Wissant – get a breath of fresh air on the Opal Coast

There is a beautiful stretch of coast just across the French border. Nature is plentiful. Here the beaches, rocks and the bocage landscape are the main attraction and tasty, affordable food is the norm. Wissant, with its central location, is an ideal base for exploring the Opal Coast.

The Opal Coast is a relatively unknown part of the northern French coast. It starts at the port city of Dunkirk, on the border with Belgium, and runs to Berck-sur-Mer at the mouth of the Otie. An area that will ring a bell with few Dutch people. Neither is the French name Côte d’Opale. And that while this 120 kilometer long coastal strip of the Pas-de-Calais offers everything for a great holiday. Charming seaside resorts and picturesque fishing villages, beautiful wide sandy beaches, imposing white chalk cliffs, endless dune areas and a rolling green hinterland. Plus good food, all within a three to four hour drive. Here you can really change your senses; swimming, sports, walking, cycling, beach fishing, kite flying or blokarting. Our southern neighbors have already completely discovered that. Now we still do! Time for one vacation in Wissant and an exploration of the Opal Coast.

The North Sea coast in the vicinity of Dunkirk is fairly flat with a modest dune strip, but the character of the coast changes as you go further west. Just past Calais, the French polder landscape slopes down and you end up in a coastal region full of rugged cliffs. The Opal Coast has two prominent capes (the Site des deux Caps) along the narrowest part of the Channel; an unavoidable stage on the Opal Coast. This nature reserve includes Cap Blanc-Nez (a French version of the originally Dutch name Zwartenesse) and Cap Gris-Nez (NL: Blankenes), two capes that mark the chalk coast of 23 kilometers in length, with chalk cliffs rising high above the sea. Rent a sturdy e-bike or take one of the hiking trails in the area, and enjoy the magnificent cliffs and magnificent views of the coast. 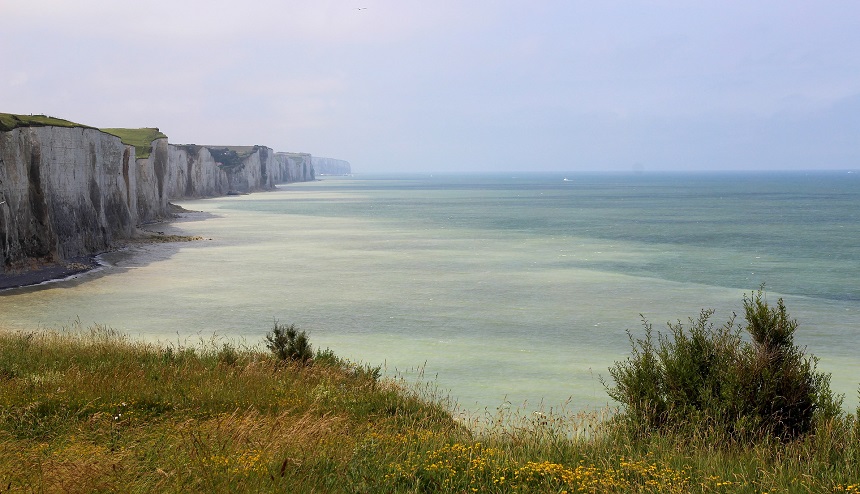 Cap Blanc-Nez is often seen as the more spectacular of the two; the 134 meter high chalk cliffs are geologically identical to the White Cliffs of Dover, some 30 kilometers across. In clear weather you can even see the chalk cliffs of Dover with in between the opal blue sea where ferries sail to and from. Cap Gris-Nez, south of Cap Blanc-Nez, looks less spectacular than its white counterpart with its 50 meters height, but the view is just as breathtaking. You look out over Cap Blanc-Nez, the Bay of Wissant and the port city of Boulogne-sur-Mer. Because the Channel is the narrowest here, you have the best view of England.

The contrast with Cap Blanc-Nez is striking: no steep white cliffs, but immense brown boulders that seem to slide into the sea. And they do that literally, because the rocks decay relatively quickly. Cap Gris-Nez is a beautiful place for a sunset. Not only the colors of the sky change dramatically, but also those of the sea. A moment to become silent.

Both cliffs are dotted with crumbling World War II bunkers as this was quite a strategic place so close to England. These bunkers were once part of the 5000 kilometer long Atlantic Wall that the Germans built to counter an Allied invasion. On the Opal Coast, the line of defense was strongest because the occupiers were convinced that the invasion would start here. Anyone who knows a little bit about history knows that they were well misled by the Allies. Close to Cap Gris Nez, such a gigantic bunker has been converted into an army museum. In the bunker complex Batterie Todt you can learn a lot about the Second World War in France. History buffs can also visit the Museum 39-45 in Ambleteuse. Further inland, in Mimoyecques and Eperlecques, near Saint Omer, are old launch bases of V2 and V3 rockets used for the Blitz on London.

The Bay of Wissant is located between the two rocky capes. The charming seaside town of Wissant is centrally located on the Opal Coast, at the foot of Cap Blanc-Nez. A cozy square with a church and terrace, a large sandy beach and a long boulevard by the sea make this nostalgic fishing village a popular holiday destination. It’s not too big, so even in summer, when the local population is eightfold, it still retains a fairly small-scale look.

The location of Wissant (from Dutch: Witzand) makes it a good starting point for walks. Hiking trails around Wissant offer beautiful panoramas of the chalk cliffs and the hinterland. From Wissant you can easily walk to the two capes, where you have the choice between the waterline and the dunes or cliffs, along the G120. When you walk on the beach towards Cap Blanc-Nez, pay attention to the large tidal difference! At low tide the beach is very wide, but at high tide you have to choose the route through the dunes. It runs between Wissant and Cap Gris-Nez Circuit du Fartz, a walk through the nature reserve that lies behind the first row of dunes. Four large signposted hiking trails start from Wissant, from 19 to 27 kilometers long. The circuits Entre les Monts and Le Mont the Couple are also suitable for mountain bikers.

Wissant is surrounded by extensive fields and a special wetland area – breeding area and a passage area for migratory birds. Bird watchers will love it ‘Sentier du Fartz‘, a short walk around a lake along five bird huts.

There are also many nice towns and villages, where you can relax after an active day in nature. In the towns you will find nice harbors and you can eat delicious fish dishes. Charming fishing villages and seaside resorts with Belle-Epoque buildings alternate. Explore the seaside resorts and villages to discover architectural and historical gems. Wimereux and Le Touquet-Paris-Plage have a completely different atmosphere than Wissant. These towns exude a bygone Belle Epoque class, and the beach is beautiful. Take a drive to Ambleteuse with its 17th century Vauban fortress. You can visit it at low tide, at high tide it is in the middle of the sea and it is particularly spectacular when the waves crash on it. 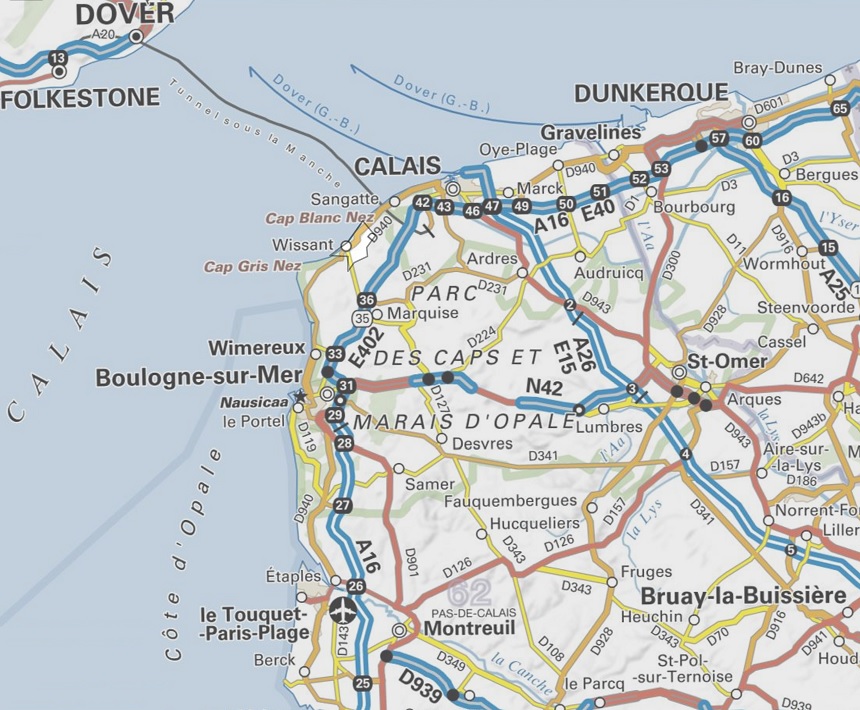 The Opal Coast from Dunkirk to Berckx

Take a look at the historic district of Boulogne-sur-Mer, and take a walk on the old city walls with a sea view, best at sunset. Visit the fortified town of Montreuil-sur-Mer or look for the belfries of Nord-Pas-de-Calais. Go on foot or by bike across the vast grasslands where the sheep graze, or straight through the pine forest. Sangatte, Escalles, Gravelines, Hardelot, Etaples, … along the entire Opal Coast you will find picturesque villages where time had little influence. Audresselles in particular remained very authentic. And what’s a bonus, in Audresselles you will find the best fish restaurants on the entire Opal Coast. 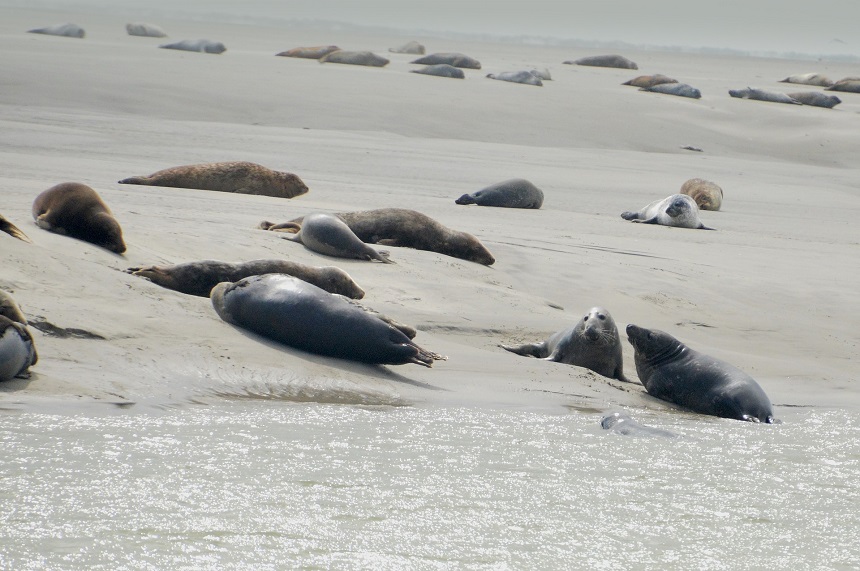 Another beautiful nature reserve is the bay of Authie near Berck, a place where seals like to come

Get a breath of fresh air on the Opal Coast

The Bay of Wissant is a paradise for (kite) surfers and the wide beaches of Wissant are ideal for blokarting (Char à Voile). Wind is the undisputed playmaker on the Opal Coast and water sports enthusiasts will get their money’s worth on the Opal Coast. In addition to sand yachting and kite surfing, you can also enjoy sailing, sea kayaking, kite flying, stand-up paddling and surfing. For beginners, there are plenty of opportunities in the area to rent a surfboard and take lessons. For the best view and the strongest wind, climb the cliffs. The Opal Coast is a great place to relax! 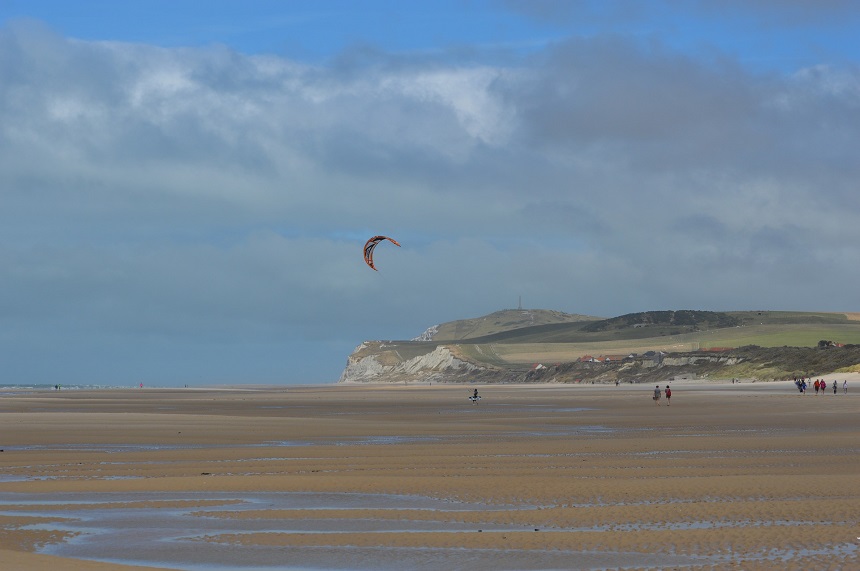 The Opal Coast is a series of surprising experiences. It is becoming increasingly clear to me why the Belgians have already embraced this area as a beloved near-by destination. Because not only the coast, but also the green hinterland and the nice towns appeal to tourists. It is a versatile destination where you can cycle, walk, water sports, sunbathe, swim, sniff culture and explore nature unbridled. The fact that you can also enjoy a meal there is a bonus.

Schiermonnikoog – the other island

Trains across Europe – a serious alternative

The unknown places of Pomerania