Where is Nepal? Things to Do in Nepal: Top 15 Tourist Attractions 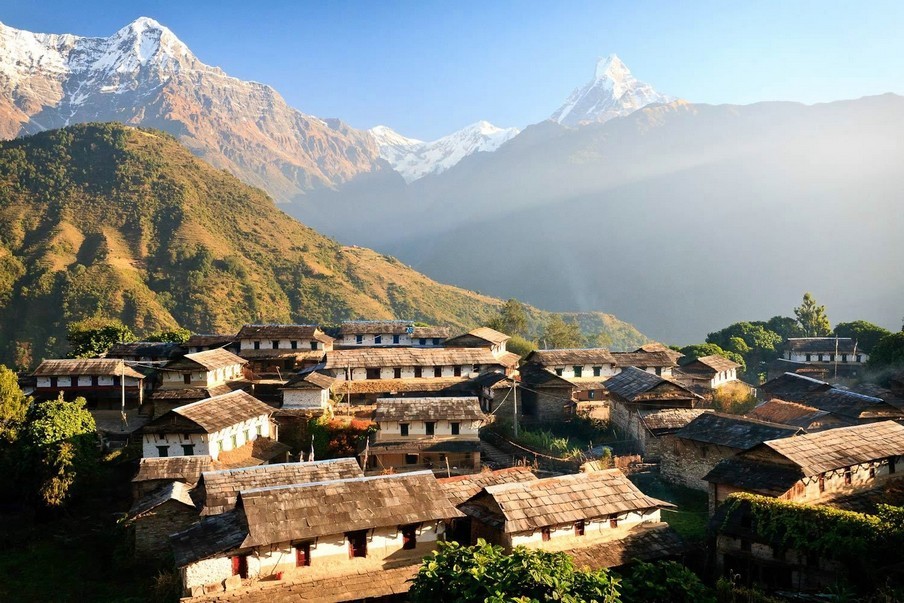 Where is Nepal? What are things to do in Nepal? Nepal is for tourists who want to go rafting and hiking in this country, meditate, inspect ancient pagodas and temples… To visit Nepal, we recommend to choose the autumn and spring months, especially to climb and enjoy beauty of the mountains. In summer, the rainy season begins, when humidity, heat and rain can seriously overshadow the holidays in Nepal.

Where is Nepal—the land of great mountains?

Nepal (capital–Kathmandu), with an area of 140,800 square kilometers, is located in the Himalayas (South Asia). Tibet lies north of Nepal and Uttar Pradesh, West Bengal and other Indian states border the state from west to east.

Nepal is called the most mountainous country as 40% of its territory is at an altitude of over 3000 meters. Nepal has 8 peaks over 8000 meters high, including Everest. Nepal consists of 14 zones – Gandaki, Mahakali, Bagmati, Narayani, Lumbini and others.

It is impossible to fly directly to Nepal from most of the countries, but those who want to fly with planes of one airline can use the services of Qatar Airways. The most convenient way to reach the destination (Kathmandu) is a flight with a stopover in India (Delhi). 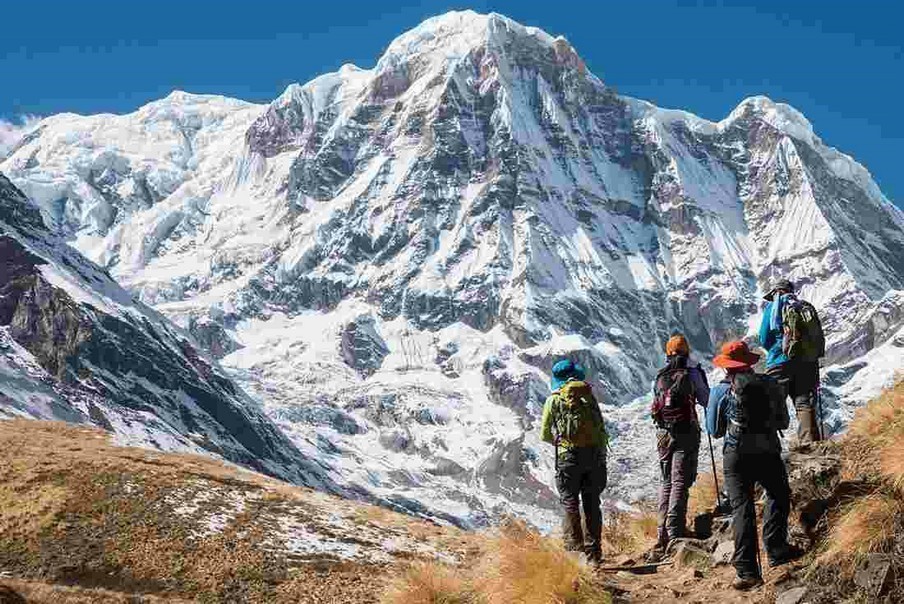 Three majestic peaks simultaneously attract the attention of a person who is in the Annapurna National Park. Three sisters—Main, Middle and East Annapurna—form one of the fourteen Nepalese peaks, whose height reaches 8 km. Between Annapurna and Dhaulagiri Peak lies the deepest valley in the world.

It was Annapurna that became the first “eight-thousander” to submit to man. In the middle of the last century, intrepid Frenchmen rose here.

If you prefer to look at the mountains from below, take one of the hiking trails in the park. Along the way you will encounter villages where locals introduce guests to the peculiarities of their lives and culture.

The name of this national park “The Forehead of Heaven” clearly indicates that there is simply nowhere higher to go. It is on the territory of Sagarmatha that Chomolungma is located—the highest mountain in the world.

Climbing one of the peaks in Sagarmatha Park is possible only for professionals. The rest can learn about the lives of the local people and, if they are lucky, observe the small panda that lives in the local forests.

The park is located northeast of Kathmandu. 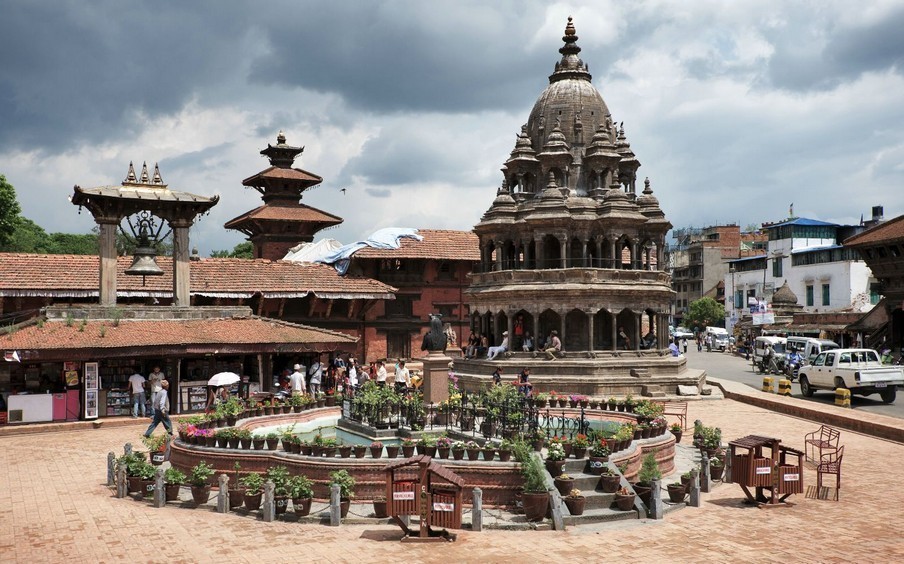 The palace square of Nepal’s capital has something for fans of ancient Hindu and Buddhist architecture. There is a complex of palace buildings where Nepalese monarchs were crowned. 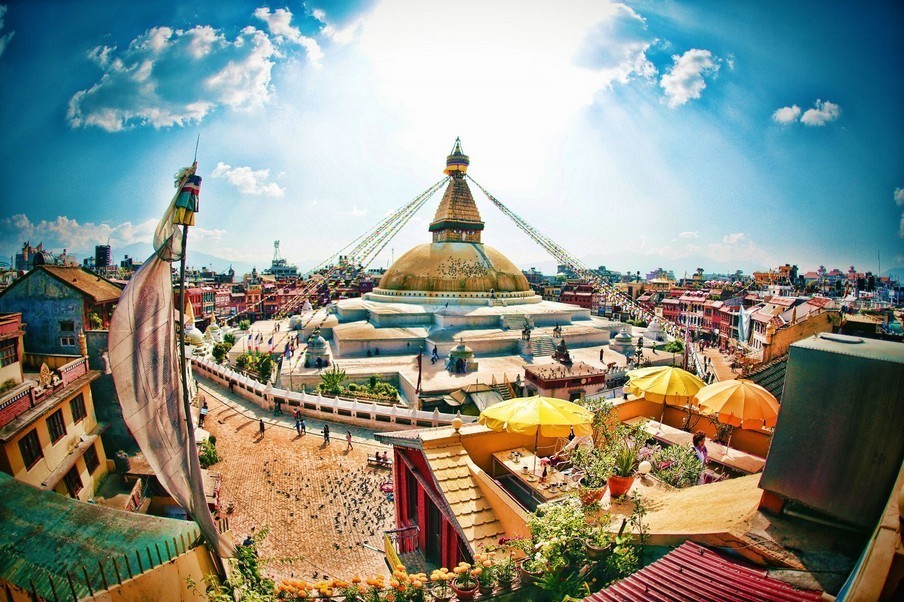 In the northeast of Nepal’s capital is the famous Buddhist temple complex, considered the main center of the Tibetan branch of Buddhism in the country. The Bodnakhta stupa was built in the 6th century, as evidenced by numerous references in historical documents.
The stupa descends from the top via terraces, each of which has dozens of small stupas installed, and the number of steps on the spire symbolizes thirteen steps to Nirvana. 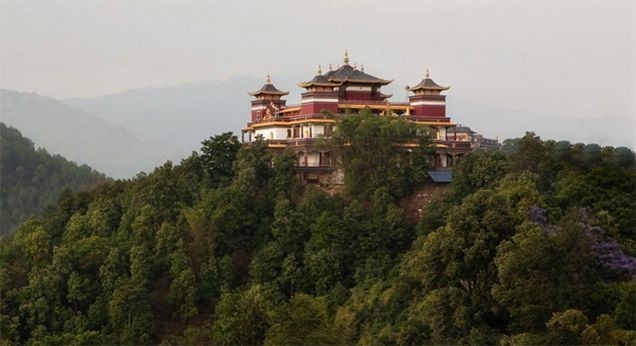 North of Bodnakht, on a picturesque peak, you will find a Buddhist monastery with panoramic views of Kathmandu. At Kopan Monastery, you can indulge in self-improvement and meditation, and professional monks will help you. The course lasts from one week to two, and while learning, someone understands the basics of Buddhist philosophy.
Specialists in curative fasting help those who want to cleanse the body.

To get there: by cab from central Kathmandu for 8-10 euros.

The cost of a 7-day meditation course: from 500 euros with accommodation in a monastery. 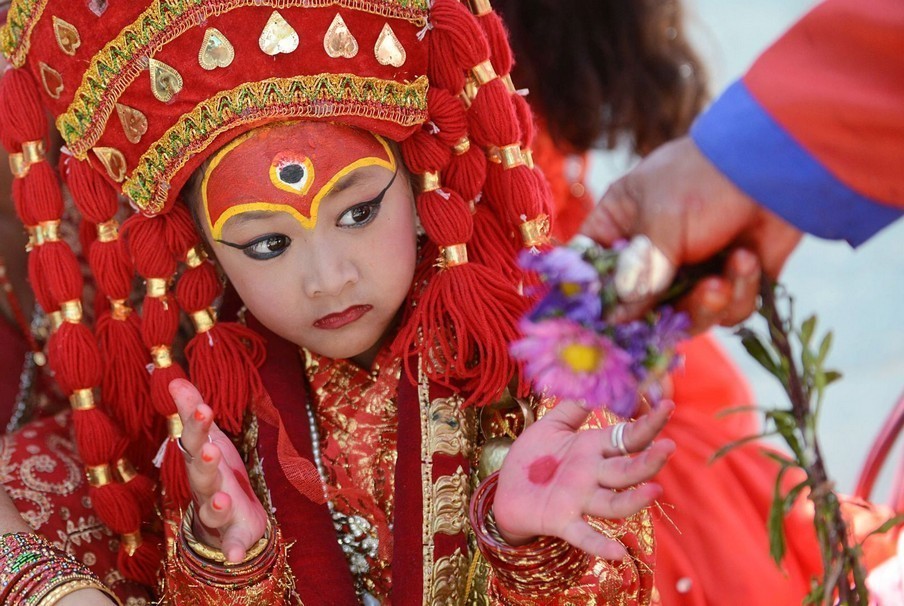 The cult of the goddess Kumari in Nepal is very strong. Kumari is considered the most influential deity and her own temple was erected for her in Kathmandu. It was built in the mid-18th century and today is located in Durbar Square. The building is decorated with intricate stone sculptures.

But the main value of the temple is inside. The priests choose a girl from 3 to 5 years old who meets special requirements. She becomes a living embodiment of the goddess on earth and remains so until she loses at least a drop of blood. Then the selection process is repeated.

You can see the girl-goddess only by chance – in the window of the palace, or by becoming a pilgrim. But anyone in the capital can see the temple of the goddess Kumari in Nepal. 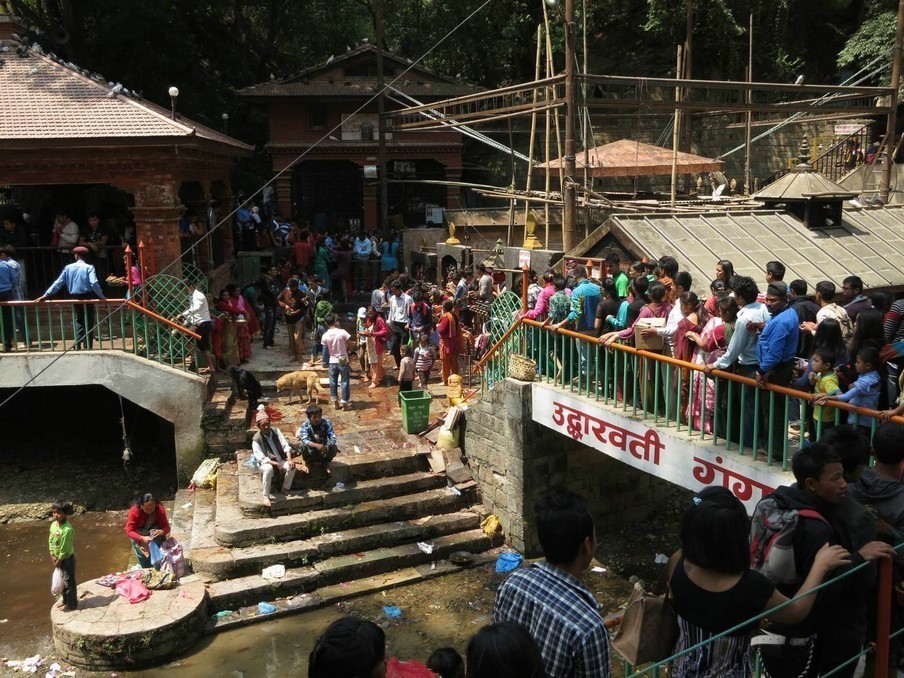 Dedicated to the goddess of death and destruction, the Danshinkali Temple is a place where Nepalis sacrifice animals. The ceremony takes place twice a week to appease Kali and give her no reason to harm people.

The peak of sacrificial rituals takes place in October. At this time, the Danshinkali Temple becomes the center of the Dasain vacation.

Address: Pharping-Kulekhani Road, Dakshinkali. 20 km from Kathmandu.
To get there: better by cab.

The oldest Hindu temple complex on the banks of the river on the eastern outskirts of Kathmandu was founded in the 5th century. Among its own kind in the country, it is the most famous. During the time of the Mogul Empire, the shrine was heavily inherited from the conquerors and in the 19th century it had to be restored.

The temple dedicated to Shiva is made in the form of a two-level pagoda, whose roofs are covered with sheets of gold and copper. Along the river are pedestals for pyres: old people come to Pashupatinath awaiting death.

The temple’s main festival is the Hindu Maha-Shivaratri festival in early spring.

The National Park in the northern part of the Kathmandu Valley was created to protect 2,000 plant species, many of which grow only in Nepal. The main ecological regions of the park are the deciduous and subtropical deciduous forests of the eastern Himalayas.

Those who are not too interested in botany will not be bored in the park either: dozens of trekking trails for tourists have been constructed on the territory of Shivapuri-Nagarjun. Lovers of Buddhist architecture will enjoy several ancient pagodas along the route. 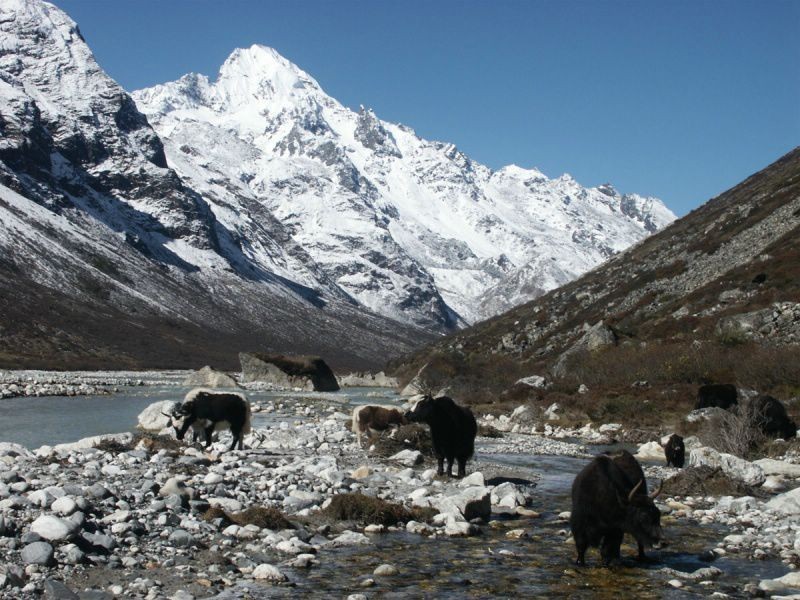 The mountainous area of Nepal, where you can see the lesser panda and ancient Buddhist temples and enjoy the beautiful scenery, is located north of the capital on the border with Tibet. It is called Langtang and in 1976 its territory was declared a national park. In Latanga there is a sacred lake for practicing Hinduism Gosaykunda.

Address: Helambu, 45007, Nepal.
How to get there: by bus or car from Kathmandu through Dhunche village to Syabru Besi village. Further – with guides.
Entrance fee: 25 euros.

In 2004, the International Mountain Museum was opened in the city of Pokhara with funds from the country’s government and donations from foreign sponsors. Visitors can learn about the history of the sport of the brave, the traditions and culture of mountain people, the peculiarities of life in the highlands.

The Hall of the History of Mountain Conquest presents many photographs of the very first climbers and pioneers. The collection includes photographs dating back to 1921.

For souvenir lovers, the museum has a store with interesting books about the Himalayas and Tibet.

In 2008, the monarchy was abolished in Nepal. The last king, Gyanendra, was forced to leave the palace and a museum was opened in Narayanhiti. Before that, the beautiful neoclassical mansion served as the main residence of the royal family for almost 40 years.
The park area surrounding the residence also deserves special attention. The palace is surrounded by a high wall and the gate at the entrance is made in the shape of a pagoda. 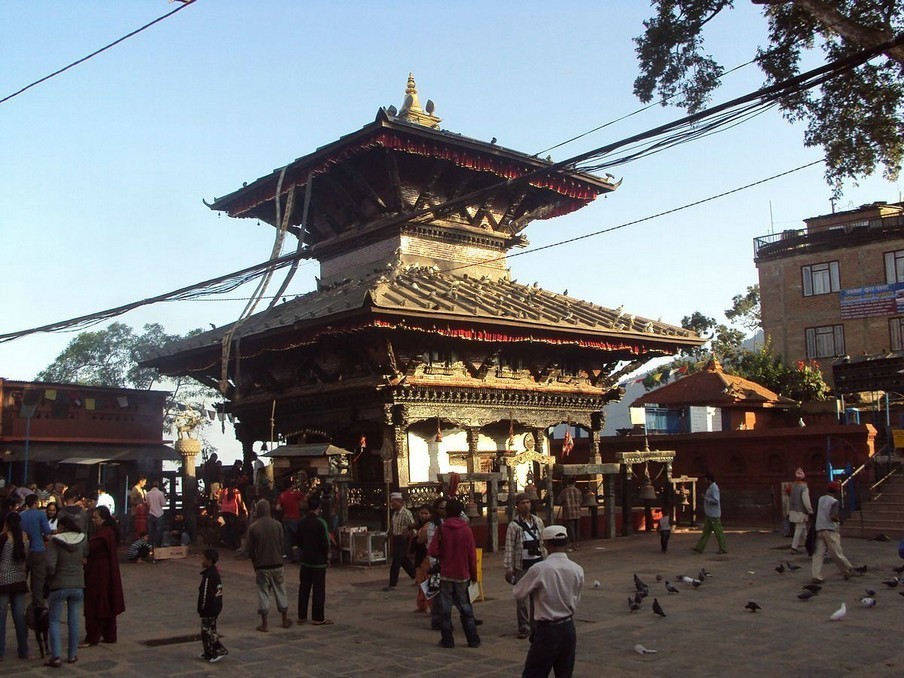 An ancient Hindu shrine honoring a terrible deity who requires sacrifices appeared on a high mountain 12 km south of the city of Gorkha in the 17th century. Legends tell that the site for the shrine was discovered by a farmer working the land. Now his ancestor is the abbot of the holy temple.

Pilgrims come to Manakamana to appease the deity, and tourists come to fulfill their cherished desire. It is believed that visiting the shrine helps dreams come true.

Address: near the town of Gorkha.
To get there: by cable car from the railway station. Up to 5 km from Mugling.

Nepal’s largest lake is located in the northwest of the country on the territory of the national park of the same name. The height of the reservoir above sea level is almost 3 km and the length of the lake is 5 km.

On the shores of Lake Rara you will find a complete list of classic Himalayan plants: rhododendron and Himalayan pine, cypress and Indian juniper. The inhabitants of the animal kingdom amaze no less with exotic diversity. On the hiking trails on the shores of Rara Lake, you’ll find little pandas, snow leopards, red wolves, leopards and the famous Himalayan bears. 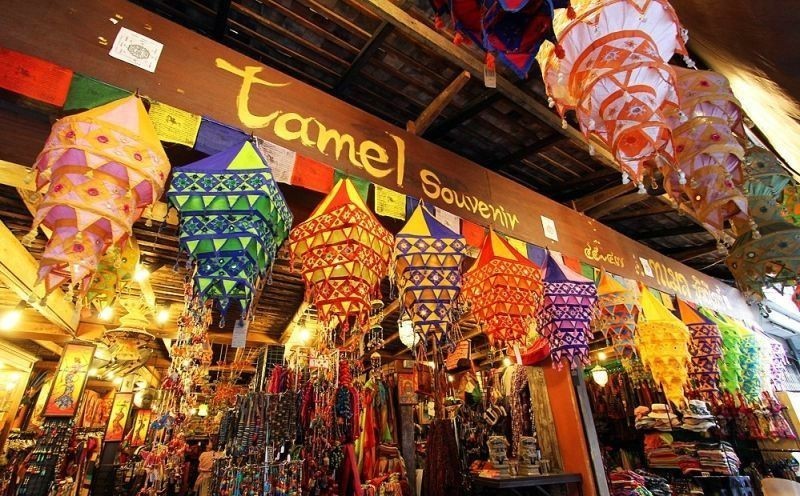 In the capital of any country, there is a special area where there are not only many tourists, but also cheap hotels, souvenir stores, markets and authentic restaurants with national dishes on the menu. Kathmandu is no exception and its tourist center is called Thamel.

In the narrow streets of Thamel you will find everything you need to immerse yourself in the real Nepal. Here you can see the daily life of the Nepalis, taste their food, listen to local music and buy souvenirs of the trip. Thamel has dozens of climbing equipment stores, hundreds of semi-legal massage parlors, strip bars and bookstores, antique and jewelry stores, and pawn shops.

Thamel is also the most criminal district in Nepal’s capital. Pay special attention to personal safety, watch your belongings and pockets, and choose cabs with identification marks only.

Previous article
The Best Countries for a Great Safari!
Next article
Things to Do in Norway: Top 15 Tourist Attactions