Things to Do In the Netherlands: Top 15 Tourist Attractions 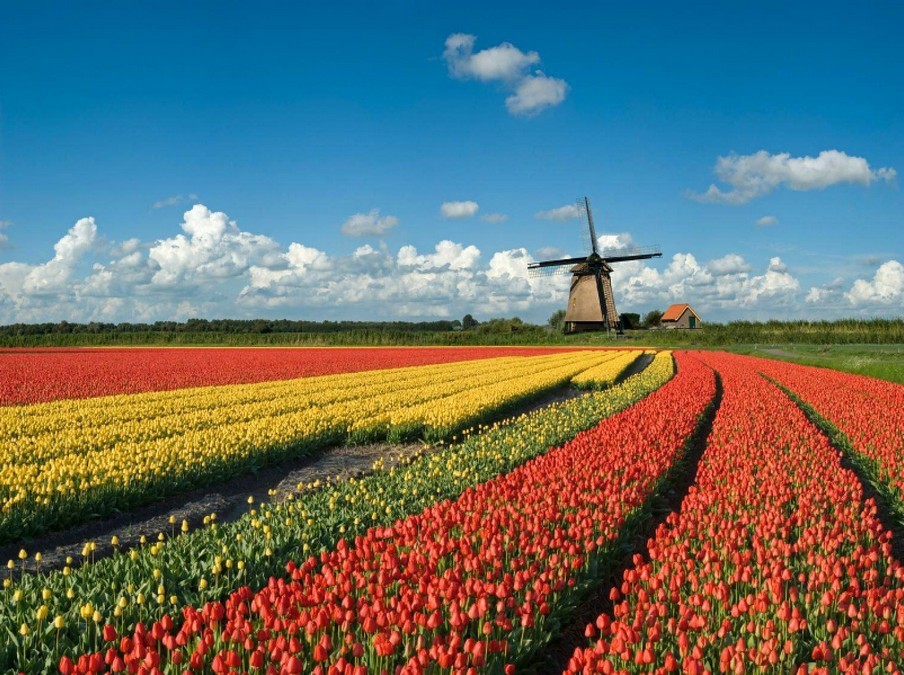 
We know a lot about Holland. It is called the birthplace of tulips, windmills and wooden shoes. In June, the herring festival is held here in honor of the opening of the new fishing season. At the end of April, the Dutch celebrate their queen, celebrating her birthday with the whole world. Everyone has heard about coffee shops, where the forbidden fruit becomes available, and about cycling madness, thanks to which both old and small in the land of tulips can boast of good physical shape. What to see in the Netherlands for an architecture or fine arts lover? On this score, you also need not worry, because the kingdom’s museums are one of the most famous in Europe.

TOP 15 sights of the Netherlands 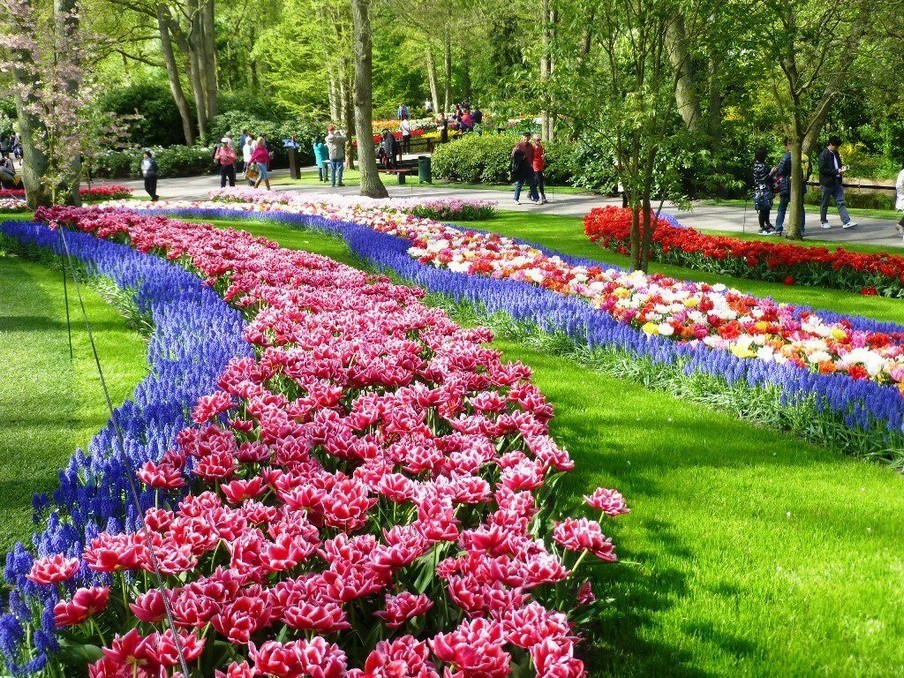 As befits the homeland of tulips, Holland knows a lot about landscape design, and its parks and gardens can safely participate in beauty contests without special training. The Keukenhof, the royal flower park in the town of Lisse, is mentioned most often in guidebooks for fans of gardening art.
In the XIV century, the Keukenhof served as a hunting ground and supplied berries and mushrooms to the table of its owners. In the 19th century, the landowners hired a contractor, the famous landscape architect Zocher, and commissioned him to create an amusement park of flowers:

The park opens to visitors every year on the 20th of March and is open until the end of May. 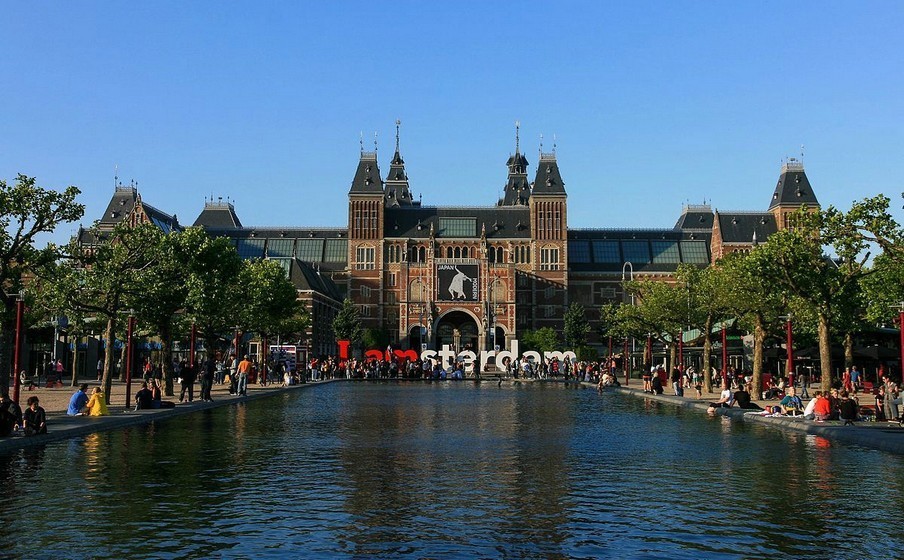 The TOP-20 most visited museums in the world invariably include the Amsterdam Rijkmuseum. Up to 2.2 million visitors come here annually.
The museum was founded in 1808 by the then King of Holland. The most important and famous exhibit of the Amsterdam museum is Rembrandt’s painting “Night Watch”, for the exposition of which in 1906 one wing of the building was rebuilt and a special hall was decorated.
In addition to Rembrandt’s masterpiece, the exhibition features works by other famous painters of the 17th century – Vermeer and Hals, Sten and Ruisdael. The rest of the halls display archaeological artifacts, sculptures, prints, photographs.
The ticket price is 17.5 euros. Object address: Museumstraat 1, 1071 XX Amsterdam. 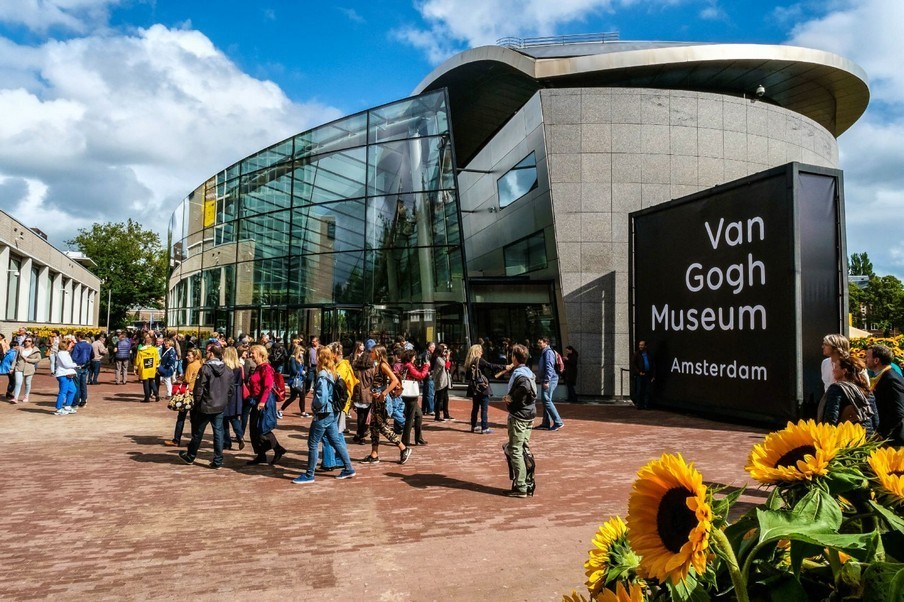 The world’s largest collection of works by the author “Sunflowers” is kept in the Van Gogh Museum in Amsterdam. Among other masterpieces of the famous Dutch painter, you will find here The Potato Eaters and The Bedroom in Arles.
The museum building was built in 1973 and today is one of the most visited tourist sites in the country. In addition to the works of Vincent “our” Van Gogh, paintings by Paul Gauguin, Henri Toulouse-Lautrec, Claude Monet and Picasso are exhibited in the halls.
The price of the visit is 17 euros, the address of the museum is Paulus Potterstraat, 7. 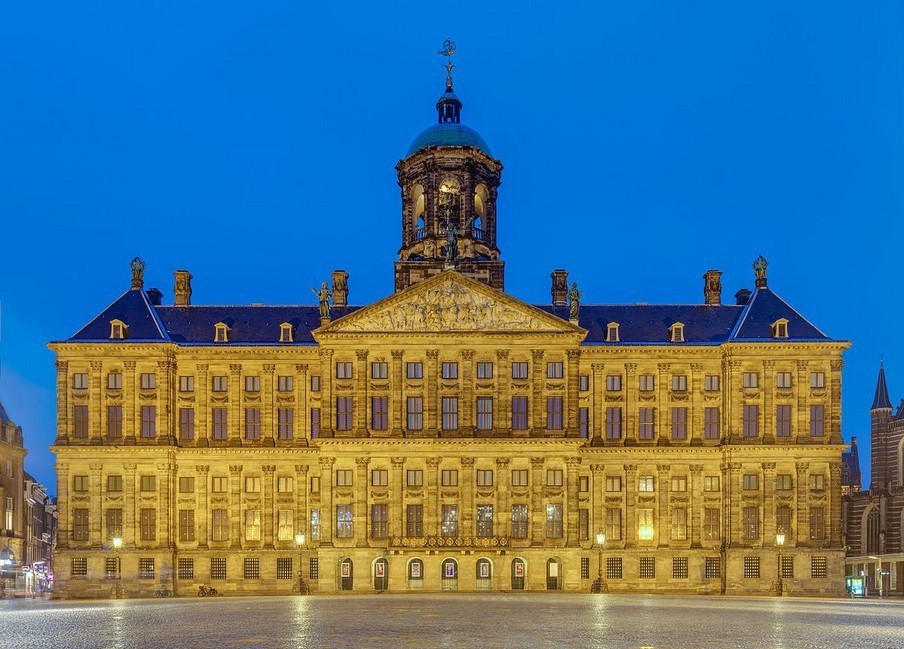 The residence of the Dutch monarchs is located in the former town hall, erected in 1665 by a local architect, inspired by Roman buildings. The author of the project emphasized the greatness of Amsterdam with the sophistication of the interiors and the strict forms of the building, made in the style of Dutch classicism.
As one of the three royal residences, the Amsterdam Palace on Dam Square also serves public functions. It exhibits the works of famous Dutch painters, and the ubiquitous Rembrandt wrote his largest canvas, The Conspiracy of Julius Civilis, for the Town Hall.
You can see how kings live every day from 10 to 17 for only 10 euros. 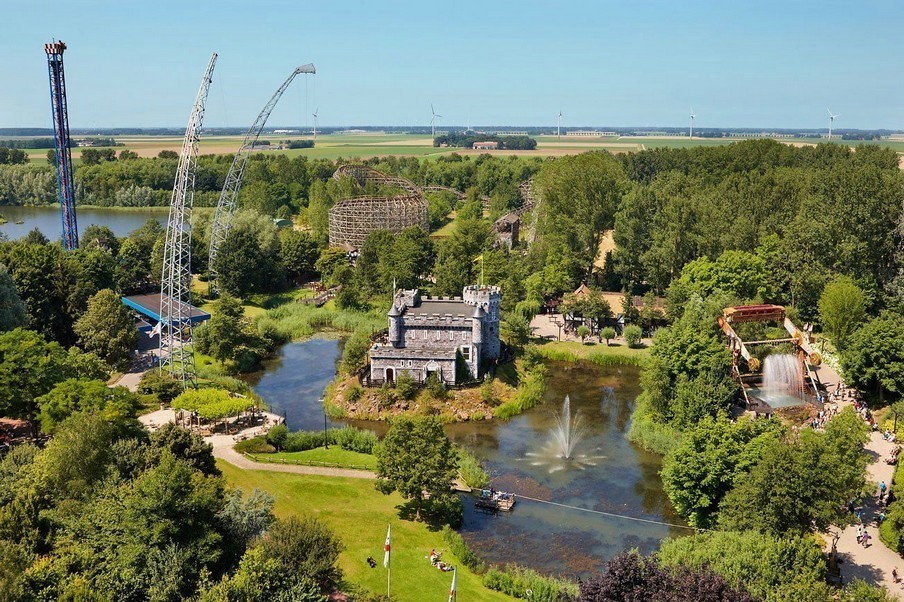 The largest amusement park not only in the Netherlands, but also in neighboring Belgium and Luxembourg, Efteling was opened in 1952 in the province of North Brabant.
The park is divided into four fairy kingdoms and the pages of the fairy tales of Andersen, the brothers Grimm and Charles Perrault come to life in front of its visitors.
During the day you can have fun on six roller coasters and three dozen attractions, and in the evening you can admire the performance that the Aquanura light and music fountain “gives”. The hotel complex on the territory of Efteling invites you to stay overnight.
The park is open daily: from 10 am to 11 pm on Fri. and Sat. and from 10.00 to 20.00 – on other days. The price of an adult ticket for a full day is about 40 euros, children under 3 years old are free. There is parking in the park for 10 euros. 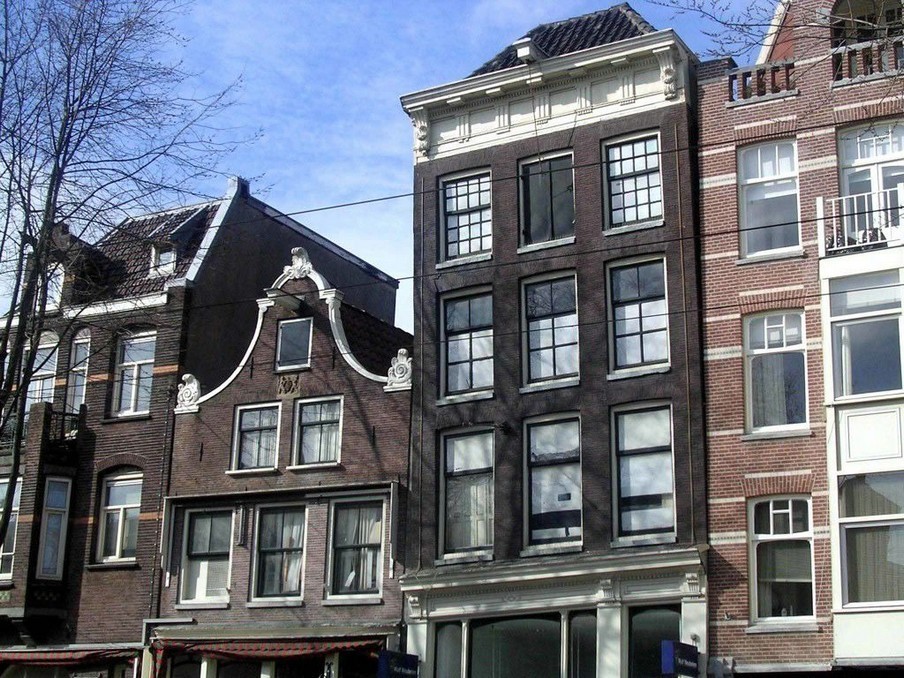 The exposition of a small museum in Amsterdam tells about the life of a Jewish girl who, during the war, hid with her family from the Nazis and kept a diary that became world famous.
The house was built in the 17th century, and a shelter was set up in the back rooms during the German occupation. The museum exhibits the original of Anna’s diary, the Oscar statuette received by actress Shelley Winters for her role in the film based on the diary, and many materials about the Holocaust.
From 9.00 to 15.30, the entrance is open for those who bought tickets online on the website. In the rest of the time, the cash desks are open. The ticket price is 9 euros. Exposition address: Prinsengracht Embankment, 263-265. 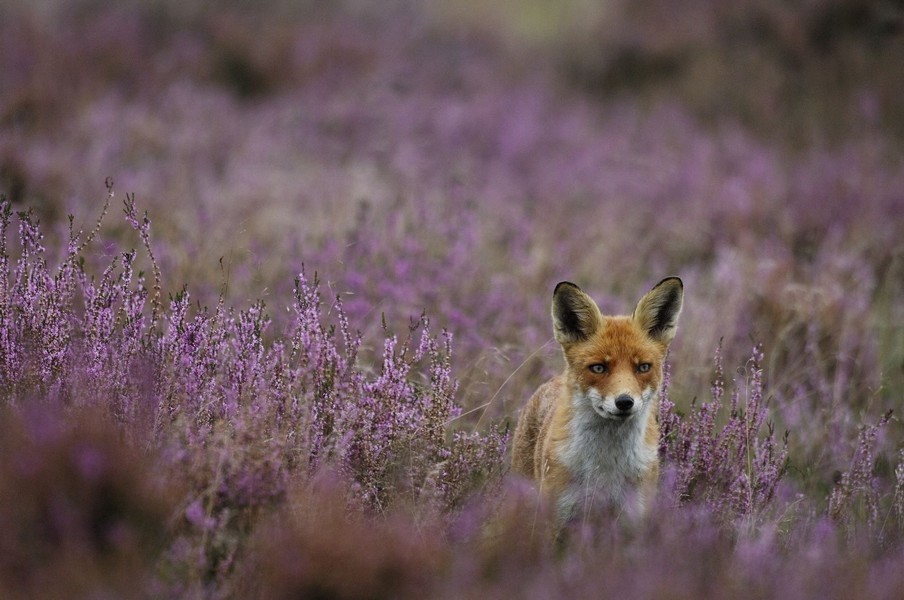 The nature reserve in the province of Gelderland represents a variety of landscape zones in northwest Europe, from heathlands to coniferous forests. The park is home to a large population of sika deer and mouflons.
The reserve was founded by the owners of these lands, who previously used them for hunting. They donated a rich collection of art objects to the nature conservation fund.
Park De Hoge Veluwe is open daily from 9.00. Entrance tickets cost 9.30 euros. You can move around the park on free white bicycles.

The oldest surviving building in the Kingdom of the Netherlands is the Oude Kerk Church, built on the site of a wooden chapel in the 14th century. It was reconstructed and rebuilt several times until the building acquired its present appearance. The architectural style of the church can be called Gothic with elements of the Renaissance, but its interior is completely devoid of any decorations.
Many famous personalities in the history of the country are buried under the vaults of the temple, and, in particular, the burgomaster of Amsterdam, Frans Banning Kok, who served as the prototype for the captain of the city shooters in Rembrandt’s “Night Watch”.
You can visit the church from 10.00 to 18.00. The issue price is 10 euros. Address: Oudekerksplein 23.

The largest science museum in the country opened in 1997 next to Amsterdam Central Station. The main function of the exposition is educational. In the NEMO Museum, most of the exhibits are made from scrap materials and are intended so that visitors can touch them and experience the world in this way. The NEMO theater is also a success, where public lectures and exhibitions on natural science topics are held. From the roof of the museum there is an excellent panoramic view of Amsterdam.
The exposition is open daily from 10.00 to 17.30 at the address: Oosterdok 2. From September to April, the day off is Monday. Ticket price – 16.50 euros, children under 4 years old – free.

The 185-meter mast was built in Rotterdam in the middle of the last century for a flower exhibition. Climbing to the observation deck is assisted by the “Euroscope” – a glass cabin that rotates for a better panoramic view. The Crow’s Nest restaurant has been opened at a height of 96 meters.
Euromast is a full member of the World Federation of High-rise Towers. Access to visitors is open from 10.00 to 22.00, a ticket costs 10 euros.

The exposition of one of the most popular sights of Holland is devoted to the history of maritime affairs and shipping. Among the exhibits are paintings telling about sea battles, maps, ancient weapons, ship models. The museum building is no less interesting. It was built in 1656 for the Naval Admiralty in the best Dutch architectural tradition.
A replica of a sailing ship that ply between Holland and the East Indies is moored at the museum’s pier, and in the thematic library you will find any book on navigation.
Museum address: Kattenburgerplein 1, Amsterdam. The exposition is available to visitors from 9.00 to 17.00. The price of an adult ticket is 15 euros. 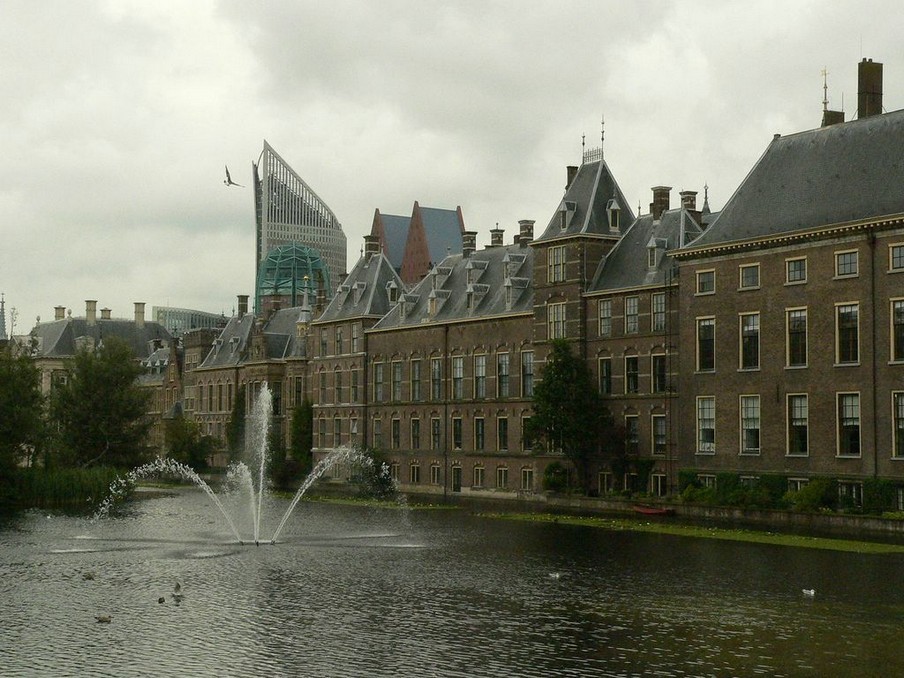 The complex of old buildings in the center of The Hague itself is of great interest to tourists. The Binnenhof quarters have been built since the 13th century, and it was from this place that the history of the city began.
The medieval castle in the Gothic style with a triangular facade, called the Knights’ Hall, looks especially colorful. Above the entrance there is a round rose-shaped window decorated with the coats of arms of the royal dynasty of the Netherlands, and the interiors are richly decorated with luxurious stained-glass windows. 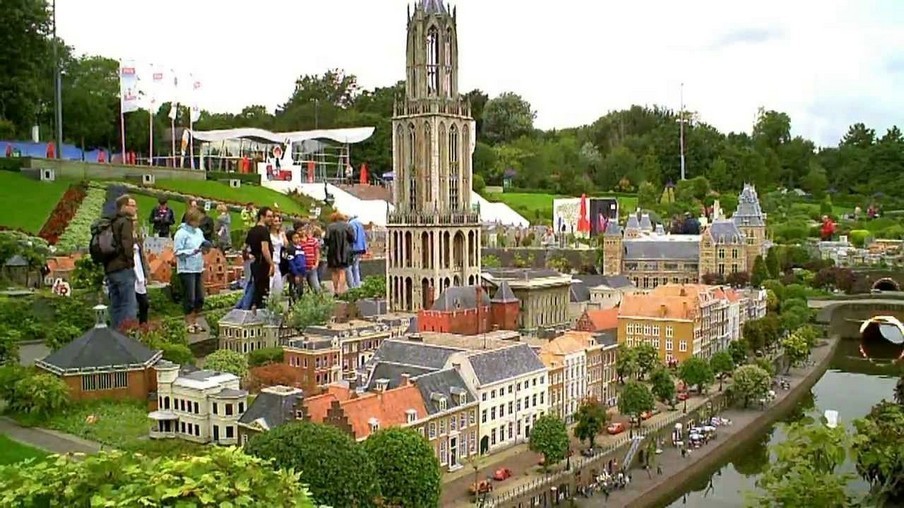 Deciding what to see in the Netherlands, but not sure if there is enough time for everything? Travel to The Hague for a miniature park in the seaside district of Scheveningen. Here you will find 1:25 scale models of all the famous landmarks of the Netherlands.
Schiphol Airport and the Royal Palace, the Canal Quarter and the Westerkerk Church, the Magere Bruges Bridge and the Rembrandtplein – Madurodam Square can quench your thirst for exploring Holland one hundred percent.
Princess Biatrix was elected the first mayor of the miniature kingdom in 1952, and today one of the students of secondary schools in The Hague holds an honorary position.
The price of a day ticket is about 15 euros.

The construction of the church in the city of Delft began in the 14th century and was dedicated to the Virgin Mary. A classic example of the Gothic style, the temple is famous for its stained glass windows and the organ, which was installed in 1839 and has about 3,000 pipes.
In addition to the service, you can visit one of the organ music concerts regularly held in the church. 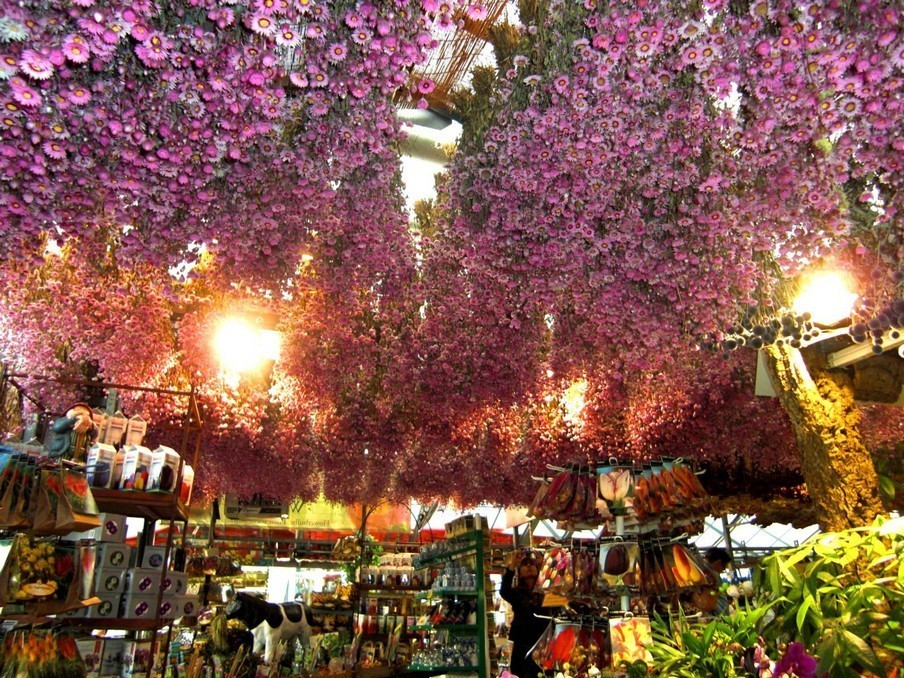 The world’s only floating flower market can be found on the canals of Amsterdam. The tradition of selling flowers by boat dates back to the 17th century. The exact address of the unique trading platform is the Siegel Canal near the main Dam Square. It is here that you can buy tulip bulbs as a gift for your friends the cheapest way.

Previous article
Where to stay in Amsterdam
Next article
Amsterdam Nightlife: What You Should Know