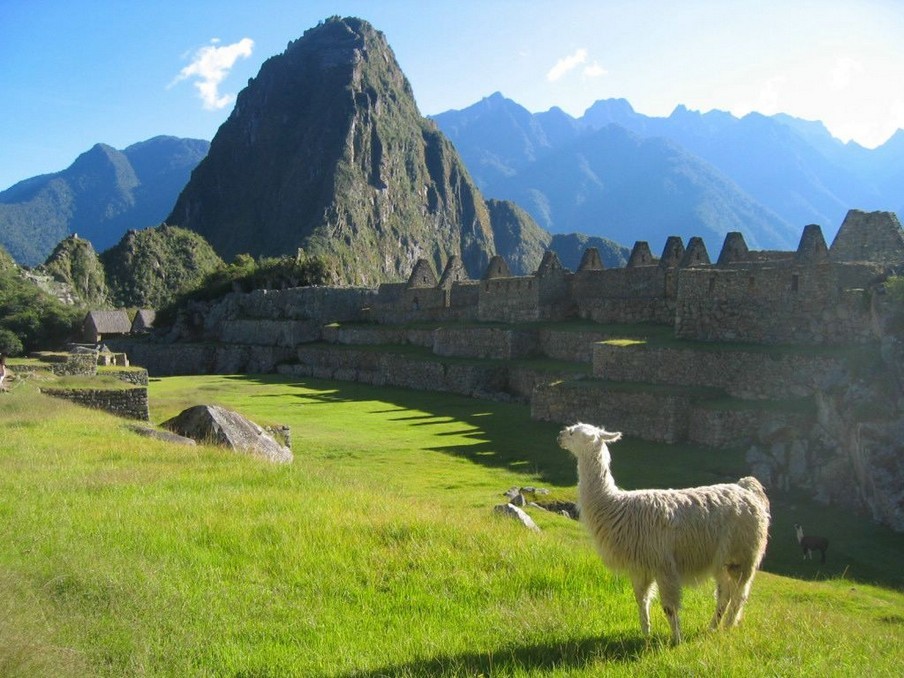 Peru is one of the countries in South America that preserves the heritage of ancient civilizations. The natural beauty of Peru is outstanding. So what are things to do in Peru? Where to go for a traveler who has never been to this country?

Almost all of Peru’s major attractions are under the protection of UNESCO. Among them: 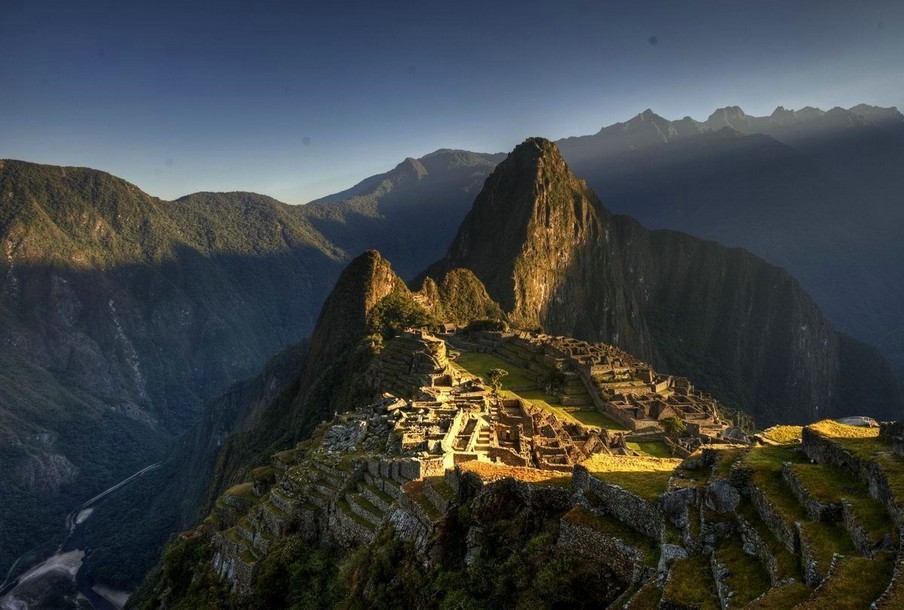 City built by the Incas in the 15th century. It seems that it floats in the clouds above the top of the mountain range. The skill of its builders amazes modern specialists.

The city’s history, the purpose of many of its buildings and even its real name remain a mystery to scientists. They have only guesses. One of the questions with no clear answer concerns the mysterious disappearance of the inhabitants of this ancient city. During the Spanish invasion of the Inca Empire, the city was abandoned. But why did the inhabitants leave it, why did they leave this beautiful refuge, which the Spaniards never managed to reach? According to a legend, the gods heard the prayers of the Incas asking for salvation from the conquerors: the city was shrouded in clouds and all the inhabitants disappeared.

For four centuries no one knew of the existence of this city (except a group of local farmers), it was only discovered at the beginning of the 20th century. 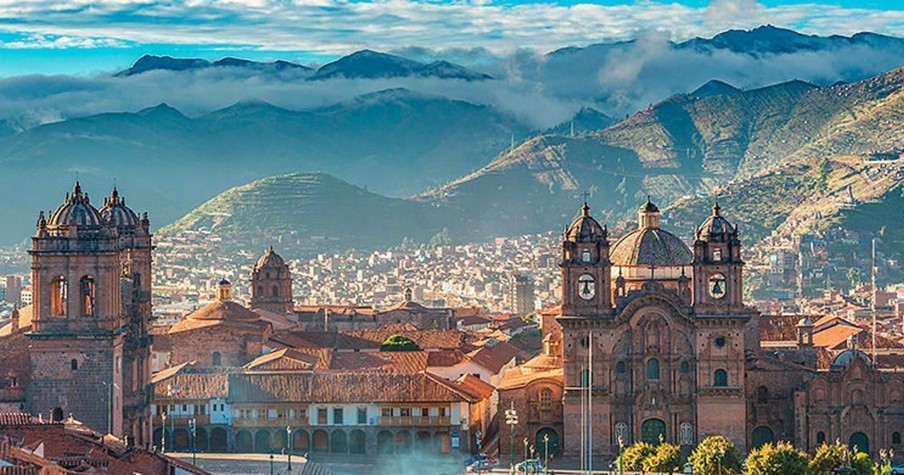 An ancient city founded by the Incas, the capital of their empire. It is certain that people lived here long before the Incas: the traces of the oldest settlements discovered at this site by archaeologists are about 3 millennia.

In the first half of the 16th century, the city was conquered by the Spanish. On the foundations of ancient temples and residential buildings, the conquerors built their own houses and churches. Often not only the foundations have been preserved, but also the walls built by the Incas. Today, these walls and foundations are the most interesting sights of the city.

Several archaeological sites north of Peru’s capital bear this name. The main buildings of this complex are two temples: the old one and the new one. They were built around 900 BC.

In the temples, you can see many images of gods, including a flying crocodile (god of food), a creature with long teeth and snake hair (god of balancing opposing forces), jaguar (god of the other world) and other gods. Images of people under the influence of hallucinogens were also found in the temples. These substances were used in religious rituals.

The temples have drains. The rainwater running over them made a sound similar to the roar of a jaguar—such were the unusual acoustics of temples.

Archaeological area, remains of an ancient city. Chan Chan, founded at the beginning of the 14th century, has long been the largest city on the continent. It was the capital of Chimor, one of the pre-Columbian Indian states. During the city’s heyday, about 60 thousand people lived here. All the buildings were built of adobe. The city contained enormous wealth (silver and gold).

In the 15th century, the capital of the ancient state was conquered by the Incas. But they did not begin to destroy the adobe city. This was done by the Spaniards who conquered the Inca Empire in the 16th century.

Today, the ancient monument is threatened with destruction due to climate change. Once precipitation was a rarity in this area, but now adobe buildings can easily be washed away.

Some parts of the ancient city are open to tourists. Travelers can see the festive halls, their exotic luxurious ornaments and other wonders of the old city. 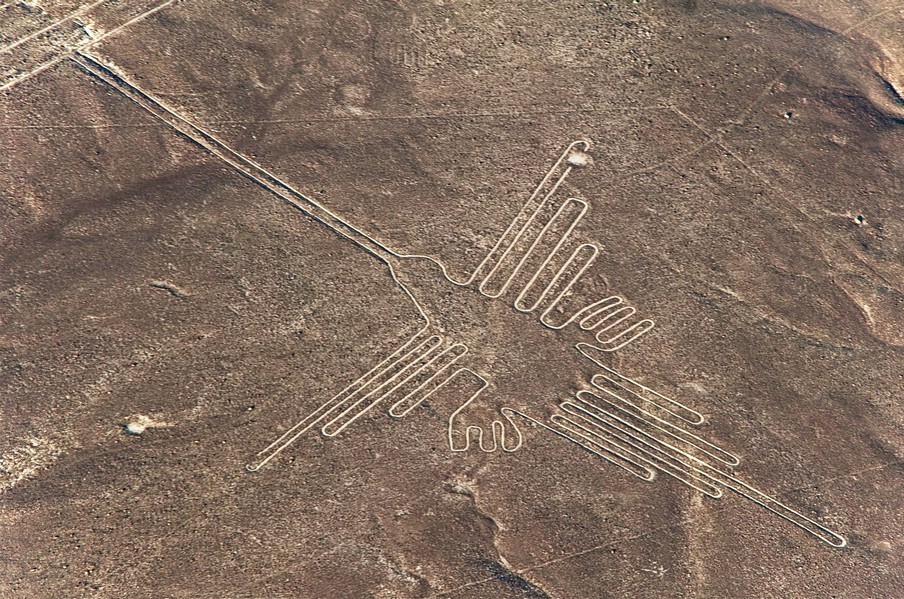 One of Peru’s greatest mysteries. Giant drawings, geometric shapes and lines found on the Nazca Plateau. They were made even before the Incas settled in this area. Scientists date geoglyphs to the first centuries AD or even earlier. Images are visible only from a bird’s eye view. They were discovered in the 1930s: they were seen from an airplane flying over this area.

Who made these gigantic drawings and for what purpose? How did the ancient inhabitants of these places manage to draw perfectly straight lines of such length, since even the methods of modern geodesy do not allow for such accuracy? Questions remain unanswered, scientists today have only assumptions.

You can see the geoglyphs by joining one of the aerial excursions, they are held here every day (but you have to book a seat in advance). From above, you can see huge images of a monkey, a condor, a spider, a hummingbird, a humanoid creature (also called an astronaut)… The flight takes about half an hour. You can also view the drawings from a special observation deck, but only two geoglyphs are visible from there.

The remains of ancient mysterious cities in Peru can be likened to magnets that attract hundreds of thousands of tourists. Among these attractions are the ruins of the ancient city of Caral near Lima.

The heyday of this city fell in the 30-28th centuries BC! It is considered one of the oldest cities not only in the country, but also in the Americas as a whole.

An interesting detail: during archaeological excavations here, many musical instruments, wicker bags, remains of monumental architecture were found, but no traces of defensive structures and not a single weapon sample were found. 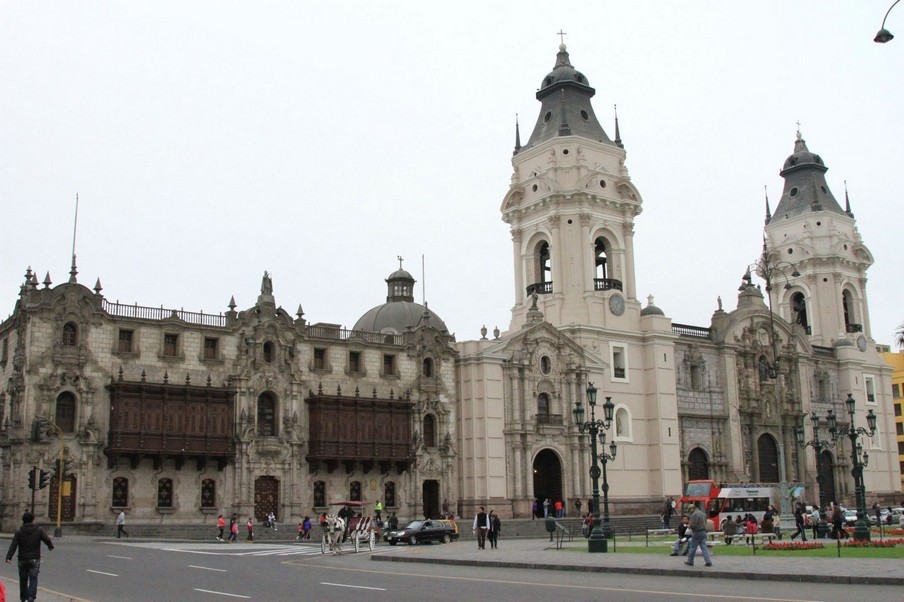 The founder of the city was Francisco Pissarro, who arrived here in the 16th century. His standard-bearer, Jerónimo de Aliaga, built a house for himself on the site where the Indian shrine used to be. Today, this house is the oldest building in town. The descendants of the standard-bearer still live in it.

In the historic center of Lima, there are many other no less interesting buildings. Among them:

One of the architectural features of the historic downtown is the large number of balconies. This is a kind of a hallmark of Lima.

A large park in the capital of Peru. It is also called the lungs of the city. There are several monuments in the park. Among them is a monument dedicated to the defenders of the country who fought in the war between Peru and Ecuador in the middle of the 20th century. Here, you can see a monument to the famous pilot Jorge Chavez and a sculpture dedicated to all mothers. 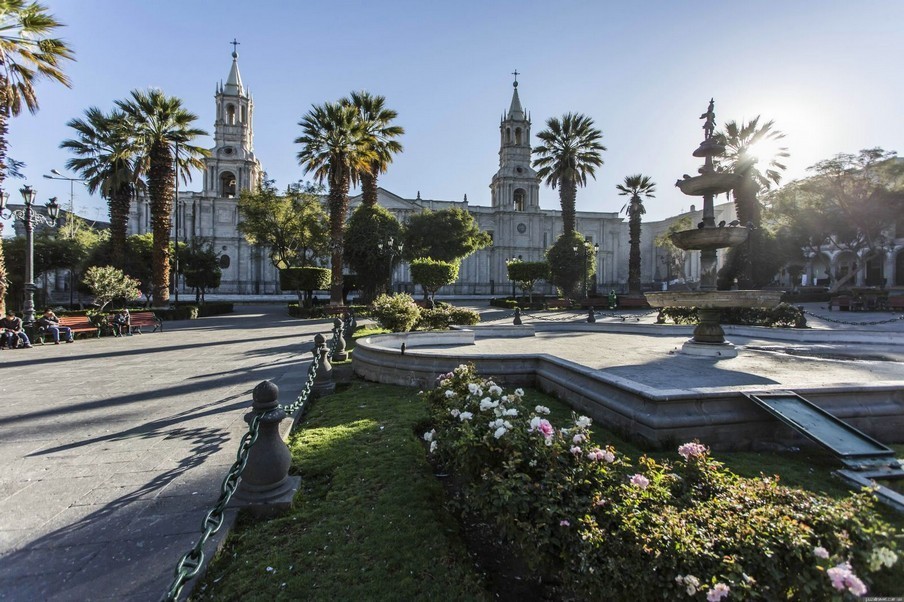 The city was founded in the 16th century by the Spanish, but people lived here long before that: in the 6th or 7th century BC the area was already inhabited, as evidenced by archaeological findings.

In the historic center of the city you will see many buildings in colonial Spanish and Andalusian style. An example of such buildings is the Monastery of Santa Catalina, founded in the 16th century.

A seaside resort near the capital of Peru. Beaches, pools, parks, tennis courts—there is everything for a perfect vacation. Surfers love this place because the sea is known for its unpredictable nature. But those who are far from surfing can have a great time in this famous resort! 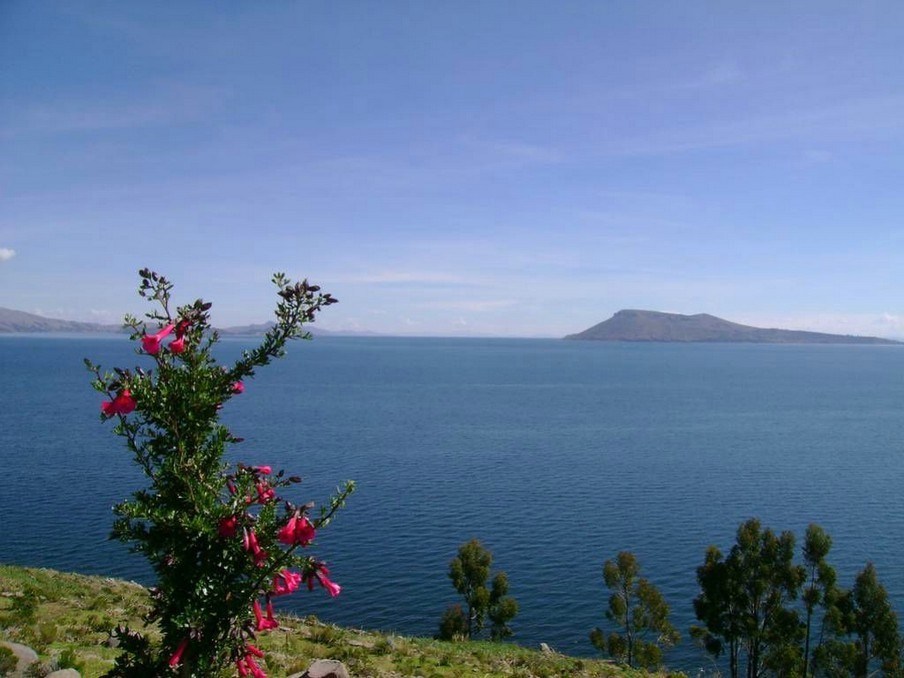 A freshwater lake located on the border of Peru with Bolivia. About three hundred rivers flow into this huge reservoir from glaciers. One of the features of the lake are floating reed islands.

Recently, archaeologists found the remains of an ancient city at the bottom of the lake—a wall, a pavement and a stone sculpture (in the shape of a human head).

National park located in the San Martin region. It is known for its incredible natural beauty. There are also several dozen archaeological sites here. The findings date back to the pre-Columbian period.

The flora and fauna of the national park are diverse. The yellow-tailed woolly monkey lives here: this species of primate was recently considered extinct. Today, it is recognized as very rare and threatened with extinction.

A national park that attracts climbers from all over the world. Named after the highest mountain peak in the country. Lovers of mountain biking, skiing and hiking amidst breathtaking natural beauty will find exactly what they are looking for here. History buffs’ expectations will also be met: archaeologists have made interesting discoveries in the park from the pre-Columbian period. 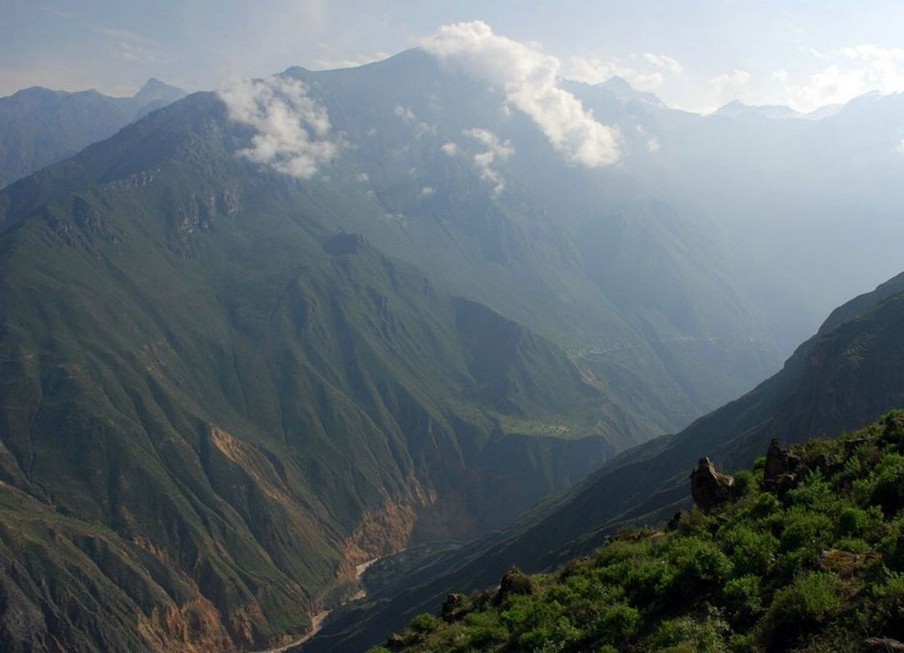 One of the largest and most picturesque canyons in the world. The river of the same name runs along the bottom, as if it were made especially for rafting enthusiasts. But tourists are attracted here not only by the amazing views, the fast flow of the river and the terraces on the slopes of the canyon, created by ancient farmers. Here, you can watch the flight of condors—amazing birds with wingspans sometimes exceeding 3 meters. Anyone lucky enough to see a condor soaring in the heights will never forget this sight. Special observation platforms have been created to spot birds in the gorge.

One of the main attractions in Peru are the paved roads built by the ancient Native Americans. They stretch across plains and mountains, climbing rocks in steps and traversing gorges with hinged bridges. There were once inns along the sides of these roads, equally spaced.

Road construction stopped in the 16th century with the arrival of the Spanish conquerors. The Spaniards, lacking the technologies known to Native Americans, were unable to continue construction and were not even able to repair the road surface.

Today, tourists from all over the world strive to see these amazing roads—the legacy of a mysterious ancient civilization.