Things to Do In Iceland: Top 15 Tourist Attractions 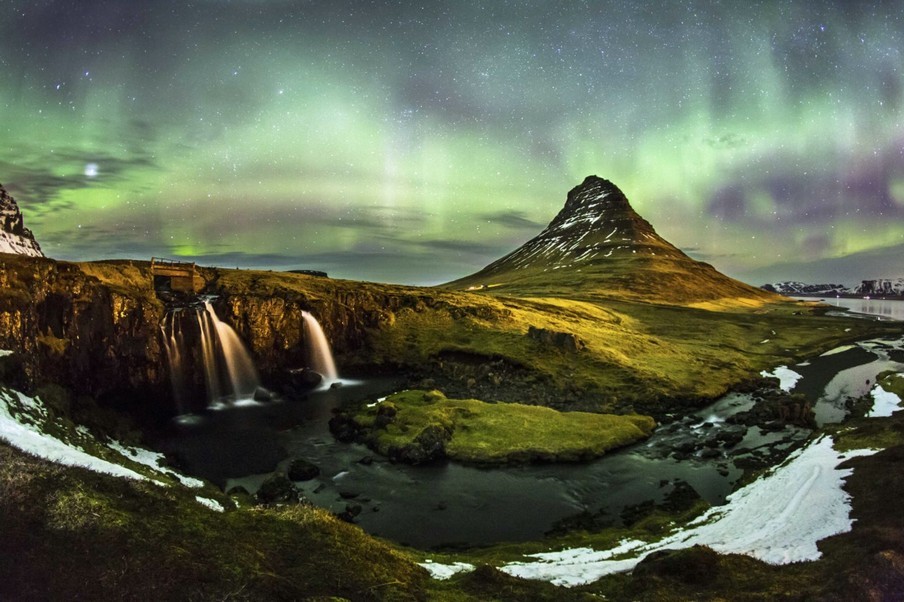 
The nature of Iceland attracts travelers with its harsh and proud beauty: stunning waterfalls and volcanoes, unique geysers and lakes … But these beauties are not inferior to the architectural masterpieces of Iceland, its historical monuments and cultural attractions. There are two UNESCO World Heritage Sites in this country – the uninhabited island of Surtsey and the Thingvellir National Park.

Surtsey is open only to scientists, but everyone can visit the national park. But this is only a small part of the incredible beauty and vivid impressions that this amazing country can offer to travelers. So what to see in Iceland, where should a tourist go first? 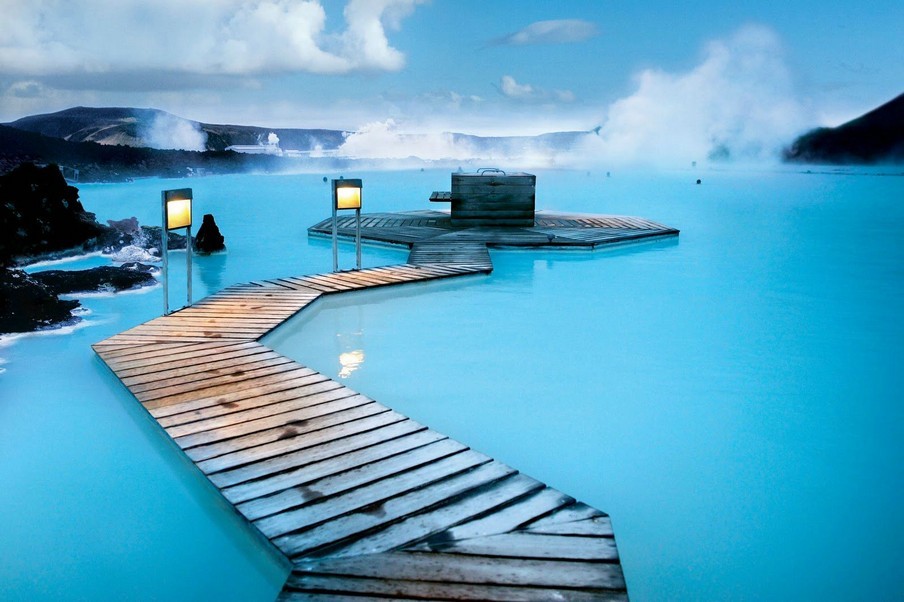 Man-made geothermal lake, a world-class spa resort. Here you can bask in the hot, bright blue water of the lagoon in the open air in winter, looking at the northern lights.

The blue color of the water is due to the high concentration of silicon. The lagoon water also contains substances that have a positive effect on the skin and the general health of the human body.

The famous resort is located 40 kilometers from Reykjavik (the capital of Iceland). It is better to buy tickets to the lagoon online, the cost of the cheapest is from 5400 to 6100 ISK (the price depends on the season and the type of ticket purchased). Children from 2 to 13 years old can swim in the lagoon for free if accompanied by an adult. 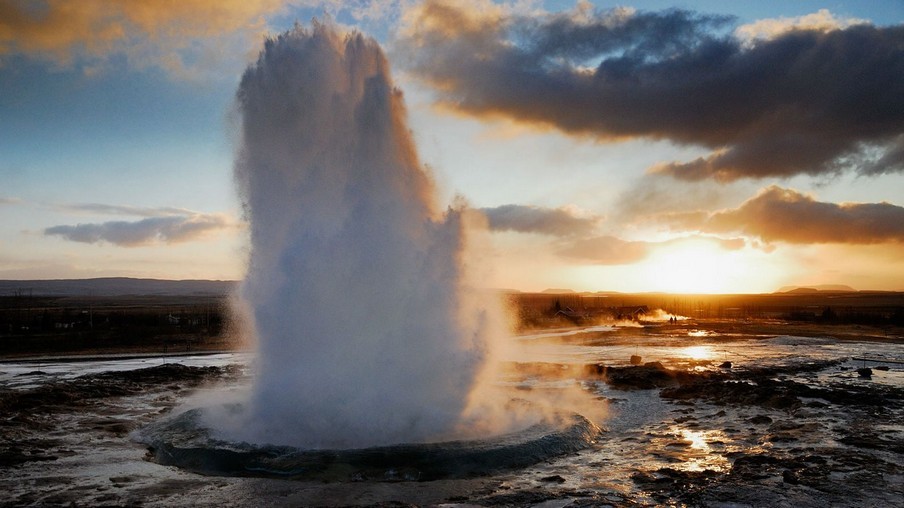 This is the name of the most famous geyser in Iceland. The first mentions of it are found in written sources dating from the 13th century. Sometimes a geyser throws hot water to a height of several tens of meters, but sometimes its activity completely stops.

Its eruptions are associated with earthquakes. One of the peaks of the geyser’s activity was recorded in the 30s of the 17th century (after another earthquake). Then the geyser was inactive for a long time, it became active only at the end of the 19th century. In 2003, there was a new surge in Geysir’s activity, later it began to decline.

During periods of complete calm, the area looks like a quiet lake, the water in which has a greenish tint. Periodically, Icelandic geologists artificially stimulate violent eruptions of the famous geyser. 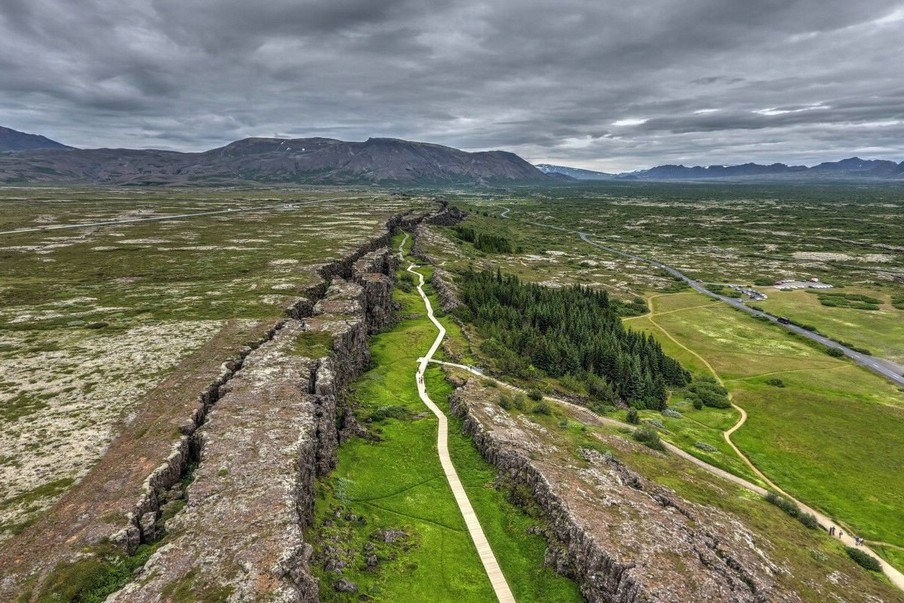 This landmark is under the protection of UNESCO. It was here in the 10th century that the Althingi, the Icelandic parliament, first met. It is the oldest parliament in the world. In the 11th century, Icelanders adopted Christianity, the decision was made by the Althing in the territory of the current national park. And in the XX century, the independence of Iceland was proclaimed here.

But the national park is famous not only for the historical events that took place here. The nature of the park is another factor that attracts many tourists here from different parts of the world. Volcanoes and glaciers, clean lakes and rushing rivers, fields of solidified lava and spruce thickets – their special, incomparable beauty always makes an indelible impression on travelers.

And there is also a rift that separates two lithospheric plates from each other, in fact separating Eurasia and North America (so that tourists can easily move from continent to continent).

The most famous and most active volcano in Iceland. It is famous for its unpredictability. Its last eruption was in 2000. Here are the dates of some of the significant eruptions: 950 BC. e.; 1104 year; 1947 year. Over the past thousand years, the volcano has erupted several dozen times.

In the Middle Ages, it was considered the “gates of hell”, and now it is one of the main Icelandic attractions. Some tourists not only climb to the top of this mountain, but even descend into the mouth.

The volcano is located about a hundred kilometers from Reykjavik. 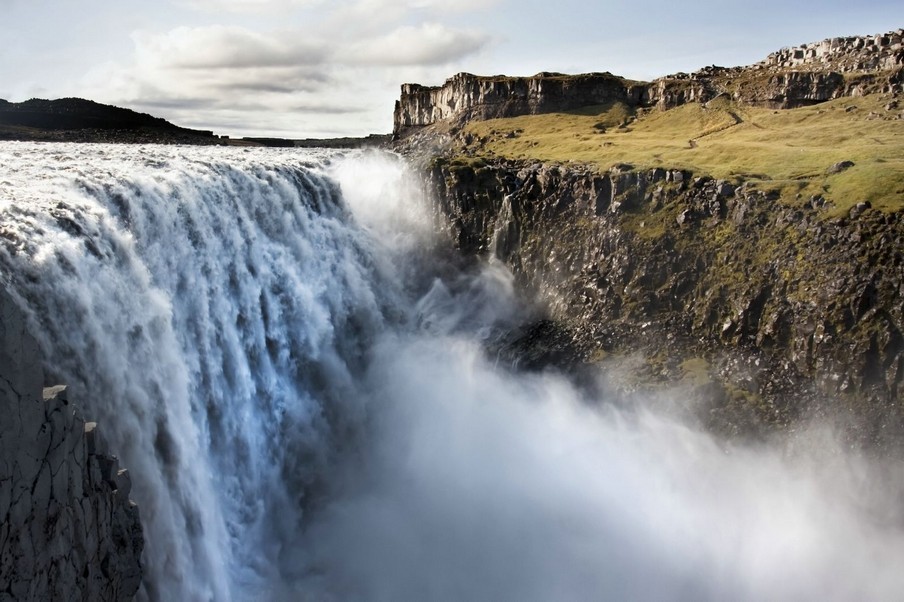 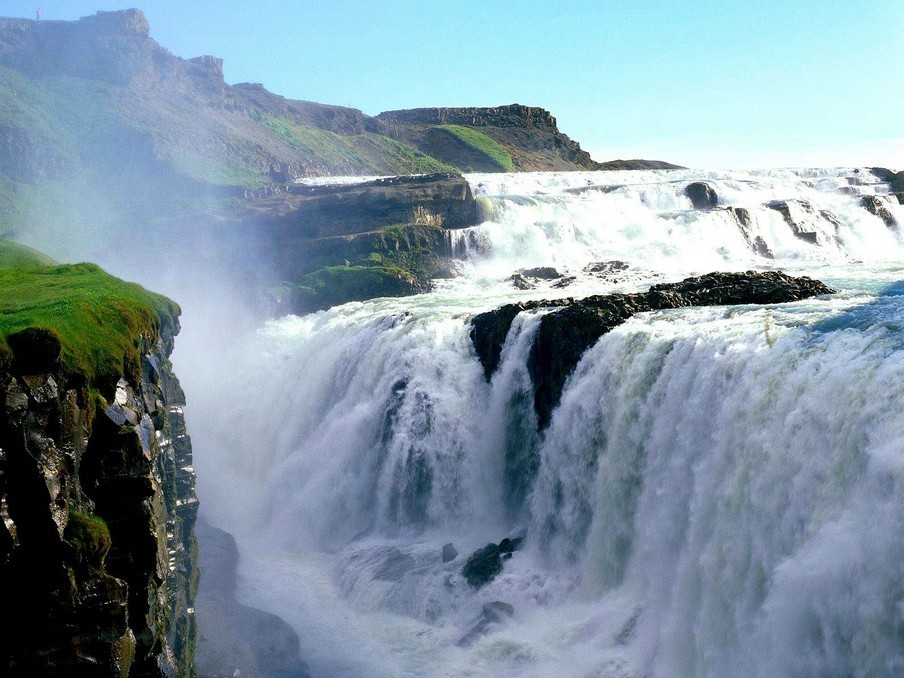 A waterfall of amazing beauty, one of the symbols of Iceland. Near it is a bas-relief erected in memory of Sigridur Toumasdouttir. Her father was one of the tenants of the area where the waterfall is located. It was decided to build a hydroelectric power station here, but this would destroy the unique beauty of the waterfall, and Sigridyur resolutely stood up for the miracle of nature. She stated that she would throw herself into the waterfall if the construction of the power plant was started. The father was forced to abandon his plans.

Not everyone is convinced of the truth of this story; skeptics argue that the power plant’s construction was hampered by a lack of money. One thing is undeniable: today the waterfall is under the protection of the state. 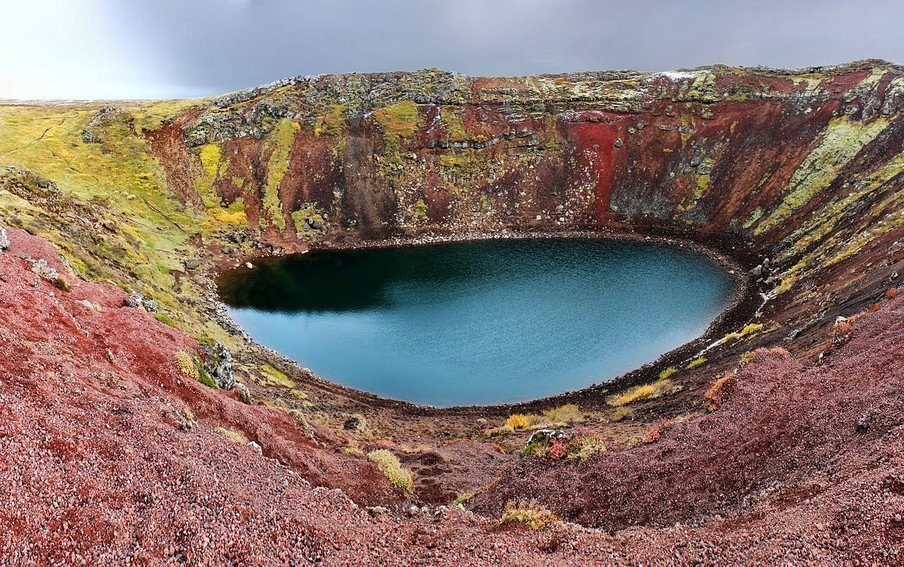 Lake formed in the crater of a volcano. There are many such lakes in Iceland, but this is one of the most famous. Water of bright aquamarine color and red steep banks, here and there in green spots (bushes and lichens) – the picture is fantastic and at the same time very picturesque. And there is also excellent acoustics: once the famous singer Bjork gave a concert on a floating stage in the middle of the water. 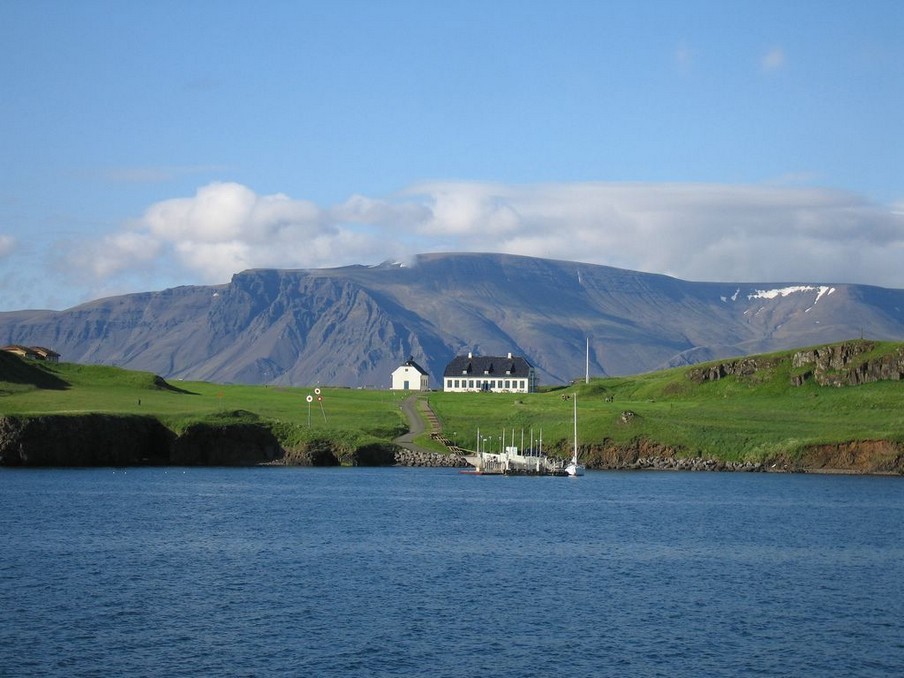 An island near Reykjavik. Many birds live here; tourists often come here to observe the birds. Some of the bird species found on the island are: eiders; snipe; silly ones; magpies; gray geese; Arctic terns; sea ​​sandpipers.

On the island is the house of the district judge, built in the 18th century – this building was the first stone structure in the country. Nearby you can see a church built around the same time – this is one of the oldest temples in Iceland. The most famous building on the island is the monument to the musician John Lennon, built by his widow in the early 2000s. 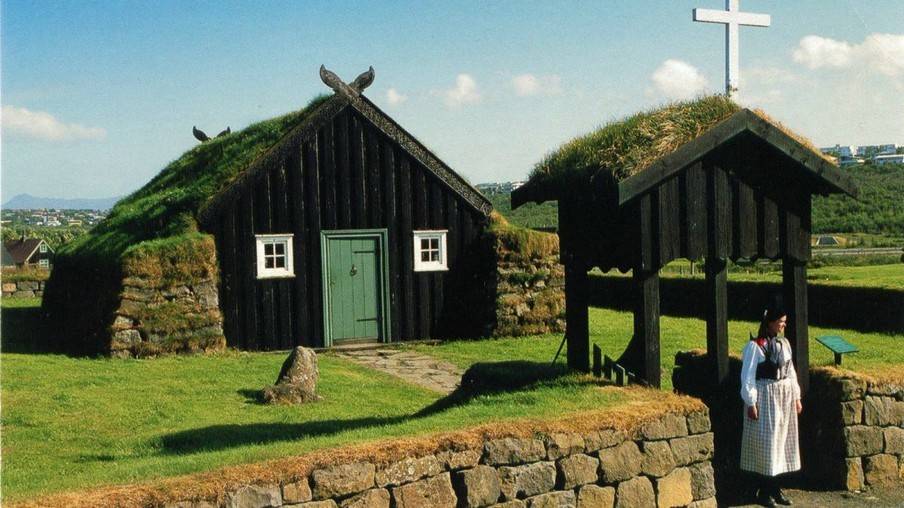 Open-air museum (on the territory of Reykjavik). Here you can see Iceland as it was in the 18th and 19th centuries: historical buildings from different parts of the country were transported here, ancient interiors were restored in detail.

Here there is a church built of peat, and sometimes even services are held there. On the territory of the museum, you can see many peat buildings covered with turf: once such houses were typical for Iceland, because timber was in short supply here.

A merchant’s house and a boy scout’s hut, a smithy and a shop, as well as many other buildings, help a tourist to feel like a real time traveler. In summer, horses and cows stroll about between the houses; young people in authentic peasant clothes completely imitate the everyday life of Iceland in the 18th and 19th centuries. A saleswoman in an old dress is standing behind the counter of the shop and is crocheting something in anticipation of visitors … 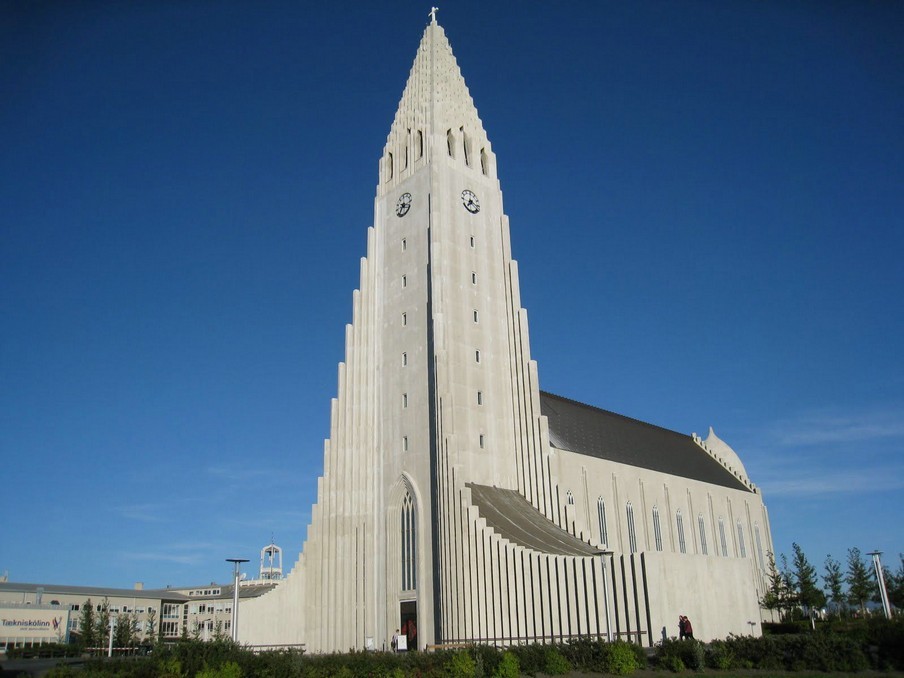 One of the most famous architectural landmarks in Iceland. Lutheran church built in the 20th century. Its project was created in the 30s, construction began in the mid 40s and lasted for almost 40 years. The temple got its name in honor of the Icelandic poet Hallgrimur Pietursson. 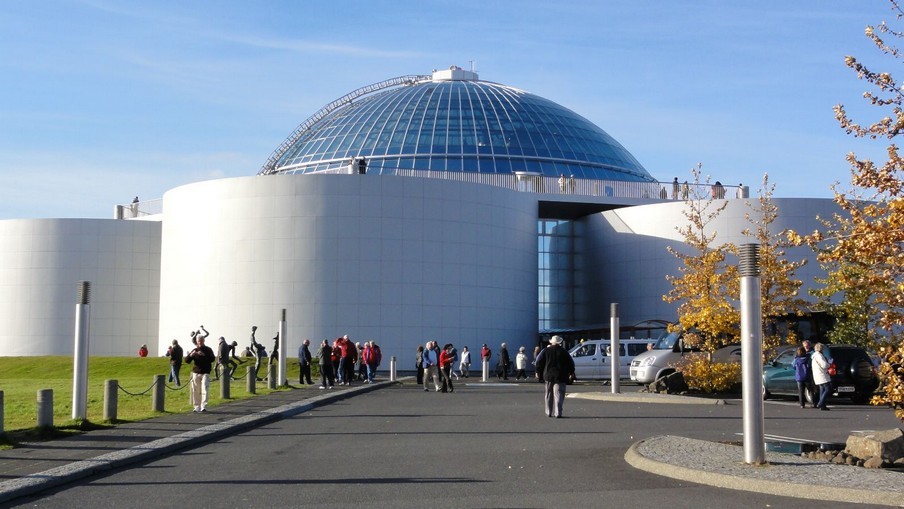 This attraction is nothing more than … the Reykjavik boiler house. Yes, yes, this is an amazing building on a high hill, reminiscent of both a chamomile and a pearl – a city boiler room. Five of its “petals” are reservoirs with water, and the sixth is a museum of wax figures.

This unusual boiler room also has shops, a restaurant, a cocktail bar, a winter garden and an observation deck with telescopes. Occasionally, this building hosts concerts of famous bands and performers. 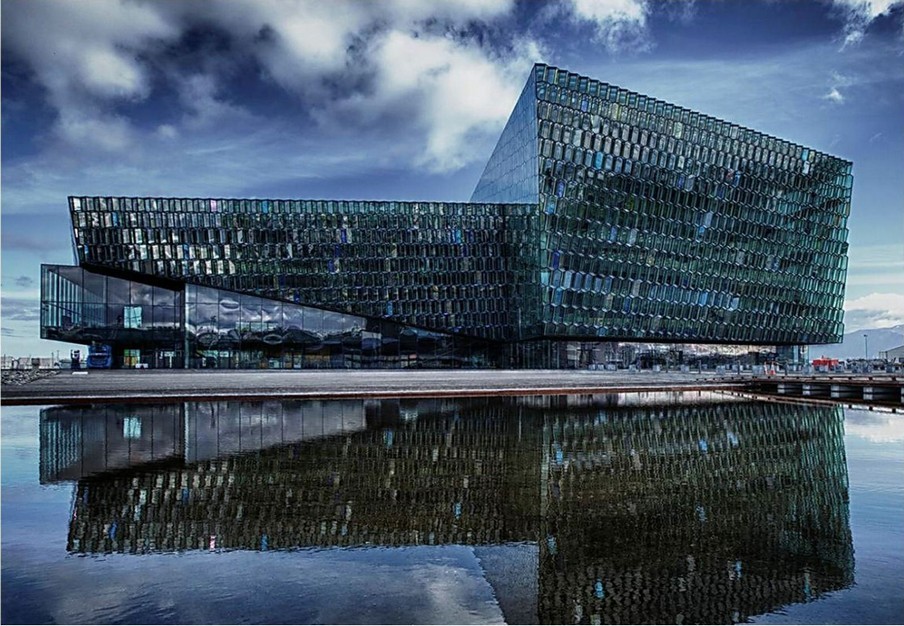 The most visited attraction in Reykjavik. A building of incredible beauty, composed of glass panels embedded in a steel frame. These panels create an amazing play of light and the feeling of a huge open space. The building has five floors, they all seem to be floating in the air. This architectural masterpiece has been awarded the European Union Prize and a number of other awards in the field of contemporary architecture.

There are several concert halls in “Harp” where celebrity performances are often held. The building also houses shops, cafes, a restaurant and a large conference center.

The entrance to “Harpu” is open to everyone on any day of the week. 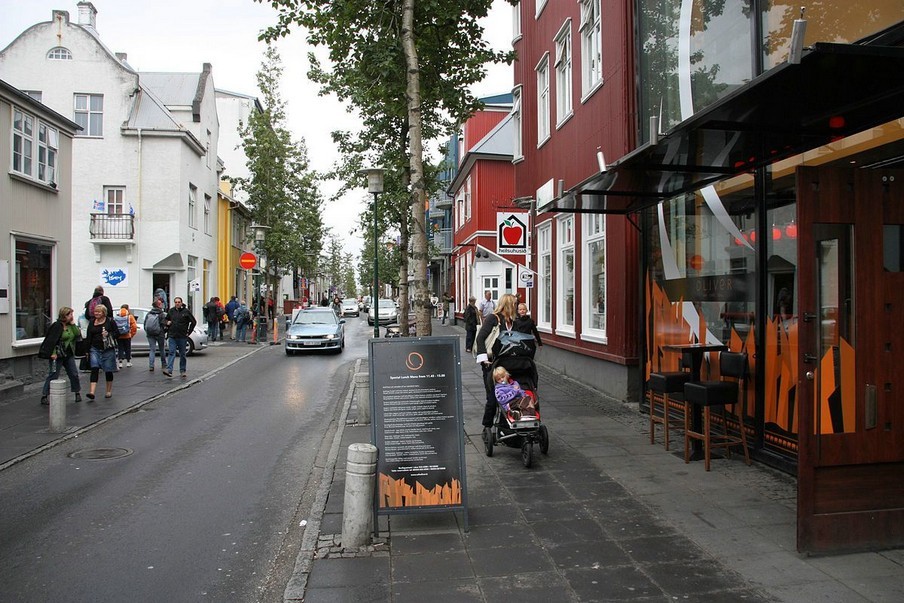 One of the oldest shopping streets in the Icelandic capital and the most famous street in this city. Shops, restaurants, clubs, bars – there is everything for those who want to shop and have a good time. There is an artificial rock on the sidewalk for those who like rock climbing. And for those who are tired of outdoor activities, there are sun loungers on the street, which you can lie down on. 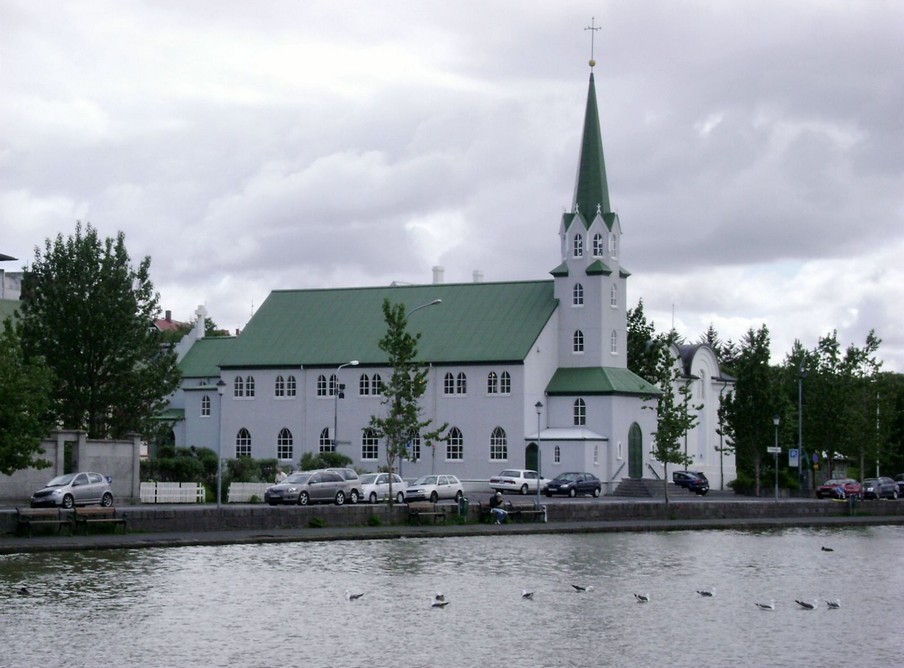 Temple of the Lutheran community, separated from the state Church of Iceland. The building is in the neo-Gothic style, built at the beginning of the 20th century.
The temple is located in the center of Reykjavik, near Lake Tjornin. The church is active, but concerts are also often held here. Here you can hear jazz and rock music, classics and folk melodies of Iceland, sometimes there are performances by pop stars. 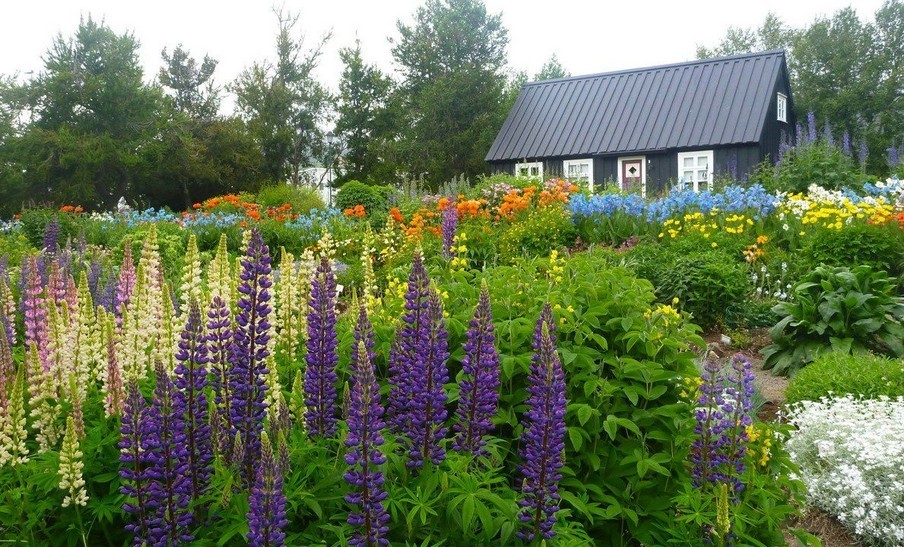 This landmark of the city of Akureyri is one of the favorite recreation places for townspeople and tourists. This is the northernmost botanical garden in the world. It was founded at the beginning of the 20th century. Today it contains several thousand plant species, and most of them do not belong to the Icelandic flora, but were brought from other places. A cafe was opened in the botanical garden several years ago. Here you can sit with a cup of tea, admiring the multi-colored splendor of the surrounding nature.

The entrance to the botanical garden is free.

Previous article
Places to Visit in Ireland: Top 15 Tourist Attractions
Next article
Things to Do in Naples (Italy)