The underground cycling gallery of Valkenburg

The Cauberg is by far the most famous bicycle climb in the Netherlands. The iconic ridge from Valkenburg is the heart of the cycling scene in South Limburg. No fewer than five world championships were held on the road here, the Tour de France arrived, passed the Vuelta and the culmination of the Amstel Gold Race traditionally takes place. More unknown is the underground cycling gallery of Valkenburg. We went in search of this hidden cycling pearl in the Municipal Cave of Valkenburg.

We are welcomed at the entrance of the Municipal Cave by Harry Habets and John Wauben. John works as project manager for the city marketing of Valkenburg aan de Geul, Harry is an experienced guide and supervisor of the Municipal Cave. However, ‘cave’ is actually not a correct name. Harry explains that the Municipal Cave is in fact a quarry, where the first marl was mined around 1500. The marl originated in the time when South Limburg was still a sea. This also explains the large amount of shells that are still in the marl. 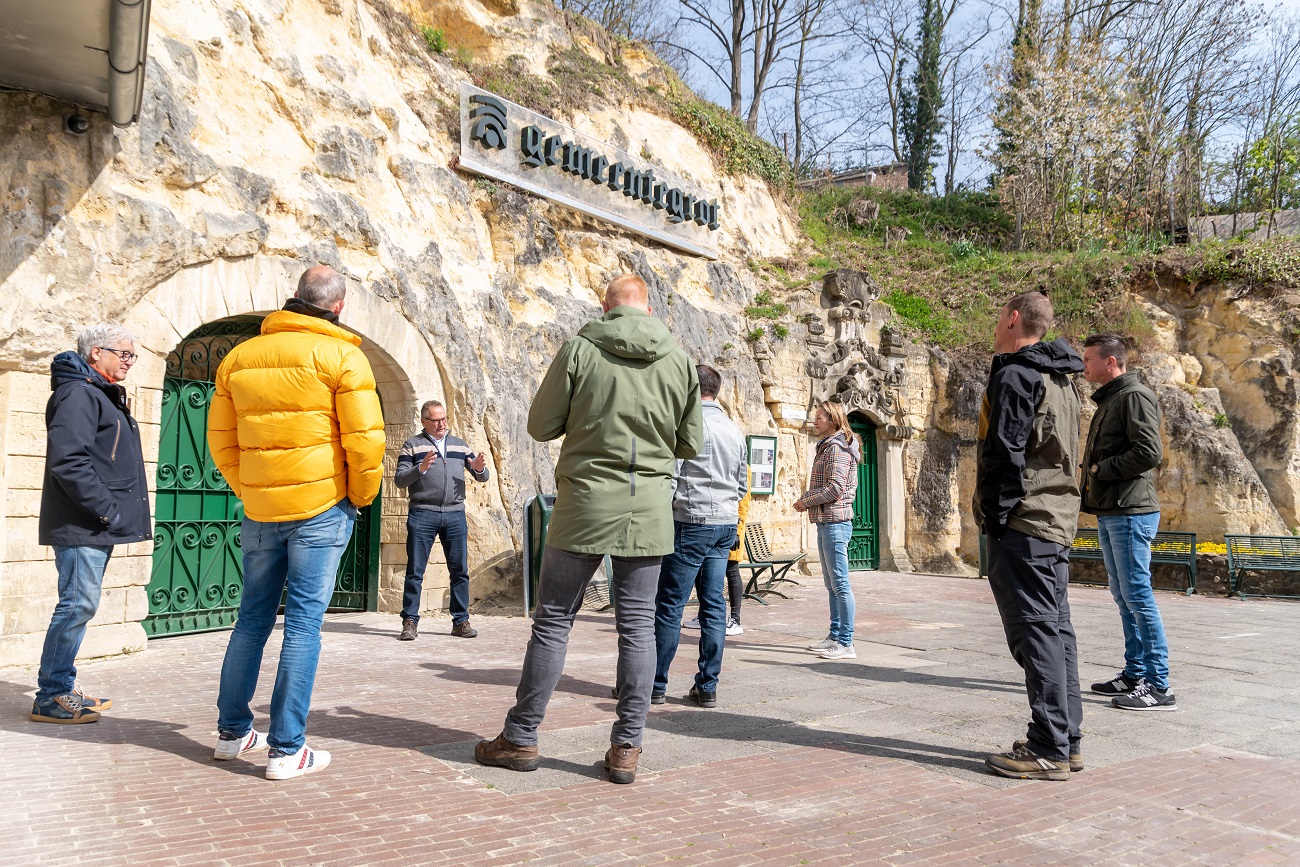 Reception at the entrance of the Municipal Cave of Valkenburg.

The Municipal Cave, known until 1892 as the Valkenburgergroef, played an important role in the development of tourism in Valkenburg. The tunnel system is 70 kilometers long and the quarry has an area of ​​114 hectares. In addition to marl mining, the quarry had many different functions, from mushroom and trout farm to nuclear shelter. And during cold winters, the cave corridors were very popular for wintering. There is a constant temperature of twelve degrees in the corridors. The people of Valkenburg liked to make use of that heat in the winter.

Harry and John tell about the history of the Municipal Cave.

American tanks, jeeps and motorcycles rolled into Valkenburg in September 1944. After four years of occupation, the Geulstadje was about to be liberated. The Valkenburgers hid fearfully – but hopefully – in the endless dark corridors of the marl caves. A safe place where people could withdraw from the oncoming violence.

After the introduction, Harry and John light two lanterns, our underground adventure is about to begin. We walk through the massive iron gate. An underground labyrinth with 70 kilometers of dark corridors lies at our feet.

After walking through the corridors for a few minutes, we see the first wall drawing. Harry tells us that we are now 25 meters below the Cauberg. He asks us to be quiet for a moment, we hear the cars passing above us. We are right under the iconic Cauberg, how symbolic. There is no better place for this cycling gallery! 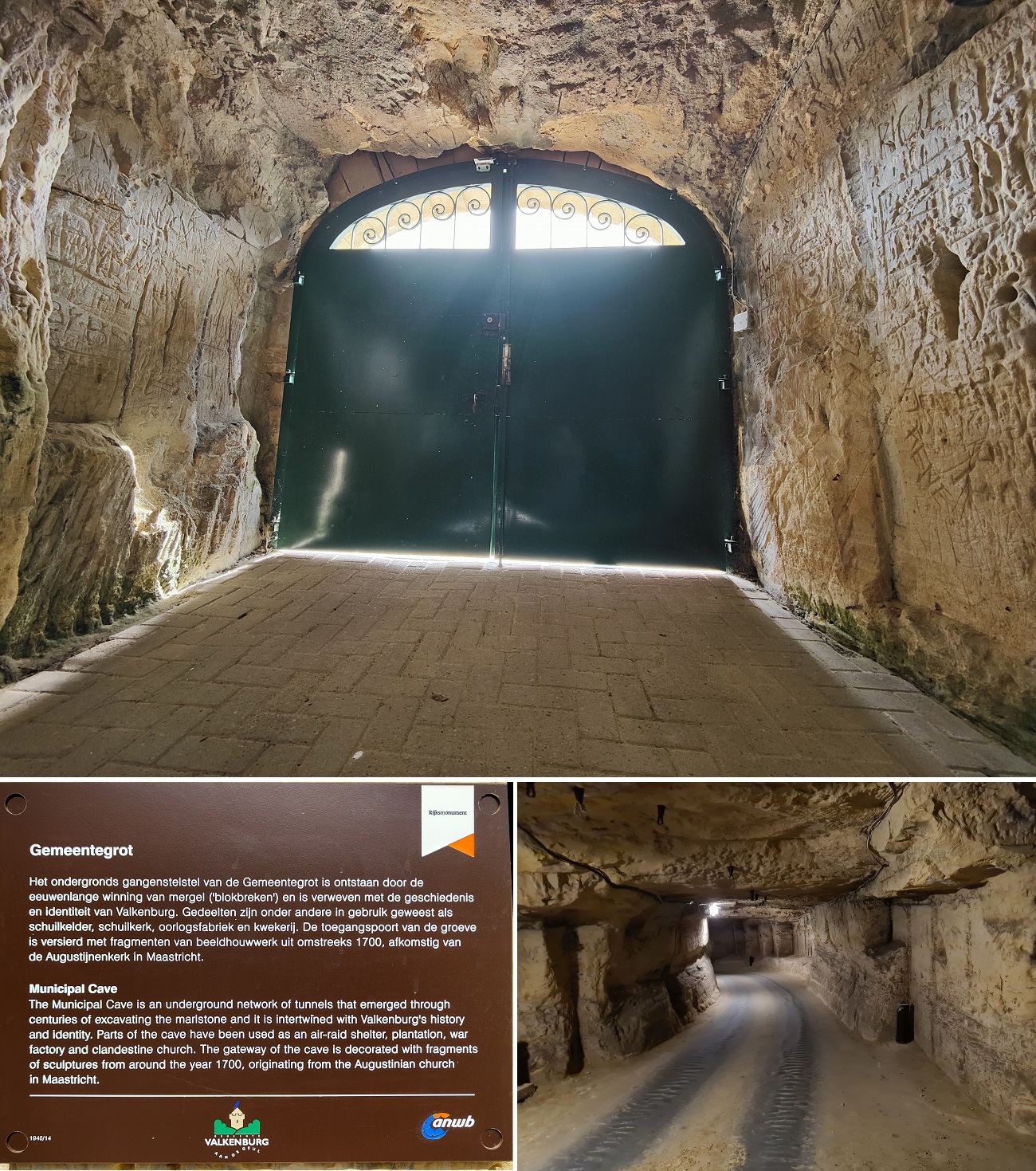 John takes us with him in mind, back to 1938. “Storm and rain ravaged the second half of the cycling world championships. After an extremely tough battle over 270 kilometers, in which 28 riders of the 36 who started, the Flemish Marcel Kint finishes first on top of the Cauberg. In honor of his victory in the World Championship on the road, he signed a memorial wall. The beginning of this unique underground cycling gallery in Valkenburg. ”

“The 1938 World Cup in Valkenburg was the last World Cup before the Second World War,” continues John. “During the war, the German occupier used the quarry, among other things for the storage of weapons. The Germans built walls in the cave. As a result, the original charcoal drawing by Marcel Kint disappeared behind a masonry wall. Later a replica was added to the cycling gallery – and signed again by Kint. ” 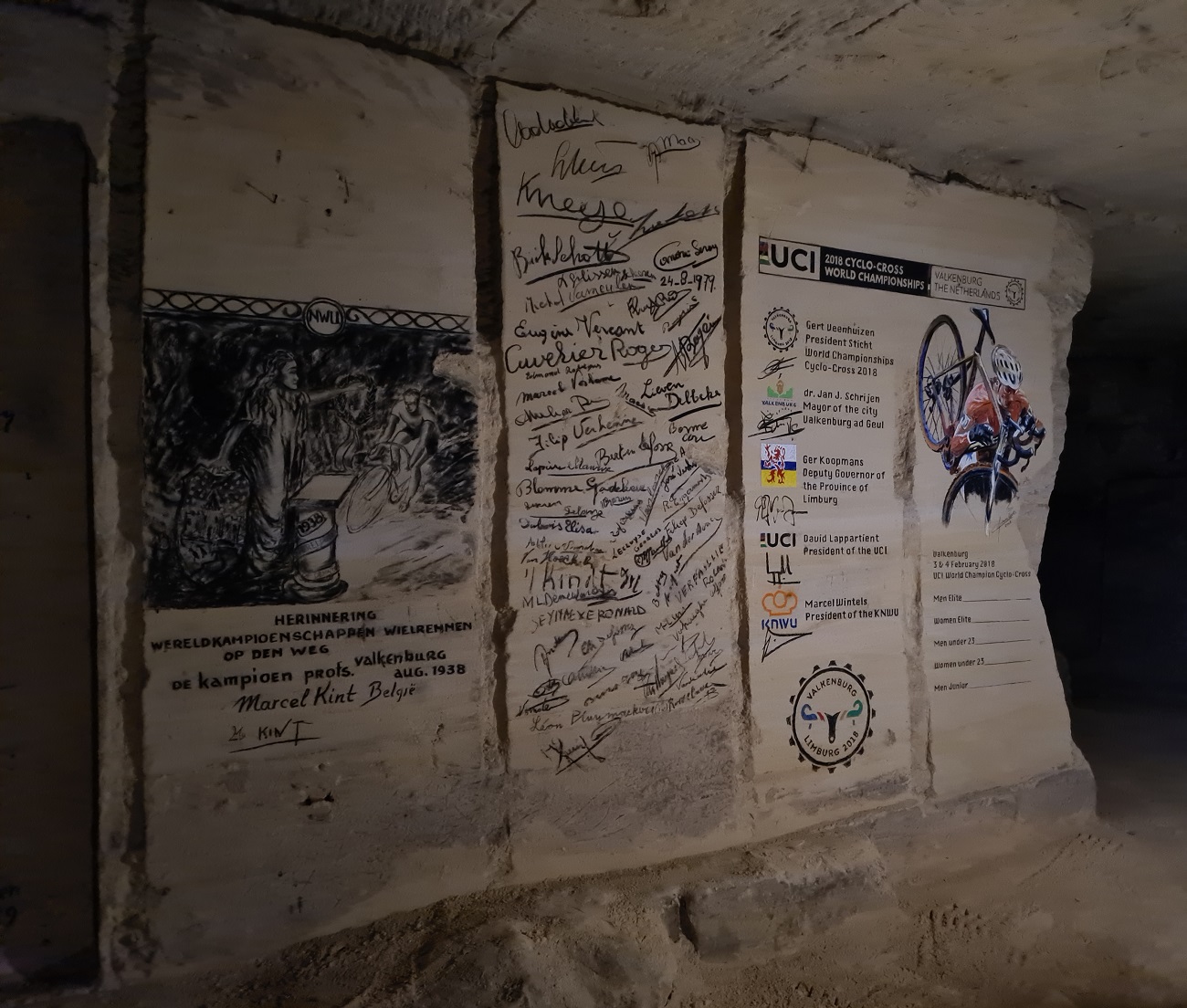 We stop 100 meters away at a huge airlock. John says that in 1979 an atomic shelter was set up in the Municipal Cave, since the layers are tens of meters thick
marl would provide good protection against the pressure wave and radioactive radiation that occur during an atomic attack. To get to the bunker, two airlocks have to be passed. The shelter can accommodate up to 15,000 people and can function completely on its own. There is a ventilation and climate system, drinking water, waste water and cooling water facilities, 8,000 beds, 180 toilets and 16 shower rooms. The cellar is still completely intact and can be visited during one of the guided tours that are offered. 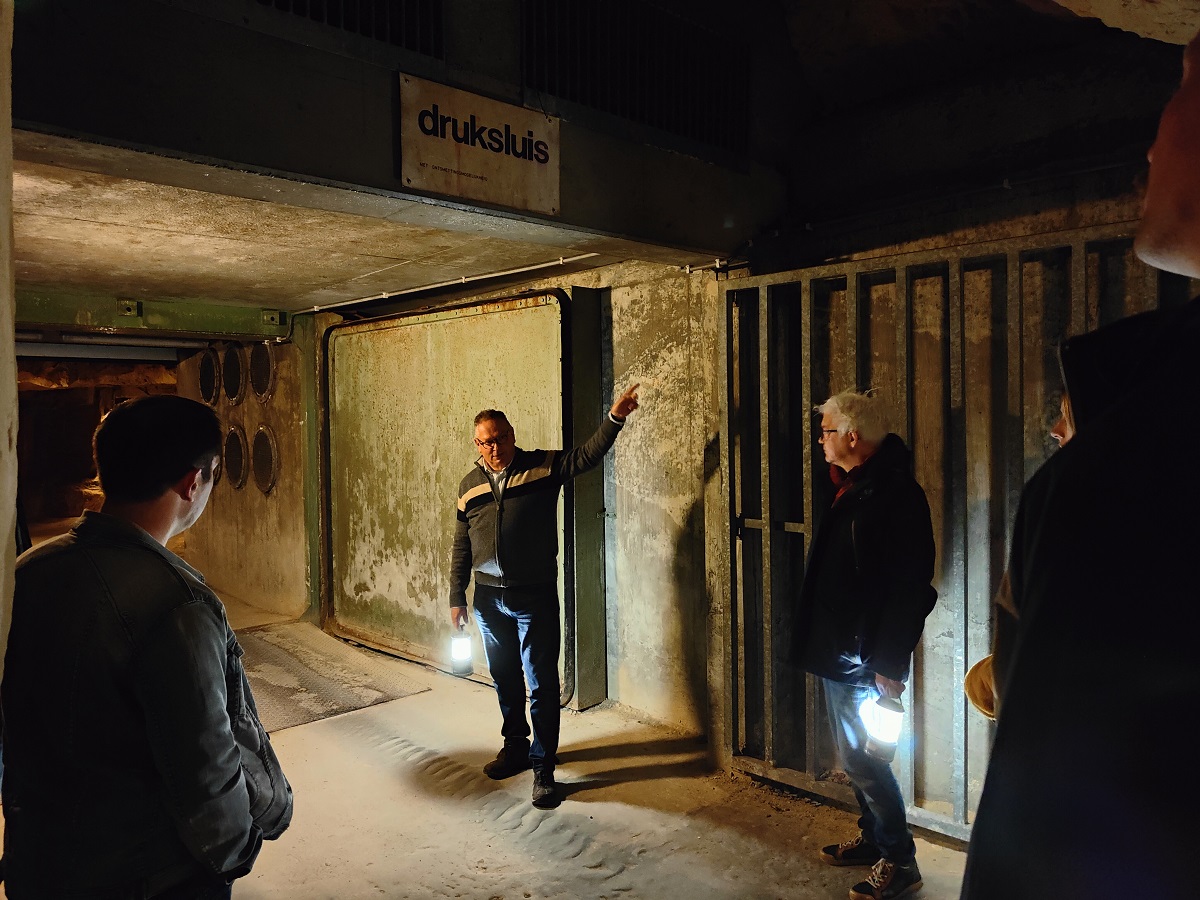 World Cycling Championships of 1948 in Valkenburg

“After the liberation of the Netherlands, people tried to resume daily life. Major sporting events were also put back on the calendar. During the war years, the Olympic Games, the Tour de France and several world championships had been canceled, but at the end of 1945 the organizing committees started to set everything up again. For example, the Dutch cycling association submitted a request to the UCI to be allowed to organize the cycling world championships. A request that was honored fairly quickly. In 1948 Valkenburg received the international cycling world. ”

Again, a Flemish Briek Schotte, 10 years after Marcel Kint’s victory, signed for the win. Briek Schotte himself was allowed to place his signature on the charcoal drawing in honor of his victory at the World Cycling Championships on the road in 1948. He told the journalists present that his success did not come completely out of the blue. The Fleming had driven to Valkenburg a number of times to explore the circuit. In addition, he had informed his fellow countryman Marcel Kint, who had become world champion on the same course in 1938.

But his real secret weapon? It was that weekend fair in Waregem and father Schotte had baked raisin bread himself. His son had received six cuts from them to Valkenburg. In his own words, he won the rainbow jersey. 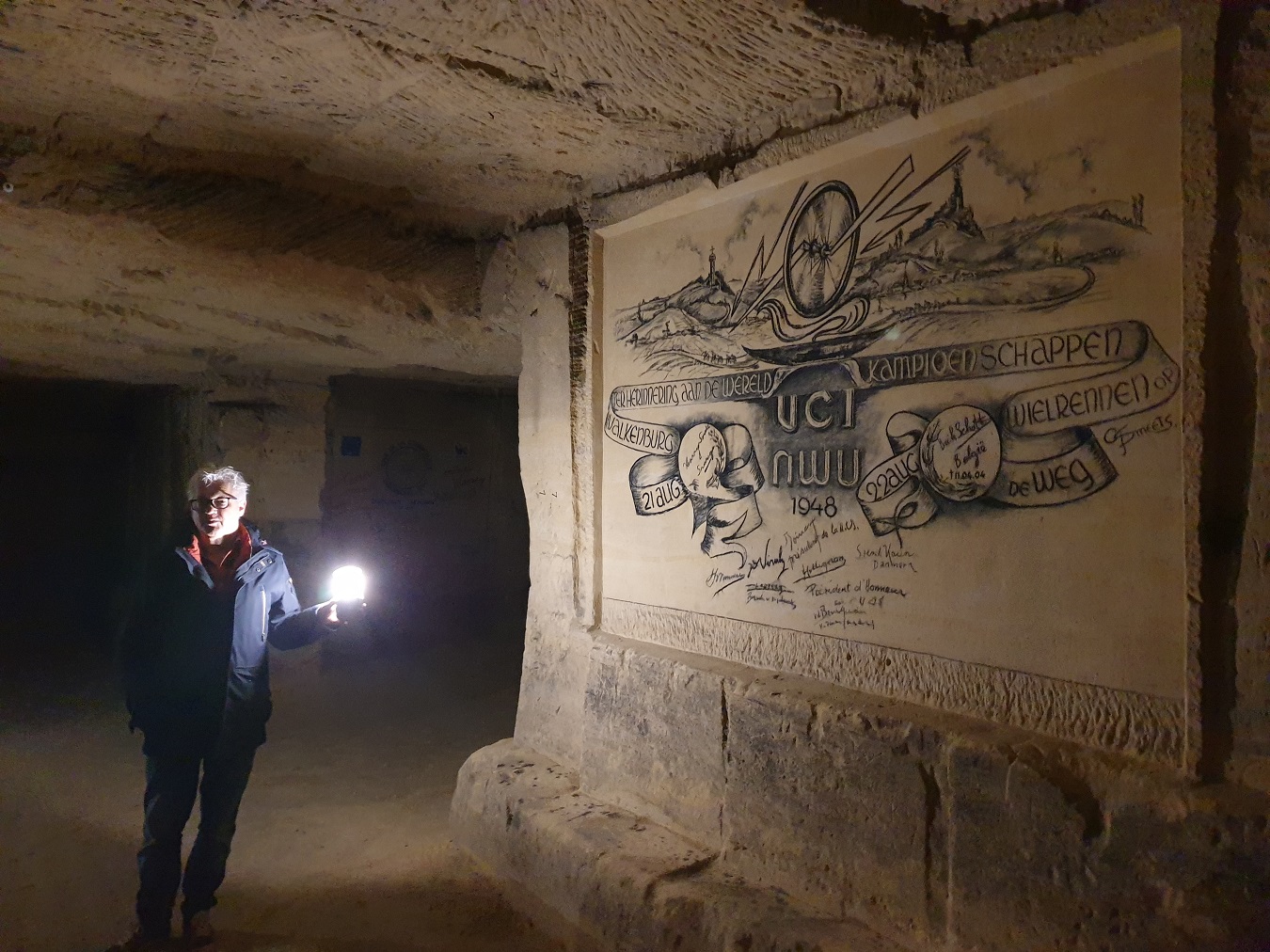 A charcoal drawing in honor of the 1948 World Cycling Championships in Valkenburg.

That a mention in the hall of honor means a lot, can be read in the book ‘History World Championships Cycling Limburg through the lens’ by Tonny Strouken. The Swede Harry Snell became world amateur champion in 1948. When he visited Valkenburg again in 1979, he learned that all world champions have been immortalized in the cycling gallery. When he saw his own name, he broke down in tears.

A little further we stop at one of the most recent murals, that of Leo van Vliet. With this mural drawing, the race director of the Amstel Gold Race is thanked for his many years of dedication to putting Valkenburg aan de Geul on the map as the cycling community of the Netherlands. A square has also been named after Leo van Vliet on top of the Cauberg in Landal’s castle domain.

Leo van Vliet, race director of the Amstel Gold Race, recently got his own mural in the Municipal Cave of Valkenburg.

Wonderful anecdotes about the cycling history of Valkenburg

During the tour of the Municipal Cave Harry and John tell one wonderful anecdote after another. Their enthusiasm for Valkenburg, cycling and the Municipal Cave radiates from it. Perhaps the best story is about the then cycling federation coach Leo van Vliet. He will take his Dutch World Cup selection into the Municipal Cave on the eve of the World Cup in 2012. A separate marl plaque is signed in the context of team building. Lars Boom, Robert Gesink, Niki Terpstra Karsten Kroon, Laurens ten Dam and Bauke Mollema, among others, sign the mural. Then the sign was ‘already hung’ in the hall of fame, after all, guaranteed success with such a top team? Unfortunately, the next day there was no success for the Netherlands during the World Cup. And when they later visited the gallery, it turned out that the tile had fallen off the wall. Is this a coincidence or is there more to it? The tile has fallen into pieces, but has been preserved. For example, the 2012 Dutch World Cup selection still has a place in the cycling gallery. 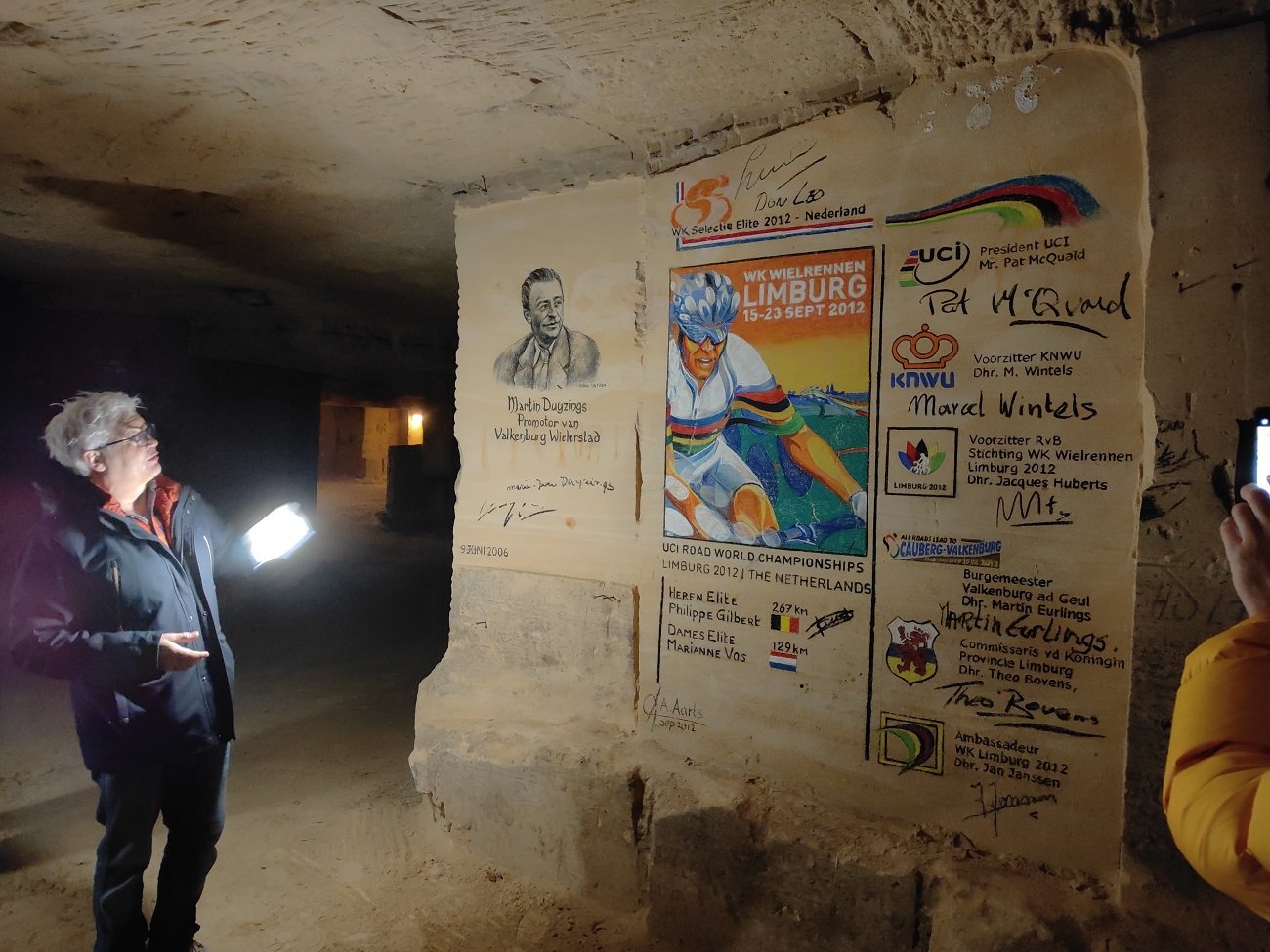 In 2012 Marianne Vos won gold in the women for the Netherlands. The World Cup cycling poster is colorfully executed in pastel chalk by Antoine Aarts. 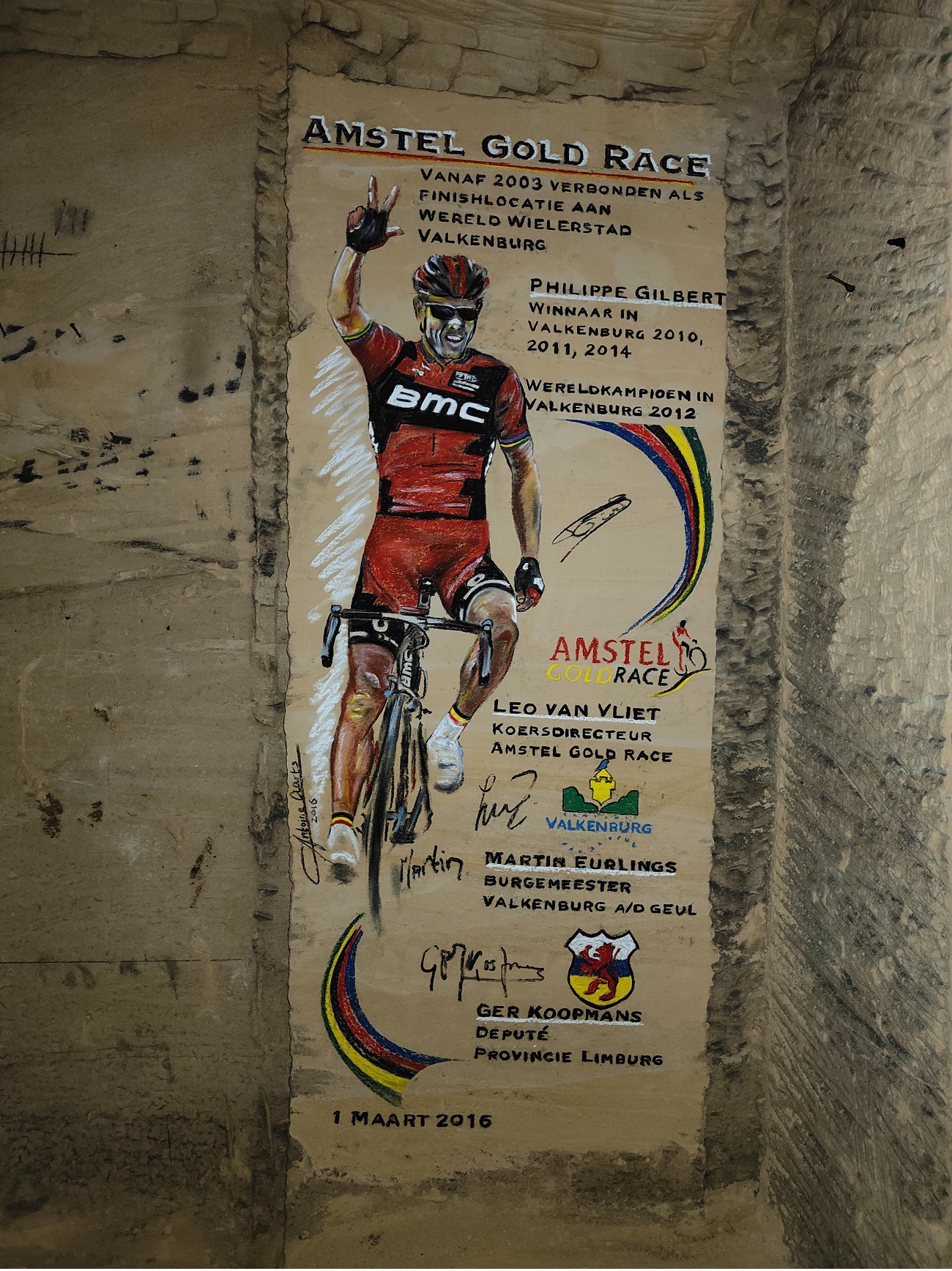 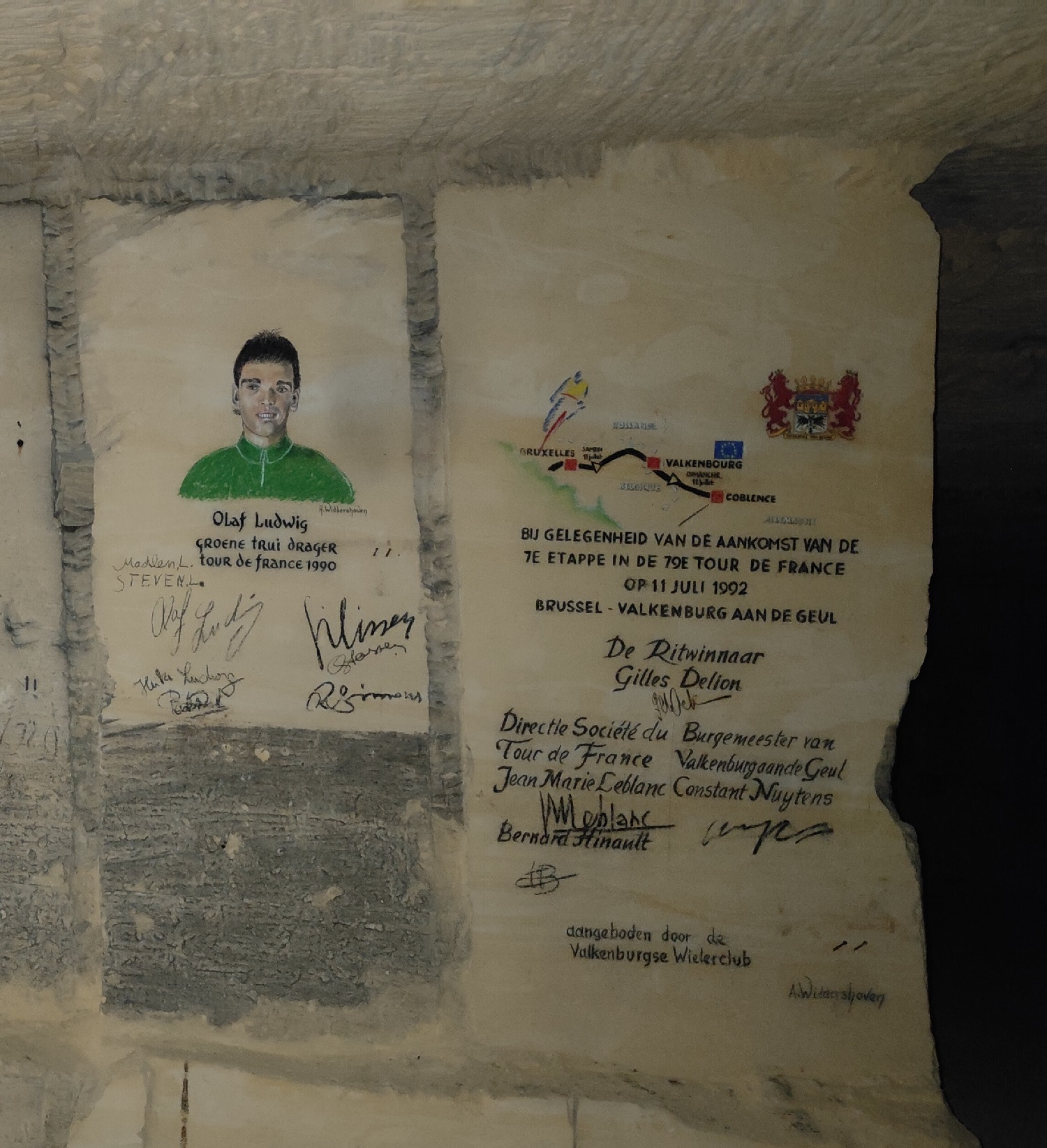 The start and finish of a stage of the Tour de France in 1992 has also been given a wall. 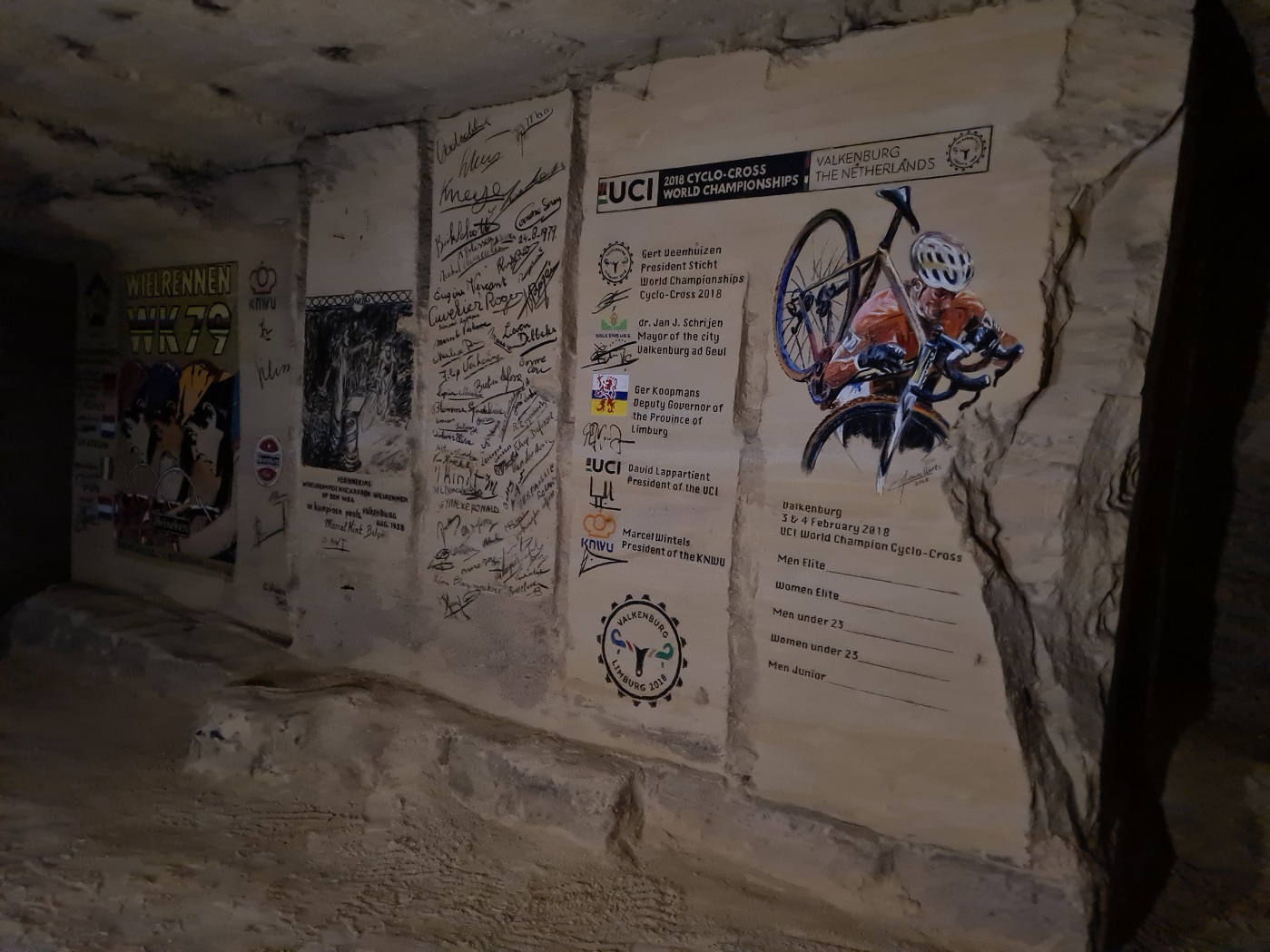 Would you like to visit the caves and the cycling gallery yourself?

The Municipal Cave is operated by the municipality of Valkenburg aan de Geul and is open to tourists. There are regular guided tours. The entrance to the oldest marl cave in the Netherlands is located at the foot of the Cauberg. During your tour you will pass murals, plaques, sculptures and air raid shelters from the Cold War period. If you want to visit the cycling gallery in the centuries-old marl quarry of Valkenburg yourself, check the website cave-experience.nl.

If you want to spend the night in Valkenburg, take a look at Castle domain De Cauberg, a luxury holiday park at the top of the Cauberg. Ideally located for a weekend or (mid) week cycling and walking in the beautiful Limburg landscape. And from the park you can walk to the entrance of the cycling gallery of Valkenburg in 10 minutes.

Here you can read more information about cycling in South Limburg and about Valkenburg as the touristic heart of Limburg.

Have fun and be sure to visit the cycling gallery of Valkenburg!

Previous articleSeychelles is open to tourism, but imposes new restrictions for some countries
Next articleOPPO – Out of This World Colors – behind the scenes