In the middle of the corona period, after a number of years of preparation, a new and unique museum opened on the NDSM site in Amsterdam North. The STRAAT Museum with a unique collection of Street Art.

Walls full, high and colorful. Street art has become an indispensable part of today’s street scene. In roughly fifty years it has grown from illegal underground activity into a legitimate art form. In fact, it is one of the greatest art movements of our time. That is why there is now STRAAT, the museum for graffiti and street art.

Street Art is not the same as graffiti. Graffiti is to place the decorative name tags, preferably in challenging places. This is about the identity of the makers and the kick of setting. Street Art is all about the originality and quality of the images. And for the message behind it. 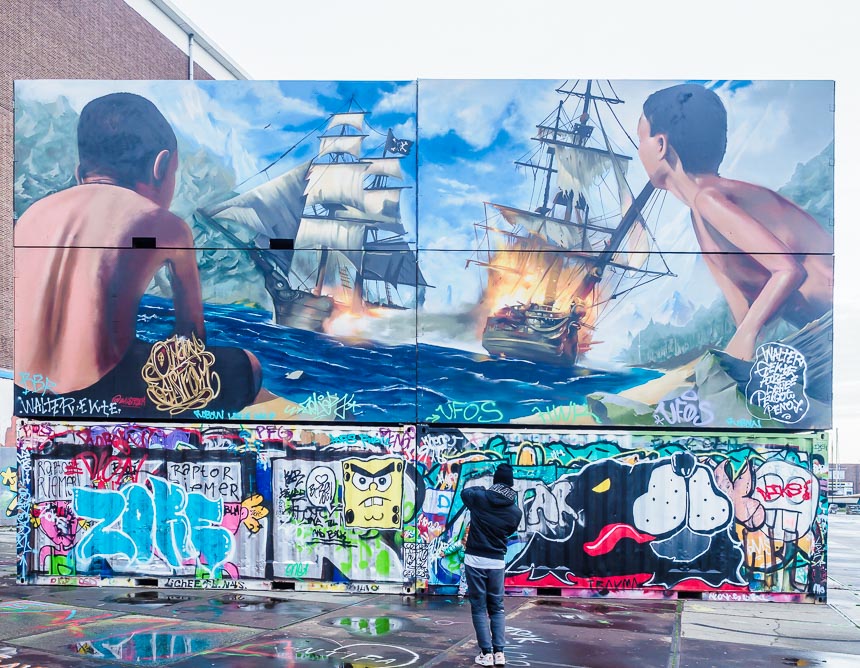 Graffiti originated in New York in the 1960s. It started with teenagers leaving their name and street number in and on trains. It grew into the multicolored aerosolized paintings that could be found in every city, illegal or not. 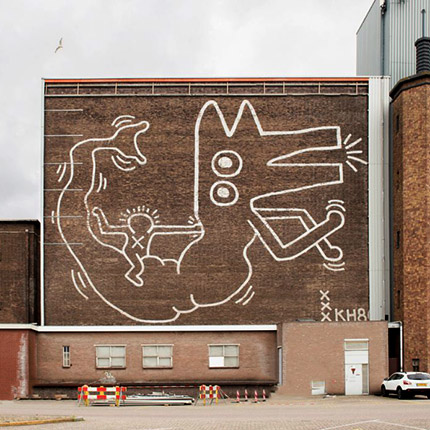 Street Art grew out of this movement. In the 1970s, texts and images were painted on walls with mainly messages using templates. The images became more artistic and people became aware that there was a new artistic trend. In the 1980s, Pop Art emerged Keith Haring, who had started drawing chalk drawings on blank billboards in the New York subway. In Amsterdam, a mural by his hand can be seen on the Food Center site on the Jan van Galenstraat. This is not publicly accessible. But from the Willem de Zwijgerlaan, the artwork can be seen fairly well.

The Political Message of Street Art

The political message of street art is often prominent, especially in countries with a culture of revolution, such as Nicaragua and Cuba. But the roots of this can be traced back further. A century ago, the Mexican artist Diego Riviera was inspired by the political ideals of the Mexican Revolution (1914-1915) and the Russian Revolution (1917). He strove to create art that reflected the life of the working class and that of the indigenous Mexican people. Large murals were created with the help of economic support from the Mexican government as part of a nationalist project. And in our time there is, of course, Banksy, who operates in a more guerrilla way. Today, Street Art is arguably the most popular and influential art form in New York, Paris, Los Angeles, Berlin, Tokyo, London and Amsterdam. In any case, the most visible.

The museum is located on the NDSM site. A location that perfectly matches what is being exhibited. Rugged, urban, messy and industrial. A large hall, itself also framed by murals and with an enormous portrait of Anne Frank as a visual focus on the facade. Outside you will find a collection of graffiti and Street Art, you can sometimes see artists at work or participate yourself. 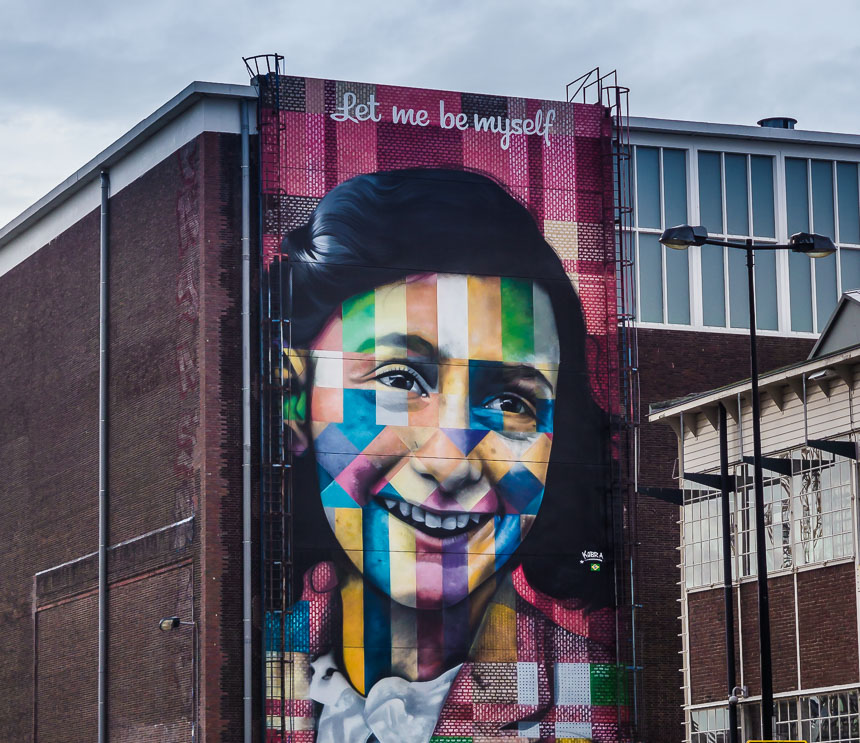 Anne Frank on the facade of Street Amsterdam 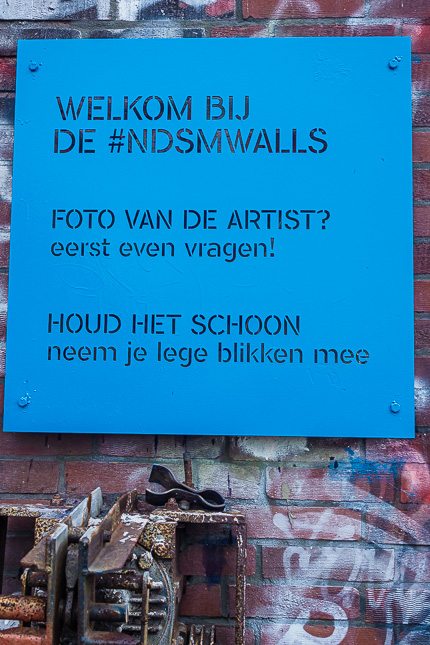 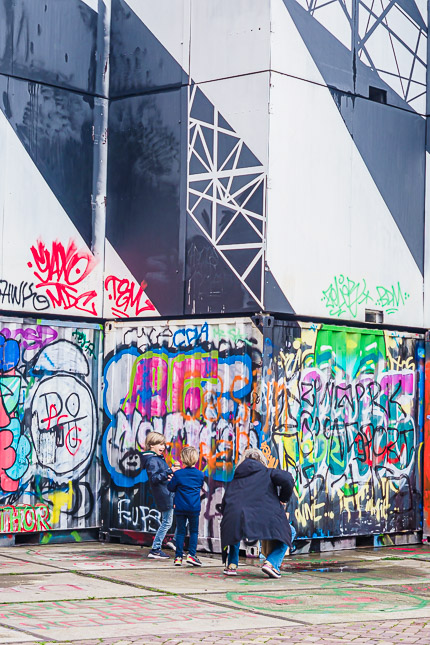 Inside, the large open space with its concrete, brick, steel and glass has the elements of an urban environment, which has been cleverly emphasized by the designers through a layout that is designed as streets, squares and intersections. And the size and height provide space for the often substantial works.

Wandering through the streets and squares you will fall from one surprise to the next. By the imagination or the colors or the precision or the expressiveness. Or through everything at once. 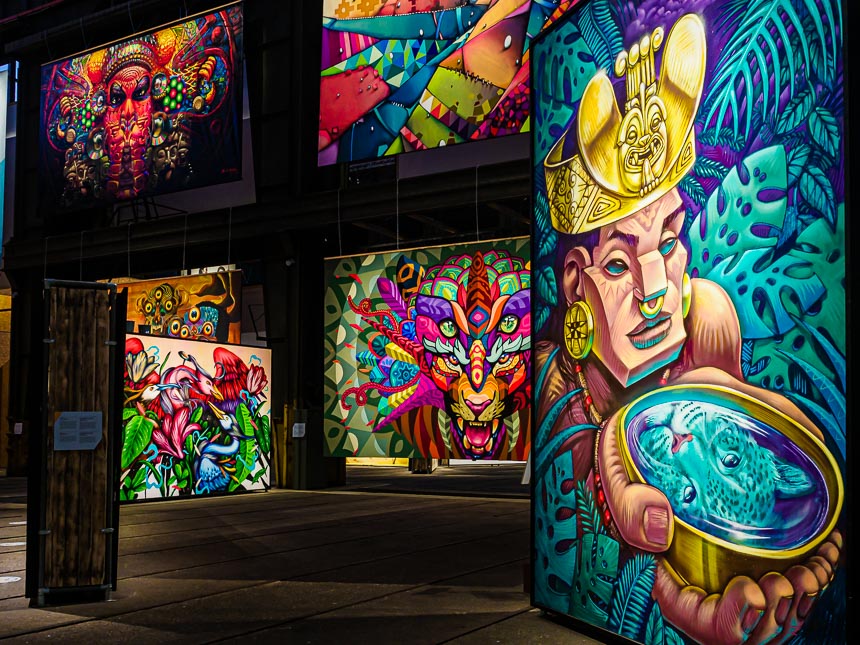 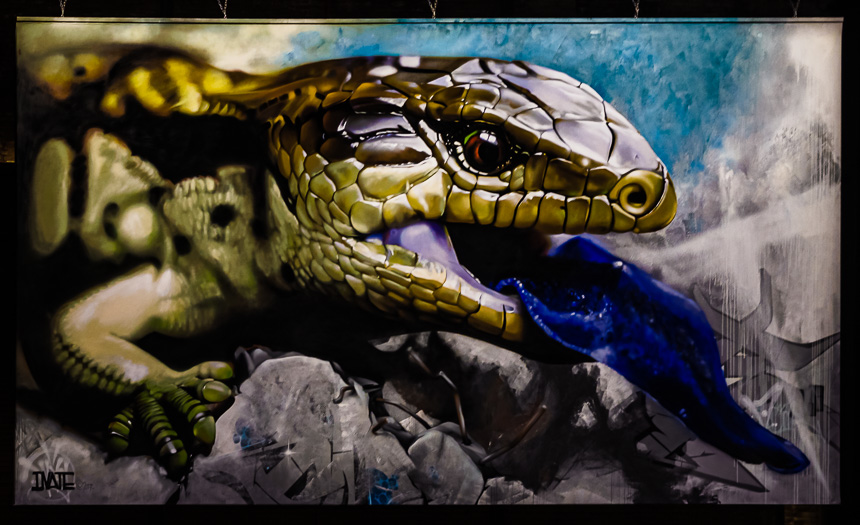 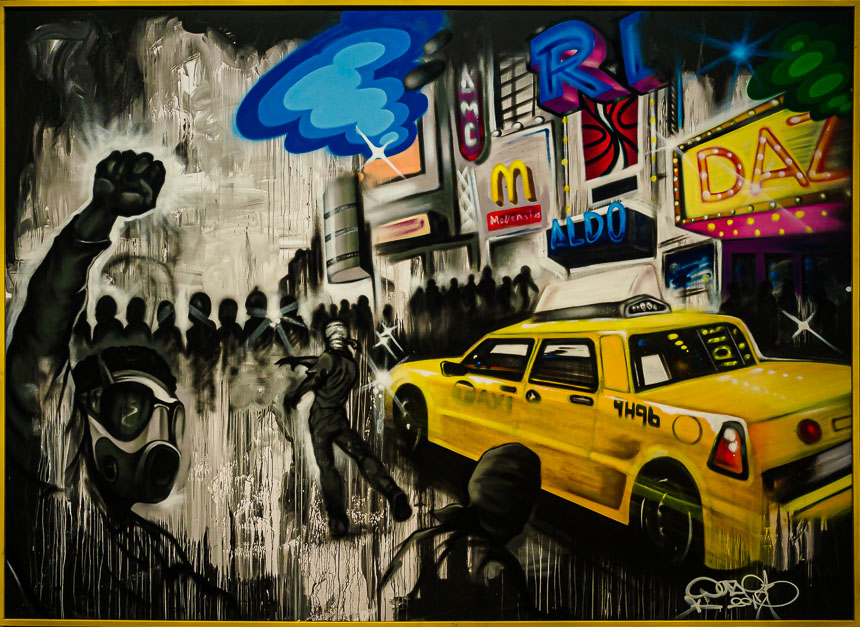 Most works would not really come into their own on the white walls of the urban or the dark walls of the Rijksmuseum. Here, the patina of the factory walls, the high windows through which beautiful light falls through at sunset and the furnishings enhance the strength of the works. 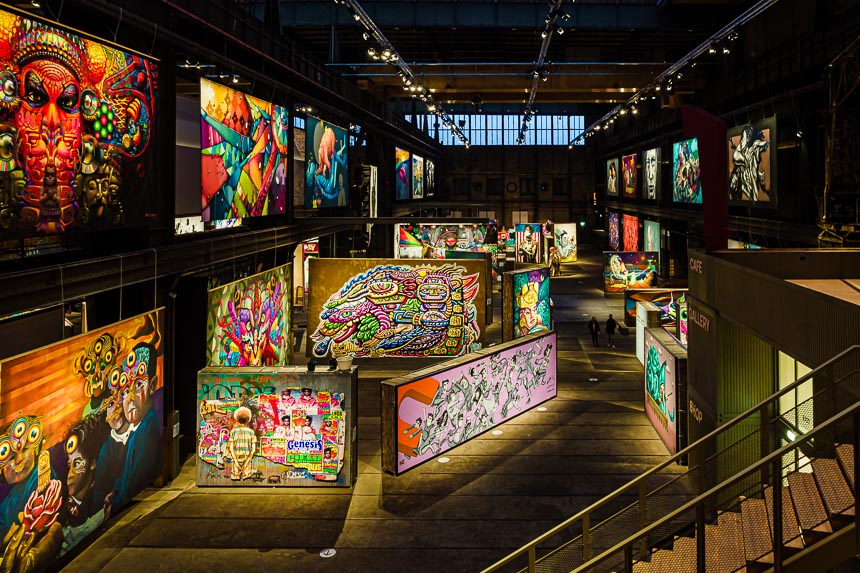 Overview of the hall 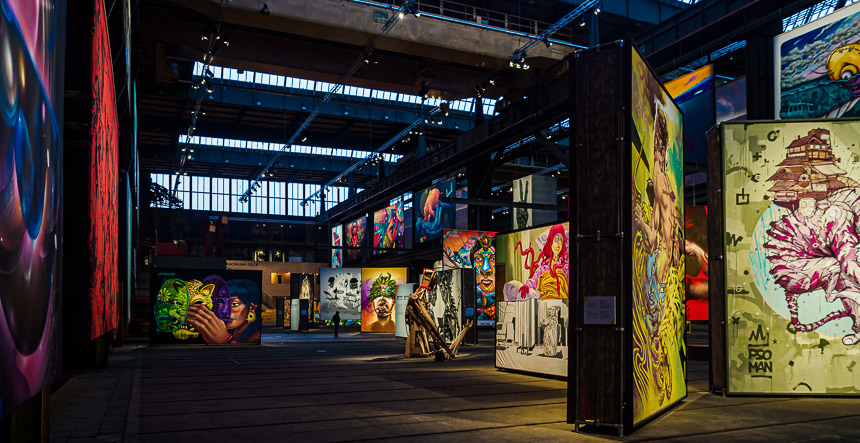 Street art is international and urban, from Amsterdam to New York, from Tokyo to São Paulo. These and many other places are represented. But as if to indicate how international and connected the works are, the division is not by place, but by theme. Aesthetic, personal, connected, aware, empathetic. 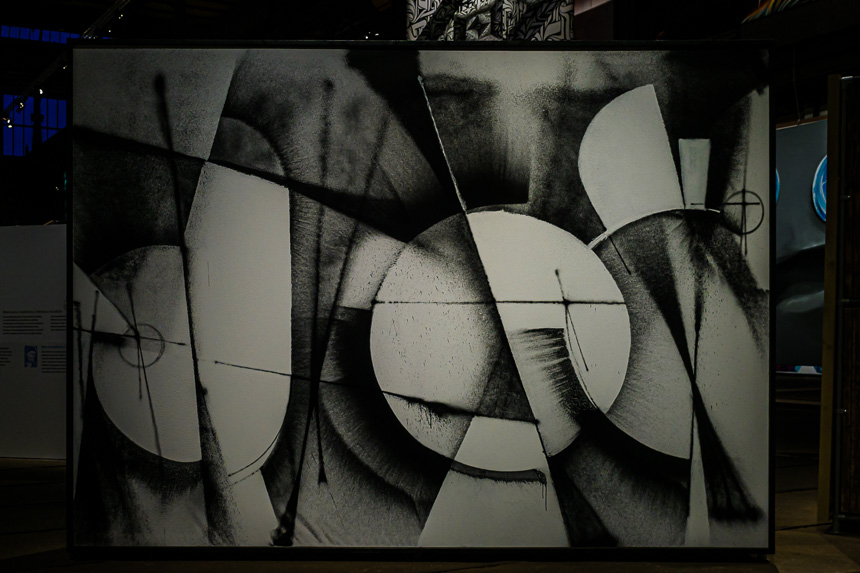 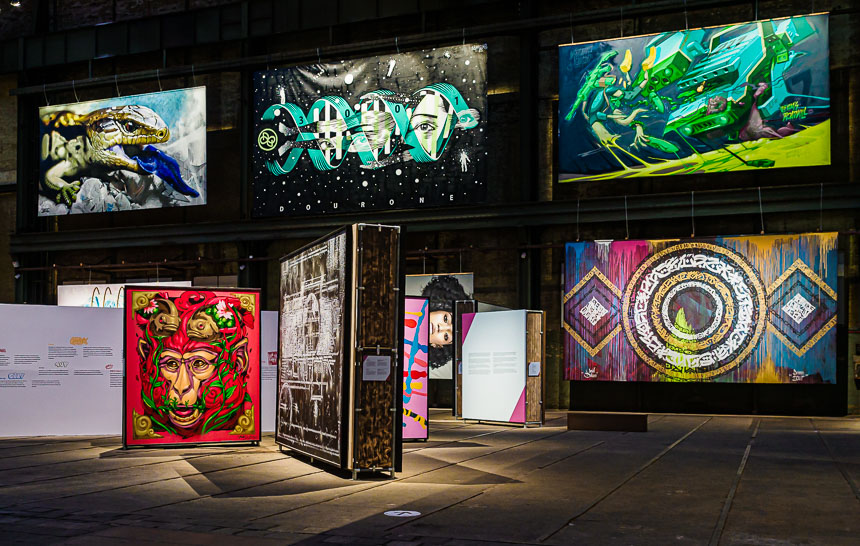 Works from the personal category 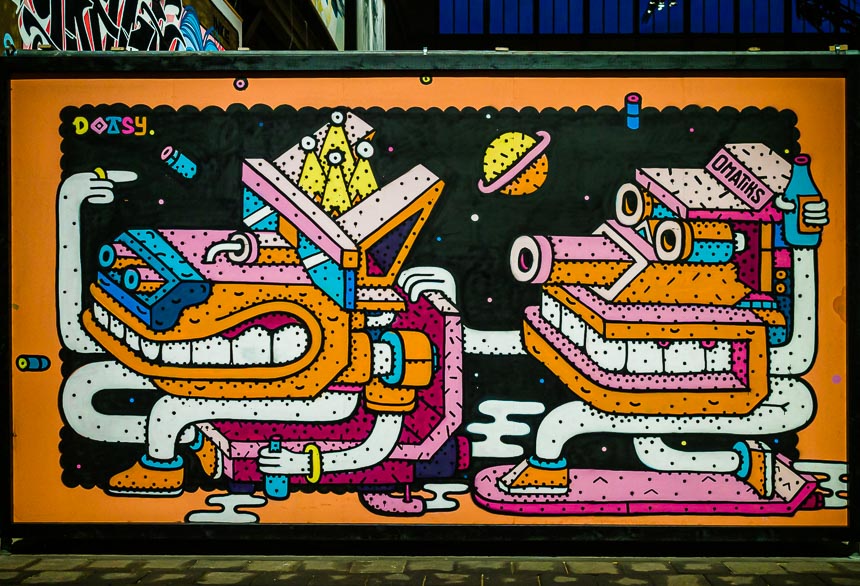 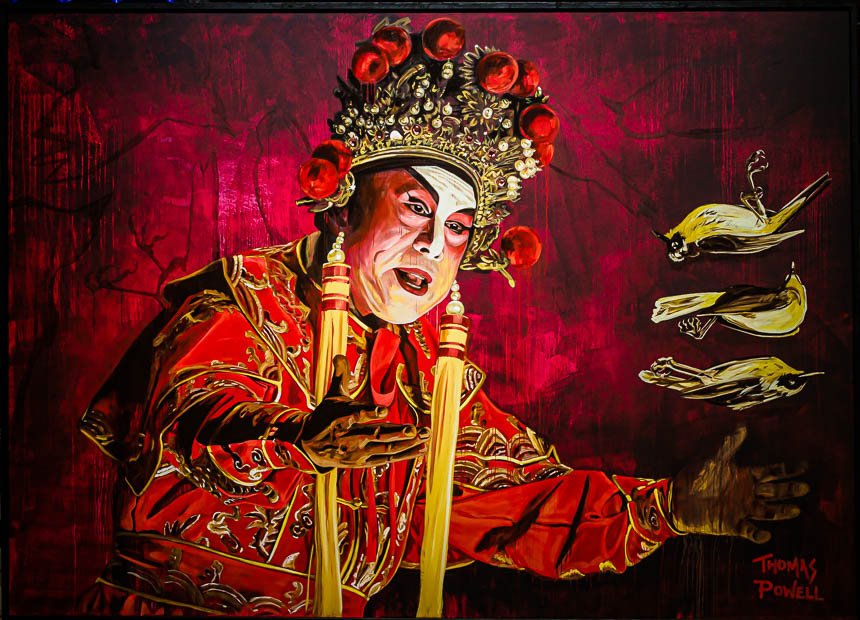 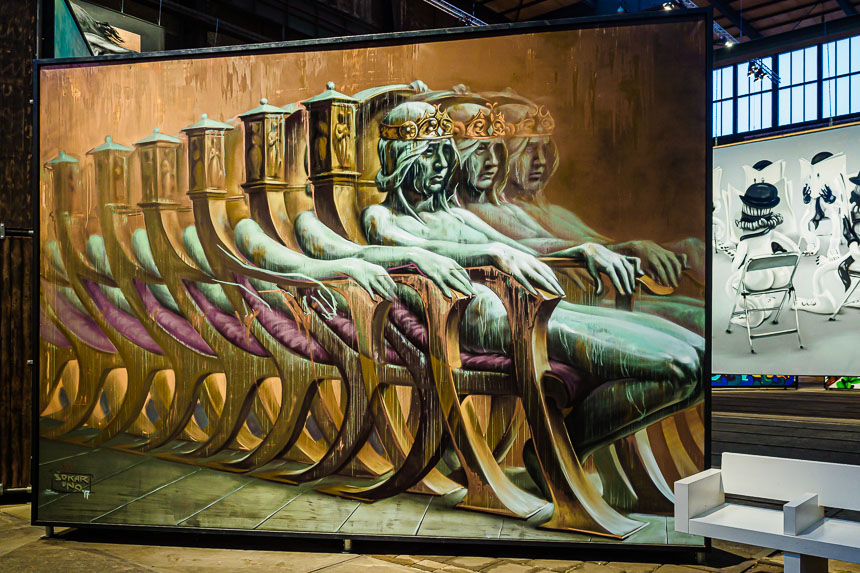 In addition to the works, the hall also contains an extensive explanation of the history and the present of Street Art. A lot of reading, but it pays to delve into this. But don’t forget to take the time to wander. 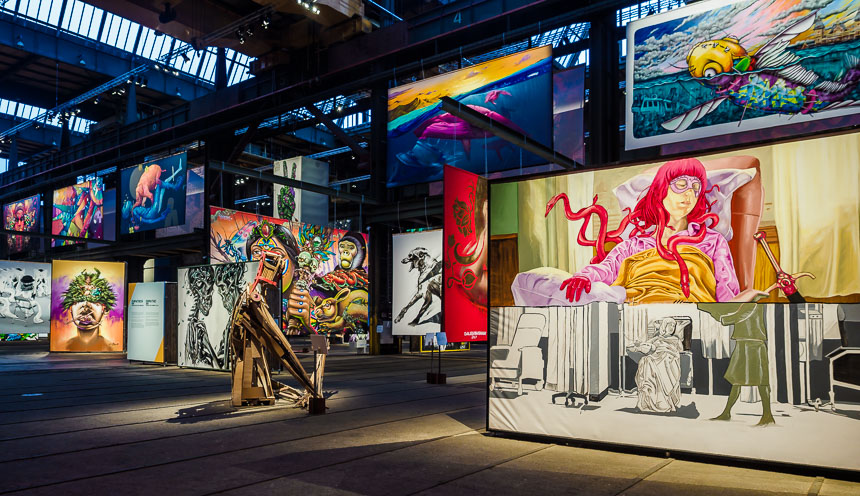 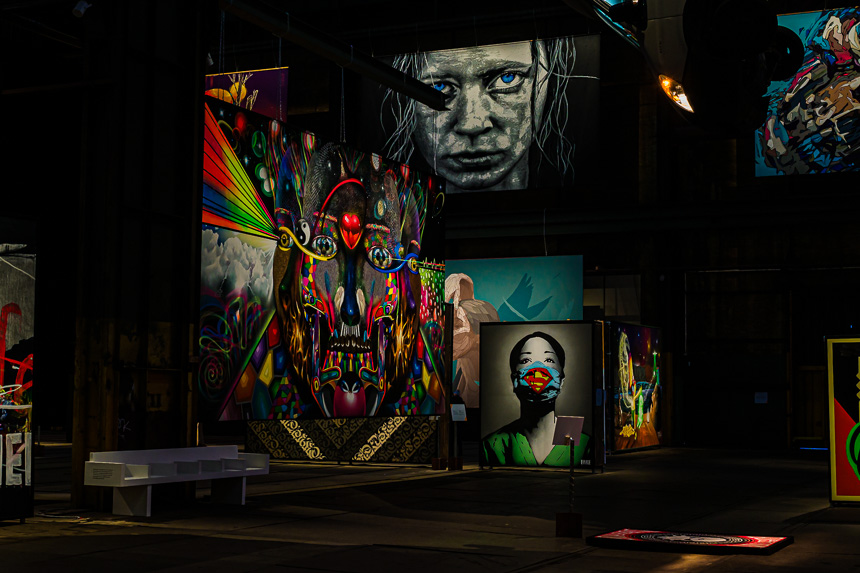