There is a new train ticket for those who have difficulty choosing between the northern cities in England. The North of England City Experience allows you to combine five fantastic cities in one trip. This way you can explore up to five cities in one with one inexpensive rail pass and you don’t have to choose at all!

Traveling through England by train has all its charms anyway. But in the north of England, train travel is also extremely efficient. There, the railway very conveniently connects the cities of Newcastle, Liverpool, Manchester, Leeds and Hull with each other.

On the outward and return journey, take the ferry from Europoort, Zeebrugge or IJmuiden to Hull or Newcastle. Or you fly to Liverpool, Manchester or Leeds. Furthermore, you travel by train through England from city to city. In this way, a multi-city trip or city holiday comes within reach. The distances between the cities are shorter than you think, and with a Rover ticket from the North of England City Experience you can hop on and off the next train. This is the perfect solution for your city trip dilemma. 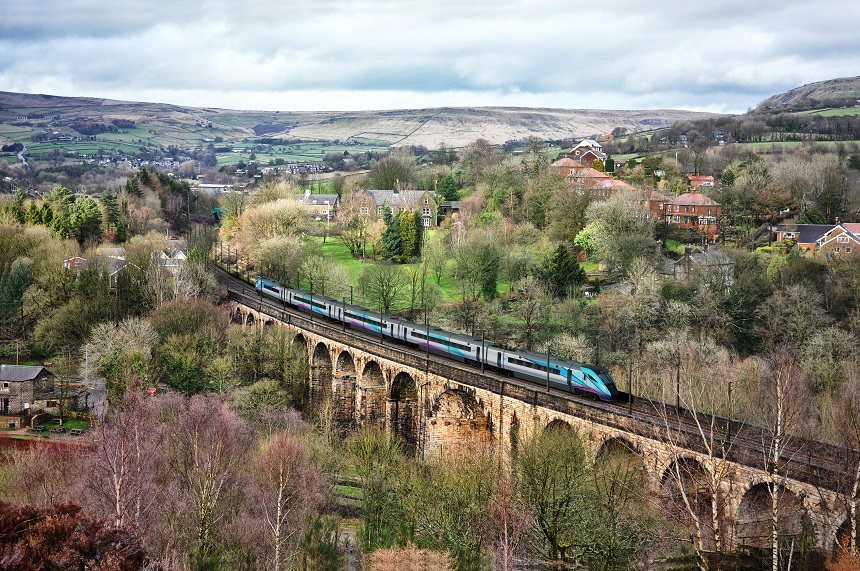 Get to know the marine life in Hull, wander the arty arcades of Leeds, take a street art tour or step into Manchester’s Peaky Blinders scene. Follow the musical tracks of The Beatles in Liverpool or feel small along the Angel of North at NewcastleGateshead. Five very different cities, and five completely different experiences. Partly due to the relaxed nature of the trains, this journey is incredibly varied!

With the ‘North of England City Experience’ train ticket you can travel frequently with the Transpennine Express between the northern English cities. Travel to the heart of each city at your own pace with a convenient train ticket that allows you to travel between all of them. With a fixed price of £ 99, this ticket is cheaper than all single train tickets. Moreover, traveling by train through England does not have to take a lot of time. The travel time between the cities is not so bad. Within an hour you get off in the center of the next town. From Newcastle, which is a bit more to the north than the other cities, it is slightly longer. 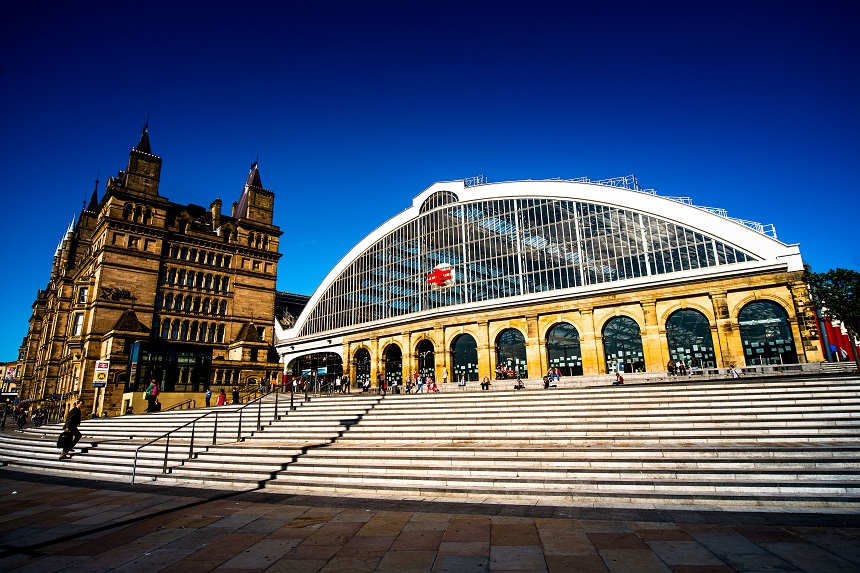 The North of England City Experience is a great travel concept that allows you to visit multiple cities in Northern England by train: Hull, Leeds, Manchester, Liverpool and Newcastle. During the train journey you use the Rover ticket. With the Rail Rover Ticket you can travel for four days on the TransPennine Express within a consecutive period of eight days.

On each day of use, you can use the ticket as often as you want, after 9:30 am. You can start the adventure in any city and end it wherever you want. You decide which cities you want to visit and on which days you board the train. You can check in advance what time you will take the train and reserve a seat. This way you can be sure that you are comfortable. Prefer to watch it last minute? Then you just board the train when it suits you. So you can completely fill in your trip yourself! If you book your trip through House of Britain, the hotels have already been arranged for you. All you have to do yourself is get on the train and enjoy. 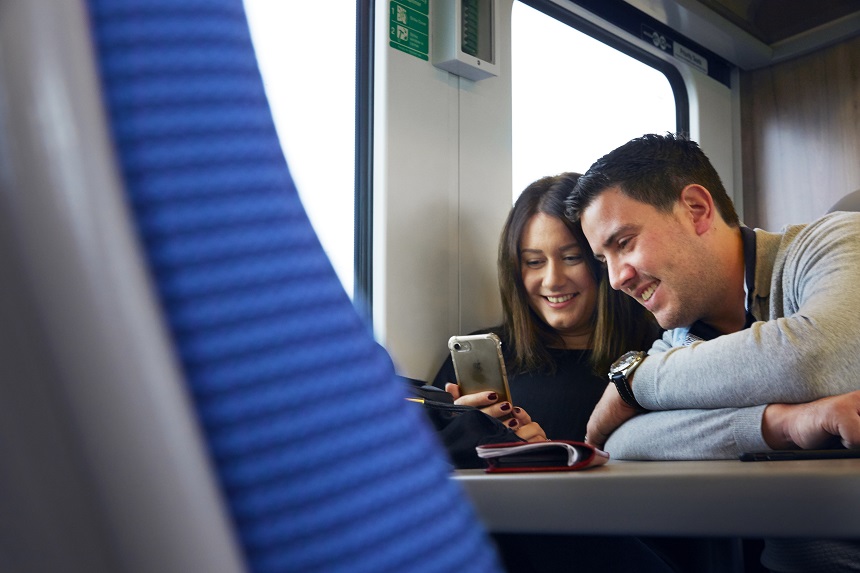 Get on the train and enjoy

Hull, Leeds, Manchester, Liverpool and NewcastleGateshead are five highly dynamic, post-industrial cities in the North of England that have grown big through traditional industry. Although the five places are old industrial cities, that does not mean that they are gray and boring. On the contrary, the region has undergone tremendous development in recent decades and today the cities are characterized by their daring cultural reconstruction. They have now been developed into hip cultural hotspots where there is something to experience for everyone.

Liverpool and Manchester were the first cities to start renovating their old center. The other major cities in Northern England followed a little later in their development. Clever use was made of the industrial appearance of the center. Old factory buildings were transformed into cultural hotspots, characteristic narrow streets with warehouses are now very popular visiting addresses for shopping and catering. Street art, afterwards bars, small boutiques and craft beer; it all finds its way in these delightful cities. Something that is only a huge advantage in the current hipster era. Through art, music, literature, theater, dance, architecture, cafes, restaurants, nightlife, festivals and events, these cities offer a special experience in a flourishing environment. 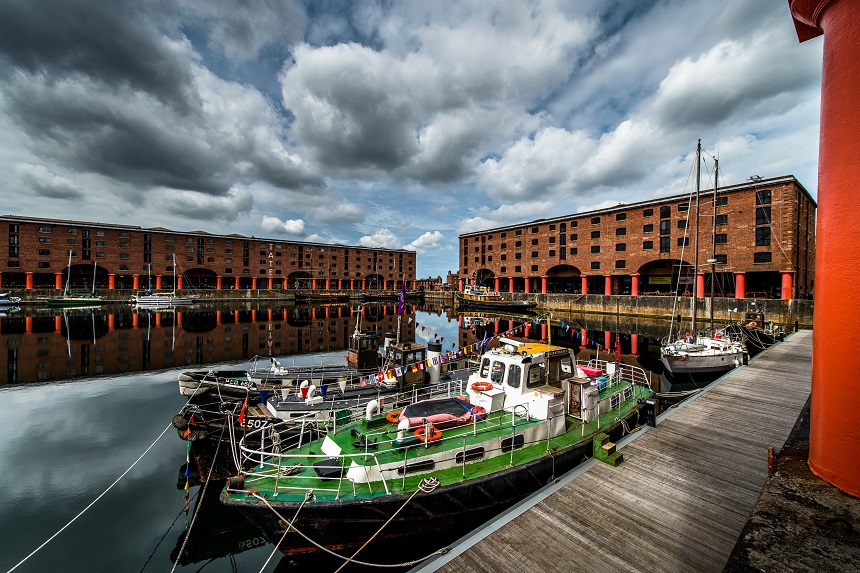 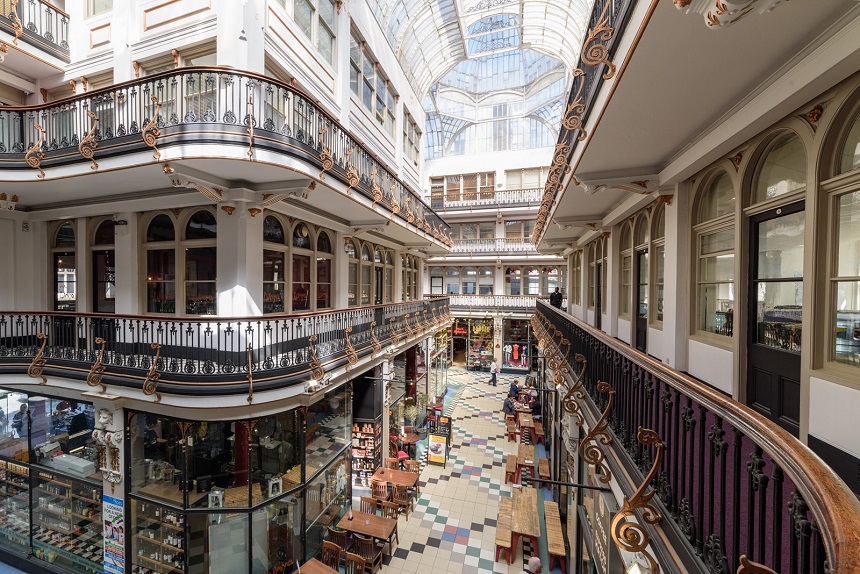 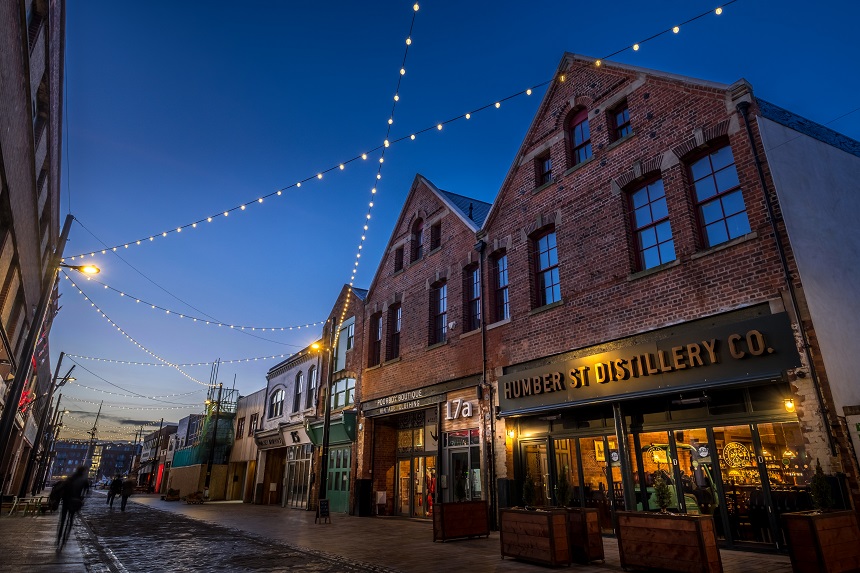 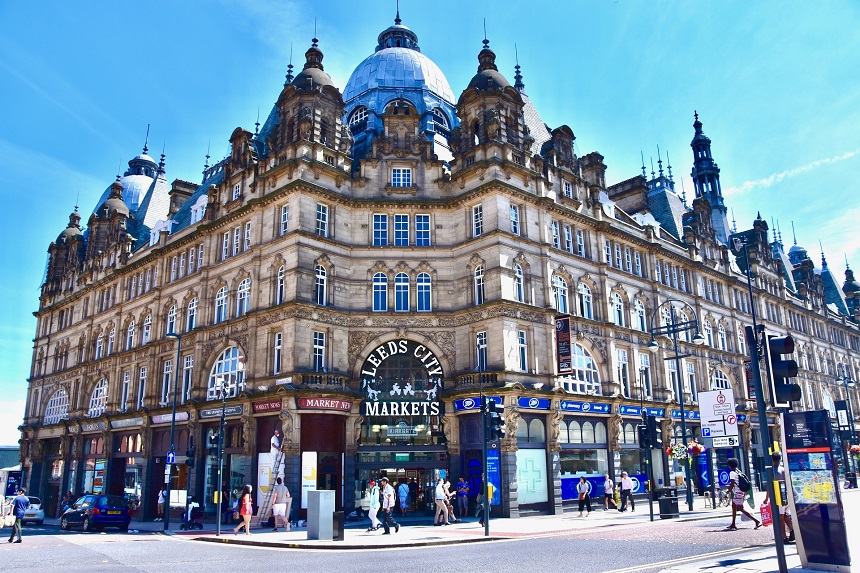 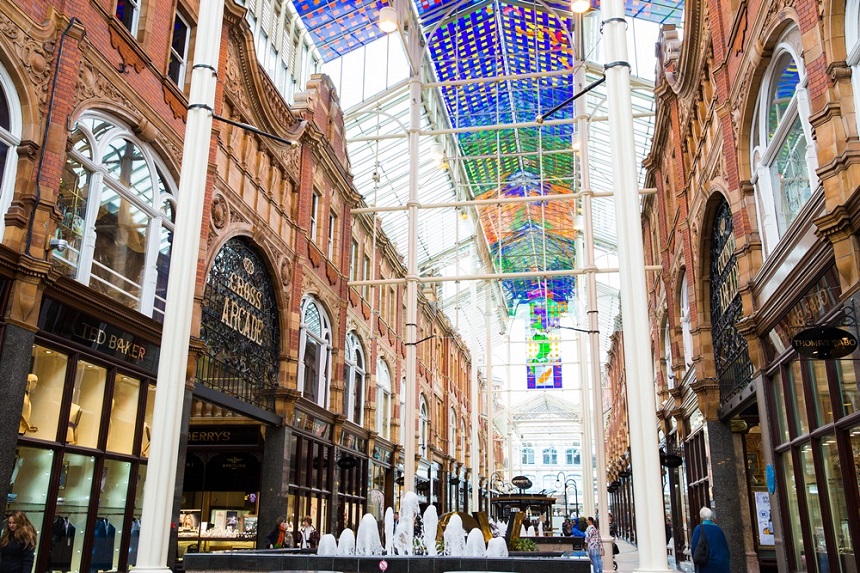 Five large cities in Northern England, each with a unique cultural character, its own personality, as it were. You can discover them all with one affordable rail pass: The North of England City Experience. So you no longer have to choose between the vibrant culture of NewcastleGateshead, the fantastic shopping in Leeds, the music scene in Liverpool, the museums of Hull or Manchester’s redeveloped quayside, ‘The Northern Powerhouse’. With the Rover ticket you can enjoy these and many more cultural highlights in these fantastic cities.

With a happy combination of a relaxed train journey and embellished heritage areas full of cultural enclaves, you can create your own cultural itinerary, right across the north of England. You can visit all five cities in one trip or maybe see two, three cities and return later to visit the others. This is how you create the ultimate Northern England city experience. 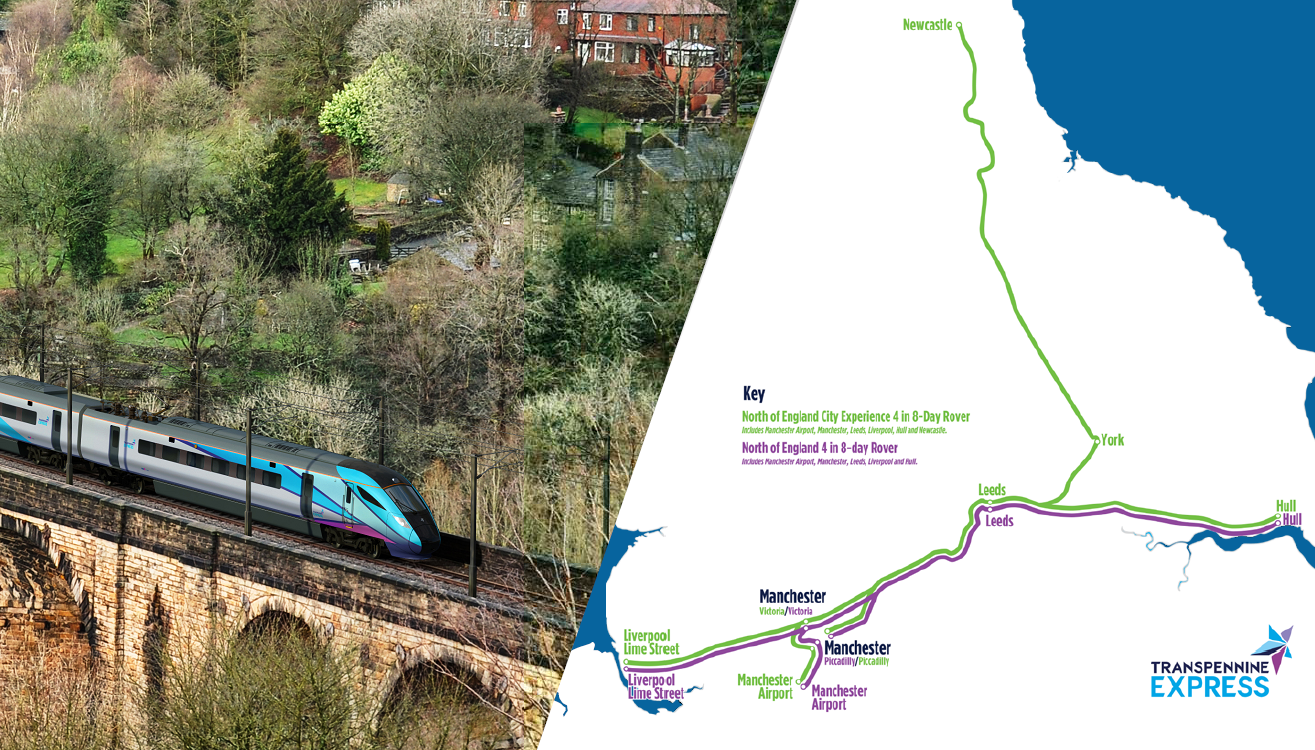 The possible routes with the North of England City Experience

By the way, have you noticed that you can also get off in York? This is not one of the five cities for which this ticket is intended, but you can get off there on the way to or from Newcastle to be enchanted by this beautiful city.

The trail traverses the rolling hills of the Pennines, often referred to as the ‘backbone’ of the British Island. It is the ridge from Central England to Northern England that runs across the island. From the train you can enjoy highland areas with heathland, interspersed with fertile valleys and various rivers. You can of course also plan your trip so that you have time to dive into nature.

Parts of the Pennines are included in National Parks, while other parts have been designated Area of ​​Outstanding Natural Beauty (AONB). From Leeds or Newcastle you are quickly in the Yorkshire Dales and the Northumberland National Park. From Manchester you are in the Peak District in no time. Travel by train to Glossop or Buxton, or the Hope Valley line towards Sheffield and alight in the beautiful Derwent, Hope or Edale Valley. You can of course also opt for a day tour, sports enthusiasts take the bike. Within an hour and a half you will be in the middle of the picturesque nature that is so characteristic of the Pennines. 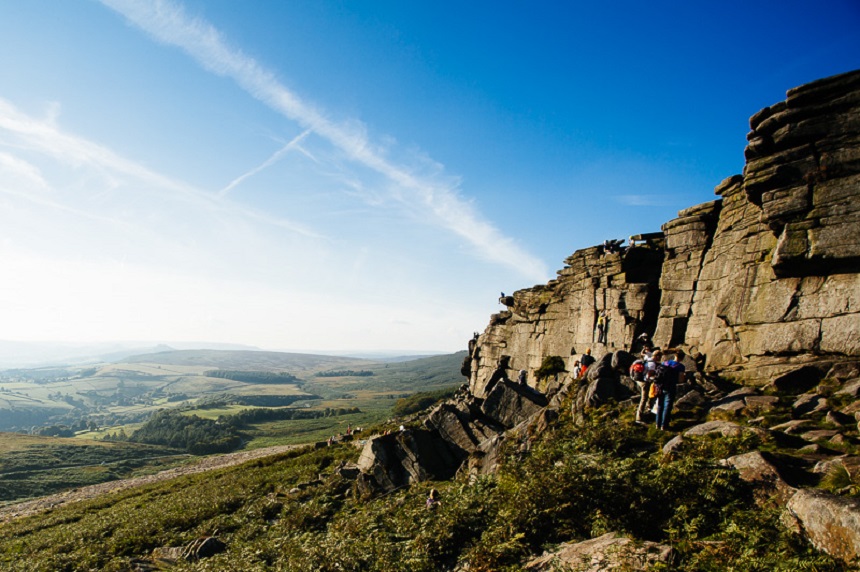 Stanage Edge in the Peak District (near Sheffield)

The North of England City Experience is for sale at TransPennine (train ticket only) and House of Britain (complete journey). The Dutch travel organization House of Britain has put together complete holidays around that rail pass that take even more work off your hands. look at the rail holidays in Northern England on this page.

We have seen the transformation of these diverse cities of Northern England before and enjoyed culture, heritage, history. Our experiences are described in the report: discover Northern England by rail with the Rover ticket.

For more inspiration: Love Great Britain made a nice promotional video of the North of England City Experience.

Thailand may launch its own cryptocurrency for visitors

4 Best travel insurance for the US with Covid coverage