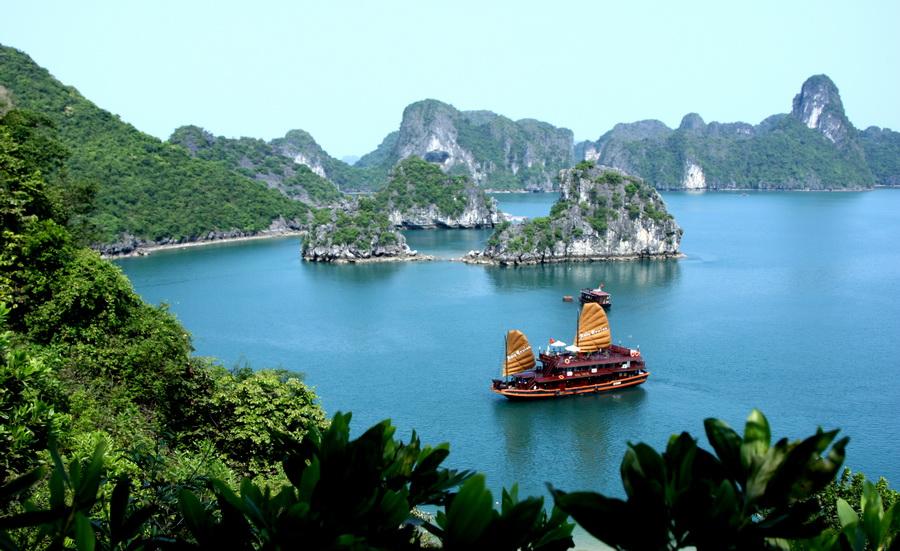 
Halong is a large bay in the Gulf of Tonkin. This is the most popular tourist destination in Vietnam, and all thanks to its unique beauty and originality. Tradition says that the bay was created by a dragon, which, sinking into the sea, created steep shores and numerous islets. The bay is really dotted with many karst islands, which have natural caves that attract tourists. Some of the islands have preserved virgin relict forests, others are entirely considered wildlife sanctuaries.

The entire bay is included in the UNESCO World Heritage List. In addition to natural attractions, there are ancient temples and modern entertainment centers, and most importantly – huge wide beaches, which are considered one of the best in the world – both natural and artificial. Most often, they do not stay in the bay for a long time, but take a sightseeing tour for two or three days to see everything interesting. 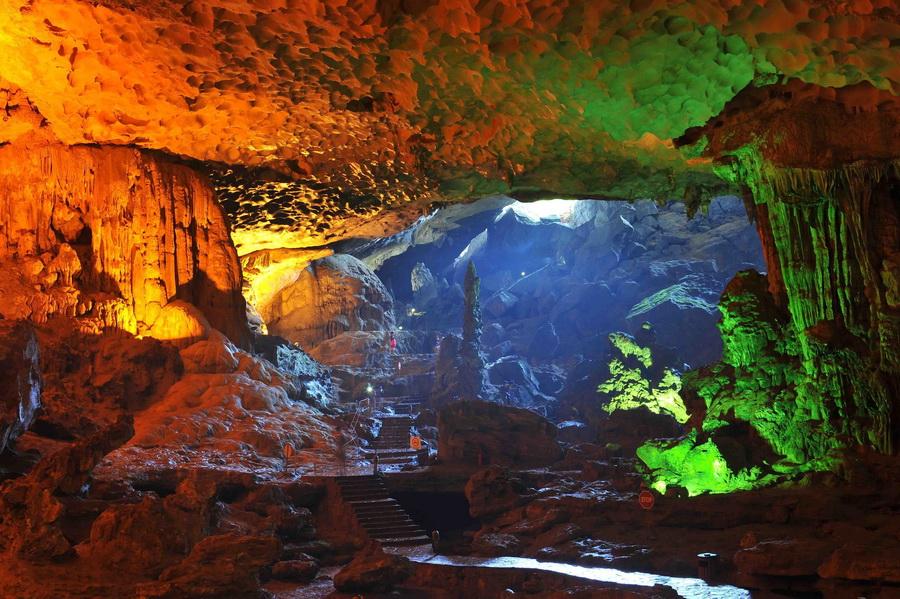 The Surprise Cave is one of the most beautiful caves on the islands in Halong Bay. The entrance to it is in a rock on Bo Hon Island at a height of 25 meters. The entrance offers a beautiful view of the bay.

The cave consists of two grottoes connected by a narrow natural corridor. The first room is small, although you can also see beautiful stalactites and stalagmites in it, but the second part is very large – this explains the name of the cave that has developed in the tourist environment: it starts quite usually, but then a surprise! – a truly magnificent and huge space is revealed. There is a rock in it that resembles a horse – the legend says that this is the horse of the hero Thanh Dong, who ascended to heaven, and left her, because the demons are even afraid of her.

There are wooden paths along the cave, but they can be slippery because it is always wet, so it is better to take suitable shoes.

Drum Cave is one of the most original caves in the bay. It offers a beautiful view, but this is not why she is famous. The cave is not that big, but inside it is a unique sound space, riddled with stalactites and stalagmites and divided into three large halls. The third of them is the largest – so much so that you can even arrange a banquet here.

The cave got its name from the fact that when the wind blows, its complex shape and echo create the effect of a real drumbeat – now distant, now deafening.

Over the centuries, the Drum Cave has hid numerous partisans: there are many passages, niches and secluded places where you can hide from enemies.

The Heavenly Palace Cave was discovered in the mid-90s of the XX century. A thirty-meter staircase leads to it, and it itself is divided into three parts. The height of the largest of them is 100 meters. There are also beautiful stalactites and stalagmites here, especially beautiful given the multi-colored lighting.

It is always damp in the cave and you can see with your own eyes the formation of beautiful icicles and growths – there are places where water constantly drips and the process is visible with your own eyes. The length of the tourist route through this cave is 130 meters.

The legend about this cave says that a heavenly dragon once celebrated his wedding here. The celebration lasted 7 days, by the end of the 7th day, the guests from fatigue turned into bizarre figures, which have since adorned the cave-palace. 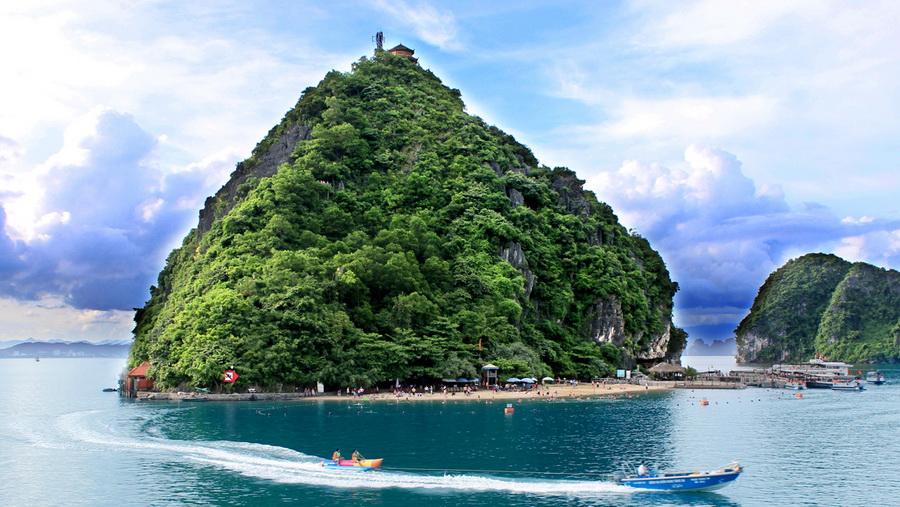 A place that will be dear to the heart of every Russian tourist is an island named after our famous cosmonaut German Titov. The fact is that Titov was the chairman of the Soviet-Vietnamese Friendship Society. According to rumors, he shocked the Vietnamese leader Ho Chi Minh by going to swim in the winter in the water, which was only 16 degrees Celsius – it was just in Halong Bay. For swimming, the astronaut chose a small, unnamed island in the middle of the bay. Shocked Ho Chi Minh named the island after the Russian hero.

In 2015, in honor of Titov’s 80th birthday, a monument to him was erected here. The island is now a tourist attraction. It is so small that there are no hotels here, but there is a small, clean beach, and at the top of the island there is an observation deck, from where the whole bay is visible.

Vietnam is one of the leaders in pearl cultivation; there is also a pearl farm in Halong Bay. Here they can tell in detail about the production of pearls: a blank bead is placed in a mollusk, which, over time, it envelops with a pearl layer. The larger the initial blank, the faster the bead turned out from it, but the lower its quality. Truly priceless huge sea pearls have been cultivated for several years. Here you will open an oyster and show how it looks with pearls inside.

There is a small pearl museum at the farm, where they will show interesting shells and tell you how pearl mining was carried out in ancient times. In addition, the farm, of course, has its own shop, but keep in mind – the quality of pearls here is really high, but the quality of accessories and silver is not very good. However, you can buy not only finished products, but also the pearls themselves, and only then hand them over to a suitable jeweler.

“Paradise” is the longest of the local caves, its length is about 30 km, although, of course, not all this length is available for tourists – they say that cave passages stretch under the sea to the very neighboring Laos. The cave is located quite high, and you will have to climb about one and a half kilometers along a picturesque slope to it, however, you can always rent a golf car here.

Officially, this cave was opened and equipped for tourists in 2010, although the locals, of course, knew about it before. Now there are paths along it, lighting is installed, there are benches, so you can safely enjoy its beauty for at least a few hours.

It is really huge – in some places the ceiling reaches 200 meters in height! Stalactites and stalagmites form the most bizarre forms, resembling people, animals, or exotic carved statues. It was formed, like other caves in these places, in a karst that formed here in the Paleozoic period, it is more than 400 million years old. 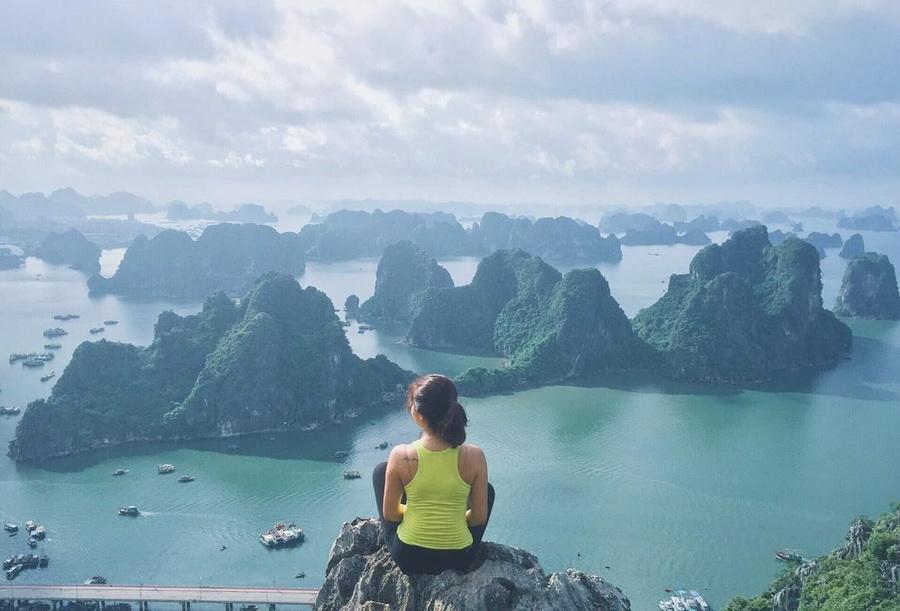 Climbing this relatively low, but very picturesque peak is a poetic entertainment. The fact is that once she so amazed with her beauty the Emperor Le Thanh Tong passing by that he folded poems about her and carved them right on the rock at the foot of the mountain. Since then, Vietnamese poets have come to this place for inspiration, they call it “Poem Mountain”.

The mountain is really very picturesque – it is she who can most often be seen in advertising photographs of Halong Bay and on souvenirs. Poets even have their own ritual: you need to launch a red flying flashlight from the foot of the mountain with some ingenious poetic quote – and then the muse will certainly visit.

Climbing the mountain is paid, there is a well-groomed trail upstairs – in itself it is not difficult, but in summer even in the mountains it can be very hot and humid. But it is from this top that the best views of the sea surface, dotted with islets and ships scurrying between them, open up.

The small picturesque island of Quan Lan is located on the very border of the bay. Its history goes back more than a thousand years – it was once a major trade center. Now it is more of a place for fans of “wild” recreation: foreigners are rarely on the island, the beaches are huge and deserted, and the electricity is turned off at night.

The main attraction of the island is a beautiful temple complex of the 18th century in the village of Quan among the coniferous forest. According to legend, it was built in memory of the battles between the Vietnamese and the Mongols. Yes, in the XIII century not only Russia suffered from the Mongol invasion, but also China and Vietnam! The Vietnamese commander Tran Hung Dao repelled the Mongol invasion in 1287, and this is remembered in Vietnam as we remember the Battle of Kulikovo. At the end of summer, boat races are held on the island, timed to coincide with this holiday.

The complex includes three temples: the pagoda dedicated to Buddha, the temple of the female deity Lieu Han and the Chan Hung Dao temple, which is revered as a saint.

Tuan Chu Island is considered the best resort in the entire bay, despite the fact that it is very small. It can be reached from the mainland by land; a bridge leads to it.

Once there was a summer residence of Ho Chi Minh, and now there are artificial beautiful beaches, hotels have been built and an extensive tourist infrastructure has been created. Here is the largest water entertainment center – you can rent any equipment and take part in any water entertainment. The island is home to Vietnam’s only dolphinarium, as well as a seal show and crocodile show. In the evening, the island is decorated with beautiful singing fountains.

It is here that those who come to see the sights of the bay for one or two days usually stop. 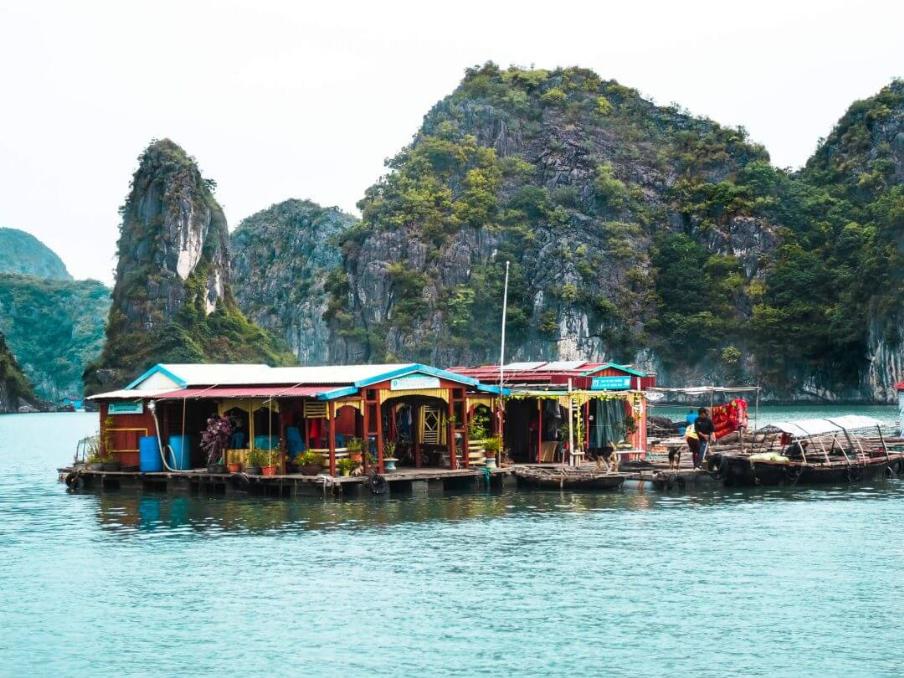 Cat Ba Island is the largest island in Halong Bay. One part of it is considered a national park, while the other is occupied by the usual tourist infrastructure. There are huge beaches, tourist villages, several historical sites: an old colonial fort and temples.

But, of course, the most important thing here is nature. The slopes of the island are overgrown with tropical forests, dense mangroves descend to the coast. 740 plant species grow here and 280 animal species live. Some of them are wild, but the deer are completely tame and go out to tourists right on the road.

The entrance to the park is paid, but the cost of just a pass without guides and excursions is low – about forty thousand dongs, which is a little more than 100 rubles. You can take a guide to take you to the far corners of the park, and you can also go kayaking here.

The highest peak of the island is Ngu Lam Peak. There is a path to it from the entrance to the park, and at the top there is a wooden observation tower, from where you can see almost the entire island.